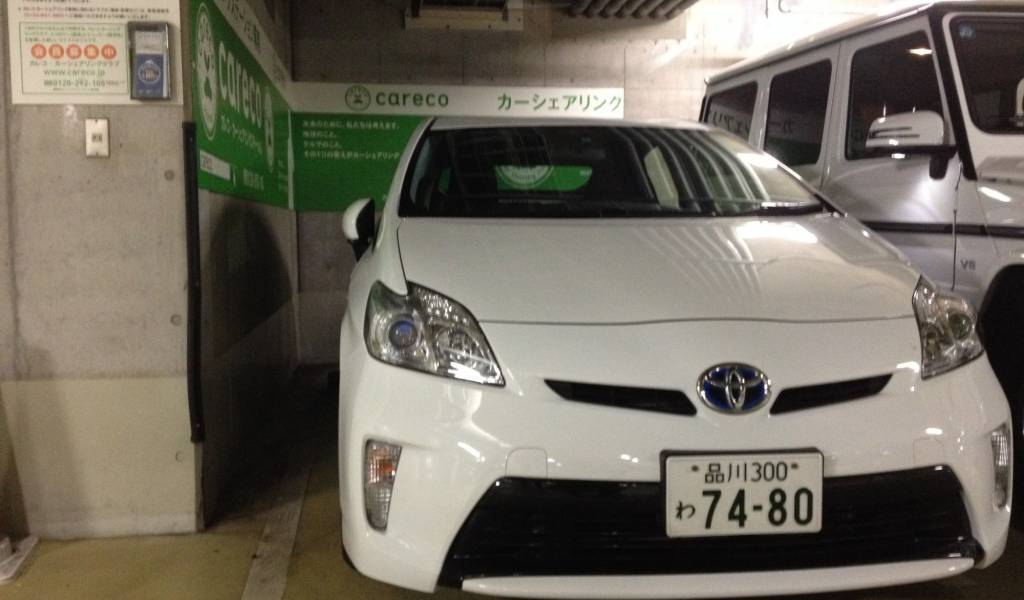 Careco (pronounced ka-re-ko) is one of the big three car sharing services in Tokyo along with previously reviewed Times Car Plus and Orix. Like Times, it’s run by a car park provider – Mitsui Re-park. Compared to Times, the Careco locations aren’t quite as ubiquitous, it’s slightly cheaper and the system is a little clunkier.

As with Times, for any travel up to 6 hours, you pay only for time – not fuel or mileage. However, Careco has a lot more options starting with the basic monthly plans. The two monthly plans (both costing 980yen/month) are the ‘basic plan’ and the ‘weekday plan’. The basic plan has the same rates irrespective of what day of the week you use the car while the weekday plan has cheaper rates during the week and higher rates on the weekend. The rates also vary on which type of car you reserve. Additionally, your monthly fee counts as a credit – so your first 980yen of use for the month incurs no extra charge.

For the weekday plan, check their website. At time of writing there is also an introductory campaign that waives the monthly fee for the first two months.

To sign up, you need three things – a Japanese driving license, a credit card and the ability to read Japanese. While you might be able to stumble through using the translate function in Google Chrome, if Kanji is just a bunch of squiggles to you, we recommend asking a Japanese friend to help. While rental car companies permit international driver’s licenses and the citizens of certain countries to drive with their existing license, it’s unclear whether Careco permits this. Unless you’re from the US or a handful of other countries, getting a Japanese license is relatively easy and doesn’t require a practical test. If you are from the US, check this post on how to get a license.

After applying online (you’ll need to send a scan of both sides of your license), you’ll receive a big pack of documents in the post. Although you can disregard most of them (lots of screens print outs on how to use the mobile site) there is one more step you need to take to activate your membership – call a toll free number. This (as everything up to this point) is only available in Japanese – it’s mainly just them explaining the rules and you indicating that you are in agreement. Once this is done, you can move on to getting yourself behind the wheel.

When reserving a car, you have to first identify the stations (locations with cars) within a range that you specify. This will then give you a list of cars which you can check the availability of. To reserve the car, just select the car you want, enter the start time and how long you want it and hit the “予約” (reserve) button. You should receive an email straight away confirming your reservation.

Picking up and Returning the Car

The basic system for picking up and returning your car is web (not app) based – so you’ll need a mobile phone. After you login to the site using your ID and your chosen password, at the top of the screen, your next reservation will be displayed with a “確認” (check/confirm) link. If you click on the link, there is a start button labelled “利用開始”. Clicking on this will unlock the car – so you should only press it when you’re standing right next to the car! After the car unlocks, you can climb in and extract the key from the glove box. Back on the web, the background colour for your reservation will change to green to indicate that you’re using it. When you return the car, you go to the app, click on the “確認” button again and then to finish use you tap “利用終了”. After a delay of about 20 seconds, the car will lock. Although this system is relatively straightforward, it has some major drawbacks. First, if the battery charge runs out on your phone before you return the car you’re a bit screwed. Also, every time I opened the page I was required to login again – so keep your long ID stored somewhere and don’t forget your password!

If the idea of relying on your flakey phone battery worries you, Careco also allows you to register your Pasmo or Suica to unlock and lock the car.

Do I need this?

If you need regular access to a car (ie. a few times a week) you might as well sign up for both Careco and Times to broaden your availability. Of course going with two providers means you’ll get hit with two monthly fees, but if having a car available is important, it’s still a lot lower than paying interest, parking, maintenance and a shaken on your own car. As we mention in the title, Careco is also marginally (about 5%) cheaper than Times.