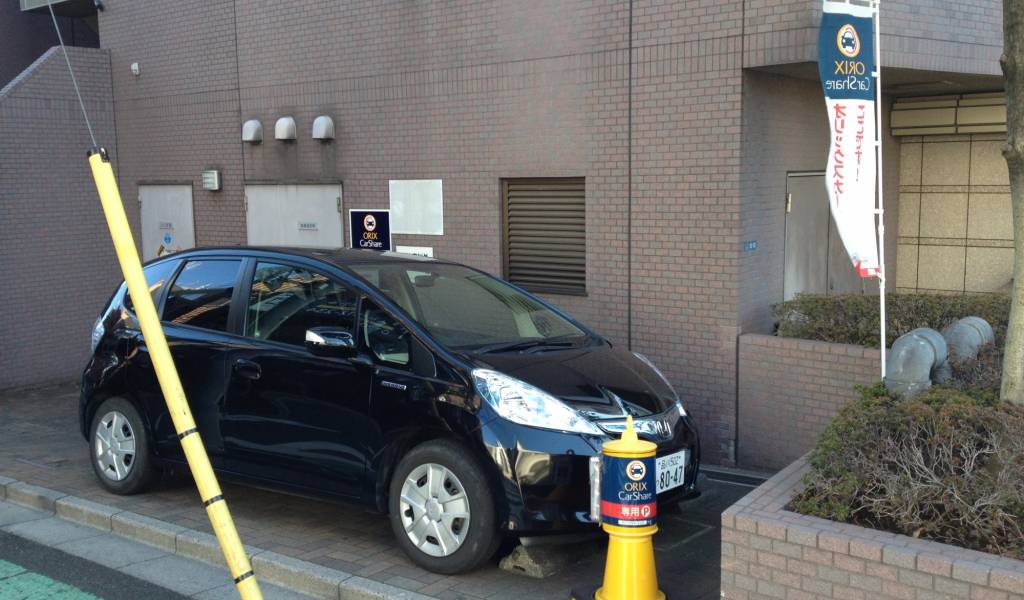 Not to be confused with oryx (a genus of antelope) or Orix Rental Cars, Orix Car Share is the third of the big three car sharing firms in Tokyo—the others being Times Car Plus and Careco.

Unlike Times Car Plus and Careco, Orix Car Share isn’t run by a car parking provider. Some, as in the picture above, are located in the car parking lots of apartment buildings, while you can find others in the same parking lots as cars from the other companies. So if you’re lucky enough to have an Orix car parked at the bottom of your building, it could be worth signing up for. Orix offers more or less the same pricing model as the others (monthly fee + time based fee + per km fee), but it does offer some slightly different plans which might suit your usage pattern better than the others. If you really don’t plan to use the service frequently then the “B” plan, which has no monthly fees might be attractive.

The costs below are for “Standard Class” cars which takes in four categories of cars—compact (Toyota Aquas, Honda Fit, Nissan March, Mazda Demio, Suzuki Swift, etc.); basic cars (Toyota Prius, Nissan Tiida and Honda Insight); station wagons (Honda Fit Shuttle Hybrid); and minivans (Honda Freed). In addition, there is a “deluxe” class which consists of a larger Honda van and also an electric vehicle class which consists of 2-seater Mercedes Smart Cars and the Nissan Leaf. Both the deluxe and electric vehicle classes cost more than the prices shown below. Unlike Times, Orix doesn’t have a line up of premium European cars.

Their own literature points out that the 6-hour pack is cheaper than that offered by either Times Car Plus or Careco. Unless you plan to camp in your car for the duration of the period you rented it for, you will of course rack up those kilometers—at 15 yen/km. Fancy zipping out to IKEA in Chiba? Well, that will add another 600 yen—not to mention the monthly fee (for plan A) is 1,000 yen higher than elsewhere. The longer time packs at the other providers also have per kilometer charges so for the 12-hour pack or the 24-hour pack (available for 6,000 yen) you will likely get better value from Orix than from Times or Careco.

The two basic pre-requisites for joining are the same as for the others—a Japanese driver’s license and a credit card. Sign-up is through the website, and of course there is no allowance for English speakers, so either have a Japanese speaker handy or use Google Translate or a tool like Rikaikun to work out the required data. You’ll also need a copy of both sides of the aforementioned drivers’s license—a smartphone photo will do. After you’ve finished sign-up and your application has been checked, you’ll receive your member’s card with an IC chip in it via the post.

Reserving, Picking up and Returning your Car

Cars can be reserved through the website or through a dedicated smart phone app. The app is quite nice, but is not as quick and convenient as the Times app. Whereas the Times app allows you to only see cars that are available for the time that you want, the Orix app only shows cars that are at a certain station. You have to choose the car type first before you can see its availability.

When it’s your time to pick up the car, find a sticker on one of the windows with a picture of a hand and a card. Touch your membership card here to unlock the car. Once inside, you can retrieve the keys from the glovebox. To return the car you just do this in reverse.