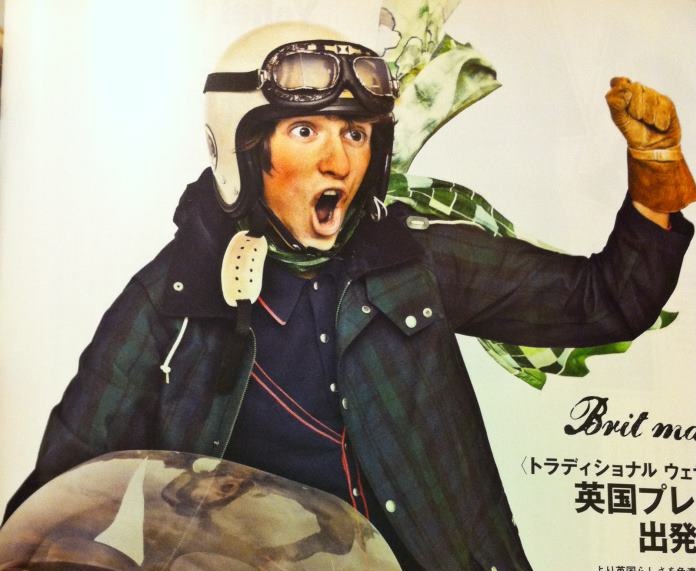 Want an Alternative to Teaching English? Are You Too Sexy for Your t-shirt?

Finding a job in Tokyo was rough being fresh off the boat and not knowing a lot of Japanese. I was that foreigner at every McDonald’s holding up the line pointing and grunting at the menu. It didn’t exactly give me a lot of options in the job market either. I once resorted to waiting at a butler’s cafe in Shibuya where I was paid minimum wage to dress up in a cheap tuxedo and refer to Japanese women as “my princess”. I would kneel at their feet to take orders, lead them by the hand to the toilet, and entertain them with whimsical tales from my time at the castle in the faraway dreamland of Little Rock, Arkansas. I was expected to rehearse every day and whenever customers rang a bell I would yell, “Yes, my princess?” and contemplate what I was doing with my life.

At first, I did what everyone new to Japan does. I found salarymen and housewives willing to pay me 2,500 yen per hour for fake conversations in English. No one likes to admit it, but this work is incredibly tedious and most of your students will eventually realize what a rip-off you’re selling them and bail out. Charging people money for small talk is ridiculous if you’re not actually tutoring them. Besides, unless you are putting in a lot of hours with as many students as possible, you’re only going to be making coffeemoney as most of your students only want one hour per week.

After about three months of no-shows and my conscience eating away at me, I started doing some real job hunting. By that I mean I started searching through Craigslist. I also found luck with dedicated job-hunting sites like Gaijinpot, but nothing was ever long-term. I typically worked as a preschool teacher, where I was essentially a performing clown; shouting out the name of shapes while some kid sneezed in my bento. Also, aheads up for those of you new to Japan who think teaching children would be a breeze. Be prepared to put a little John McClane into your step if you want any kind of chance dodging the constant barrage of fingers that Japanese children will be trying to stick up your butt. This is an actual thing.

By now you’re probably asking what is all this leading up to. If entertaining soccer moms at Starbucks in the guise of an English professor isn’t going to make the yen, then what will? Well, allow me to introduce you to sexy Ace Ventura:

I stumbled into the world of fashion modeling by chance, and I was never by no means a professional, but I still get a lot of people asking me what modeling pays, how to find gigs, who to trust, etc. You probably won’t get a career out of it, but if you want a quick way to earn some cash then it might be a viable option for you. I’ve done it for a few years myself, and while it hasn’t exactly bought me an apartment in Roppongi Hills, it has paid for groceries and kept my cell phone turned on. Here are some basic tips I’ve learned for anyone looking to jump into it.

For starters, I’m serious when I say I stumbled into it. I was literally approached on the street while walking home from school and it sounded like a scam. I mean random people asking for your pants size and email on the street can look a bit shady.
It sounds strange, but editors and stylist will send their assistants to scout people at places like Shibuya Crossing, Harajuku Station, and even universities. They’re usually looking for a certain image or theme for the brand they’re working for. They do this usually because they’re trying to save money, and pick you off the street is a lot cheaper than renting you from an agency (more on those later).

After they collect your information you will probably be contacted and asked to come to an audition with all the other guys wondering if they’re about to be kidnapped. Auditions are absolutely the worst part about the whole experience. They will almost always be in the middle of nowhere and late at night. The scout will usually have you and the other people auditioning wait in a room, and each of you will take turns trying on clothes and being judged. If you are really serious about getting the gig, you should practice your posture and your “cool pose” before the audition. I don’t know what your cool pose is, but I just look at them like I’m angry and they’ve always seemed to like it.

This is also where you’ll find out if you’ve wasted your time or not. If they like you, they will probably have you try on more than one outfit. They’ll all whisper to one another and stare at you a few times. If you get a Kakkoī ! then you’ve more than likely got the job. If they don’t like you, you’ll know it in about 5.7 seconds. You will try on one outfit, or sometimes what we call the “pity shirt”, only to hear “Ok! Thank you!” This means you not only didn’t get the job, but you also wasted money getting there because they will never pay your train fare. Try not to sweat it if you don’t get the gig. They’ll probably take your picture regardless, and if you’re lucky it will get shared in their network for other potential jobs.

Once you actually do get a gig, you’ll have to come back for a fitting and free your schedule for the actual shoot. It could be anything from a magazine, catalog, in-store ad, or even a runway. Personally, I’ve had a lot of good shoots and I’ve had bad shoots. The good shoots either really fun or really short. I’ve been flown to places like Shikoku and Hachijojima which I pretty much treated as a paid vacation. The bad shoots are always long and slow. You’ll find yourself wondering more than once why they had you meet them at 5 a.m. when the shooting doesn’t start until noon.

On the topic of agencies, if you’re really serious about getting into modeling, then freelance probably isn’t going to cut it unless you get really lucky or you’re just Marky Marking like nobody’s business.

I’ve only worked for a few agencies and while I didn’t particularly enjoy the experiences, they will find you a ton of auditions and a better guarantee. The downside is that the auditions you go to will be more competitive, as you’ll more than likely be up against actual professional models. If you’re freelance, you have a much better chance of getting calls from the stylist and editors directly. They might even make you a regular.

Lastly, here is a basic rundown of my experience as a part-time model:

Here are a few well-known agencies. I was personally with Hype and Freewave. Freewave is run by very friendly people, but they’re more of a talent agency. I went to way more auditions for music videos and t.v. commercials than fashion modeling while I was with them.

Written by: Aaron Baggett
Filed under: Business | Fashion | Financial
Tags:
Sharing
Questions or comments about this article?
Start a thread on our community forum
Ask our local experts about Tokyo