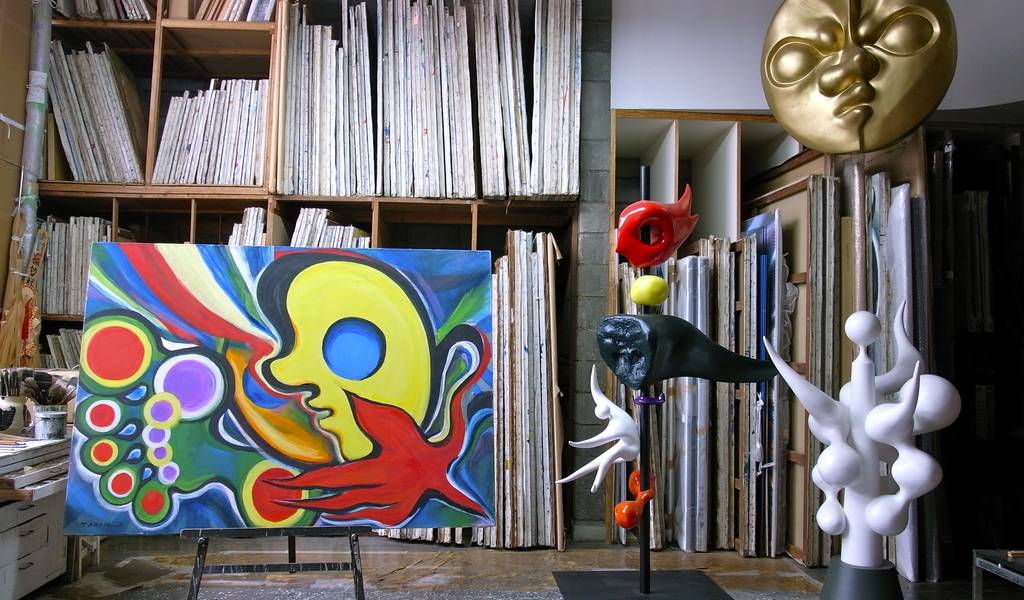 Taro Okamoto is one of the few modern artists who has managed to earn mainstream acceptance. His playful abstract art is instantly recognizable, and his catch phrase “Art is an explosion!” is a perfect description of his vibrant, avant-garde paintings and sculptures. Okamoto spent most of his career working in Tokyo, so there are some excellent places to see his art scattered around the city.

You can find the largest museum of Okamoto’s works in the beautiful Ikuta Ryokuchi Park, located in Okamoto’s hometown of Kawasaki just south of Tokyo. This museum is devoted to Okamoto’s paintings, sculptures, photography, and commercial products. There is also some information about his parents (his father was an illustrator and his mother a poet) and examples of their works as well.

One especially enjoyable feature of this museum is watching the many videos of Okamoto working. Often, the painting being created in the video is hanging on the wall next to the screen, so you can easily compare the work-in-progress to the final result.

Admission to this museum is between 500 and 800 yen, depending on the special exhibition. The closest station is Mukogaoka-yuen on the Odakyu Line.

Okamoto’s massive mural Myth of Tomorrow is found at Shibuya Station in the 2nd floor walkway between the JR and Keio-Inokashira train lines next to Shibuya Mark City. This large painting was commissioned by a high-class hotel in Mexico City, but the hotel never opened due to financial difficulties. Myth of Tomorrow was lost for thirty years until it was rediscovered and given a permanent home in Shibuya in 2008. The mural depicts the horrors of an atomic bomb, but also contains a sense of hope for the future in the colorful figures in the lower left corner. Visiting this landmark painting is free.

Okamoto lived and worked at a studio near Omotesando Station from 1954 until his death in 1996. The studio is now an outstanding little museum in which you can see various exhibitions of Okamoto’s paintings and photography, some of his commercial products, and enjoy a cozy sculpture garden filled with unexpected surprises.

The highlight of visiting this museum is seeing Okamoto’s studio, with paintings lining the walls in racks, a library on the second floor, and his piano in the corner. This museum costs 620 yen. 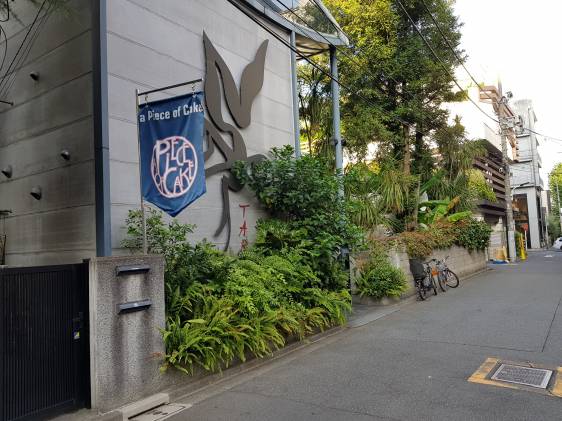 Okamoto’s most-famous work is the Tower of the Sun, which is located in Osaka. This statue became an iconic image in Japan after its unveiling as the symbol of Expo ’70, a world’s fair held in Osaka in 1970. If you are headed to Osaka, consider stopping by this famous statue in Expo ’70 Commemorative Park just north of the city.

Kawasaki Omotesandō Shibuya
Written by: Heike Hoffer
Filed under: Art
Tags:
Sharing
Questions or comments about this article?
Start a thread on our community forum
Ask our local experts about Tokyo