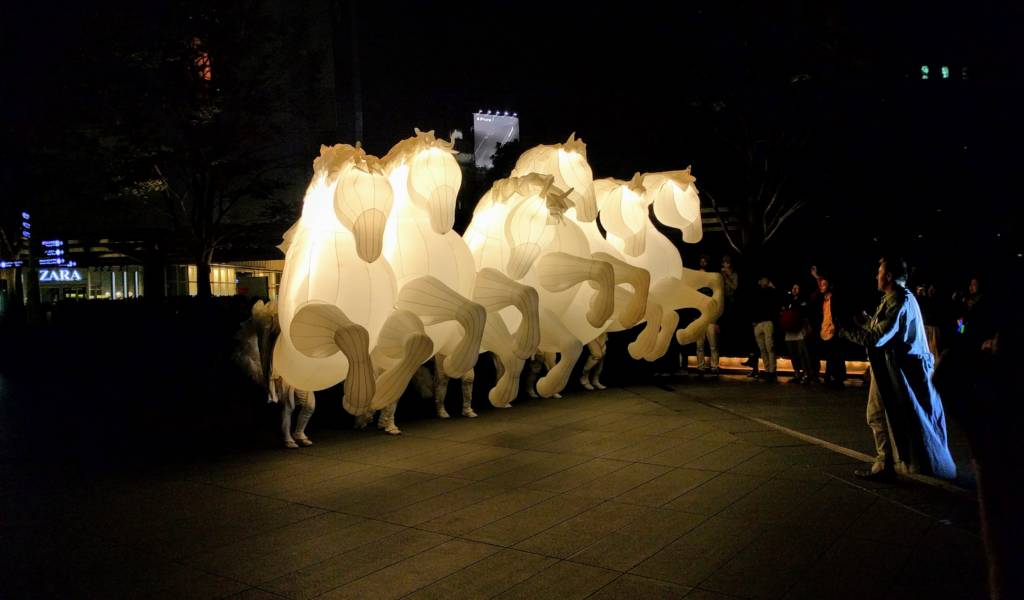 In our last podcast on Cheapo Hanami, recorded on the 9th of March, we predicted the weekends of the 30/31 of March and April 6/7 as the peak hanami weekend.  Alas, the warm weather has made liars of us. This weekend and next look to be the best for enjoying a beer below the blossoms.

If queuing music festival style at toilets isn’t your idea of fun, or you just want to continue the outdoor festivities into the evening, Roppongi Art Night was created for you. As the name suggests, the event runs at night from sunset on Saturday, March 23rd until sunrise of Sunday, March 24th.  The theme of this year’s night is ‘trip’.  With one program called “All night course for total TRIPsters” it’s not completely clear if the theme is akin to ‘voyages’ or if they expect participants to be dropping acid.  Although the cores of activity will be around the National Art Center Tokyo, Tokyo Midtown and Roppongi Hills, this year’s Art Night will be spreading it’s creative tentacles throughout Roppongi. Aside from the big three, 19 other galleries and art spaces including Super Deluxe will be taking part. Closest stations are Nogizaka on the Tokyo Metro Chiyoda Line and Roppongi on the Tokyo Metro Hibiya and Toei Oedo Lines.

Although not strictly a cheapo event, Art Fair Tokyo is on at Tokyo International Forum from Friday, March 22nd until Sunday March 24th. If you can work out how to pre-order, you can pick up a 1 day ticket for 1,500yen. There is also a 3 day, 3,000yen ‘passport’.  The event is quite big, but not so big that you couldn’t cover everything of interest in a single day. On display will be collections from art galleries all around Japan – from modern art through to priceless traditional Nihonga. An added bonus of the ticket, it is that it gives you discounts of up to 200yen at most of the major museums in Tokyo – including the Suntory Museum at Tokyo Midtown and the Mori Museum at Roppongi Hills. If you can’t work out how to pre-order, it will cost you an extra 500yen at the door.  Tokyo International Forum is a stone’s throw from Yurakucho Station on the JR Yamanote Line.

Written by: Greg Lane
Greg's Tokyo favorites are: Shinshu Osake Mura, Kiyosumi Teien Garden, The American Craft Beer Experience 2021
Filed under: Art | Events | Things to do
Sharing
Questions or comments about this article?
Start a thread on our community forum
Ask our local experts about Tokyo