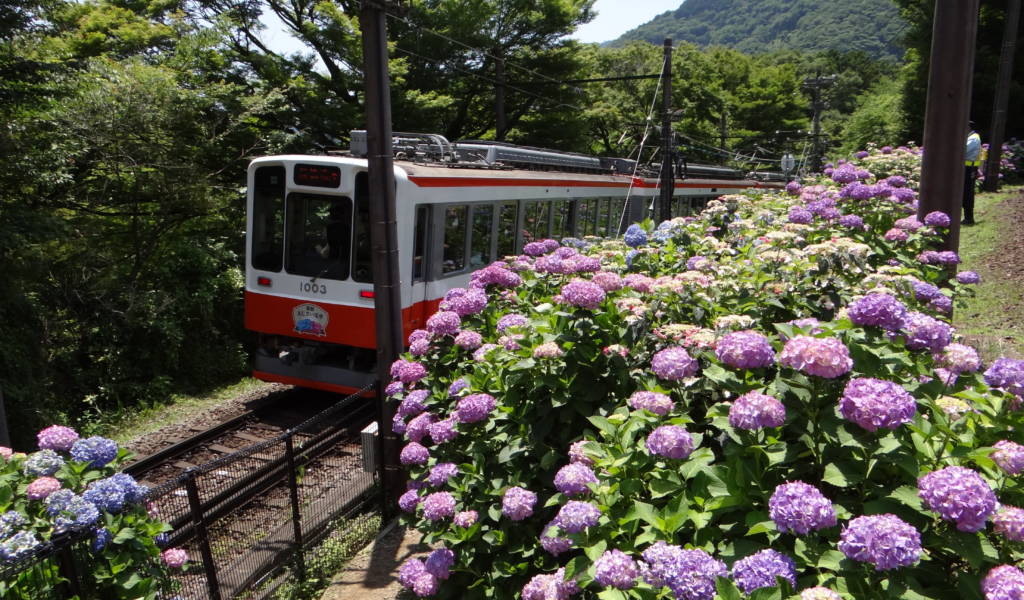 A Ride Through the Wild Side on Hakone's Ajisai Train

Trains can be more than a way to get from A to B, experience the beauty of Japan’s hydrangea season from the most scenic railway journey in the country!

A beautiful journey at any time of year, from mid-June the Hakone Tozan Line becomes a stunning journey through tunnels of lush green forest, over clear mountain rivers and past thousands of brightly colored hydrangea plants lining the tracks. In bloom just before the rainy season begins, ajisai (hydrangeas) are some of the most popular seasonal flowers of Japan, marking the beginning of summer and appearing in a myriad of colors and shapes. Loved for centuries, the Japanese name is believed to come from a gathering of blue flowers, although you can see hydrangeas in a practical rainbow these days.

While there are festivals to celebrate them and plenty of mountainside spots to see them across Japan, this train journey offers a unique chance to view the hydrangeas as you travel to Hakone, another popular tourist spot—killing two birds with one stone!

The journey on the Hakone Ajisai Train

The Hakone Tozan Line is the only mountain railway in Japan and travels between Odawara and Hakone-Yumoto (the lower section) and from Hakone-Yumoto on to Gora Station (the upper section), with three switchbacks along the way. Along the upper section, the altitude increases from 96m above sea level to 541m at Gora Station, meaning the bloom schedule for the hydrangeas is delayed by colder temperatures the higher up the mountain they are. At Hakone-Yumoto, the flowers bloom between mid to late June, and in Gora this takes place from late June to mid-July, meaning you have an extended opportunity to see at least some of the flowers.

One of the most popular spots is Ohiradai Station, which is one of the switchback locations, and is known for its narrow tracks with hydrangeas running along both sides. The flowers here bloom between late June and early July, and it’s a really beautiful spot.

Tonosawa Station is another famous location, as it has a small brook nearby where you can wash your money to ensure it comes back to you (multiplied) in the future. There are two small shrines, one of which is in a cave, and you must pay your respects here before using the small metal pots using spring water. You can also hike up the steep steps to visit Amidaji Temple (above), which is surrounded by over 3,000 hydrangeas which bloom from late June to mid-July and are incredible to see.

If you want to carry on further, you can catch the cable car from Gora Station to Sounzan, although bear in mind it may not be what you’re expecting when we say cable car. More like a modern tram in appearance (see above) it follows tracks up steep slopes to reach the final station, which itself is sloped due to the mountainside. This trip costs an additional ¥420 per person and has more hydrangeas which bloom even later than those at Gora.

Scroll down to see the best options for combined tickets and day passes for the Hakone area!

To make the most of the season, during the evenings there will be evening journeys scheduled to see the flowers with illuminations between Hakone-Yumoto and Gora. The train travels at a slower pace than usual and stops at six specially selected points so riders can enjoy the displays and take photos.

There are opportunities to get off at Miyanoshita Station on the Gora Line or Tonosawa Station on the Hakone-Yumoto Line to take more photos before it leaves again, so the trip is perfect for any budding photographers. The lighting for the displays uses green energy and this is the 10th year they have endeavored to use the most environmentally-friendly energy source.

While tickets for the regular day train can be bought as normal, tickets for the special night train require advance booking and a seating cost of ¥310 in addition to the regular ¥400 train fare each way (the Hakone Free Pass is also accepted—more on that in the Getting There section).

The special train services will run from June 16–July 4. Between June 16–21 and July 2–4, a wide-window train will be used for an even better view of the flowers.

Departure times are just after 6:50pm and 8:13pm every night. On the nights where there four trains, service also runs at 7:14pm and 8:18pm. Times may differ by a few minutes depending on weekday vs. weekend, but we have included the earliest option here so you’ll be on time.

Easily accessed from Shinjuku via the Odakyu Line, you can catch a regular train to Odawara which takes 90 minutes and costs ¥880, or a Limited Express train which 70 minutes and costs ¥1,770. Odawara can also be reached using the Shonan-Shinjuku Line but this journey takes 75 minutes and costs ¥1,490, so it’s best to stick to Odakyu! From Odawara, the journey to Gora is ¥670 one way for adults and ¥340 for children.

The Hakone Free Pass can either be purchased at Shinjuku Station for ¥5,140 or from within the ‘free’ area for ¥4,000. If you purchase the ticket in Shinjuku you can travel down to Odawara on the Odakyu Line and catch the Tozan Line from there, which is covered on the pass (along with the Hakone Ropeway, the Hakone Tozan Cable Car, the Hakone Sightseeing Cruise and the Hakone Tozan Bus). The pass also provides discounted entry to sightseeing destinations, galleries and parks and is valid for two consecutive days.

For ideas on what to do in Hakone have a read of this article, and for Tokyo to Hakone transport, read this one for more details!

Alternatively, if you’re keen on sticking to the Tozan train and cable car, there is a one-day pass which allows for free travel between all stations for a full day. This costs ¥1,540 and means you can hop on and off to take all the photos you like!

Written by: Lily Crossley-Baxter
Lily's Tokyo favorites are: Shirohige Cream Puff Factory, Anata No Warehouse, Todoroki Valley
Filed under: Outdoors and Nature | Things to do
Tags:
Sharing
Questions or comments about this article?
Start a thread on our community forum
Ask our local experts about Tokyo