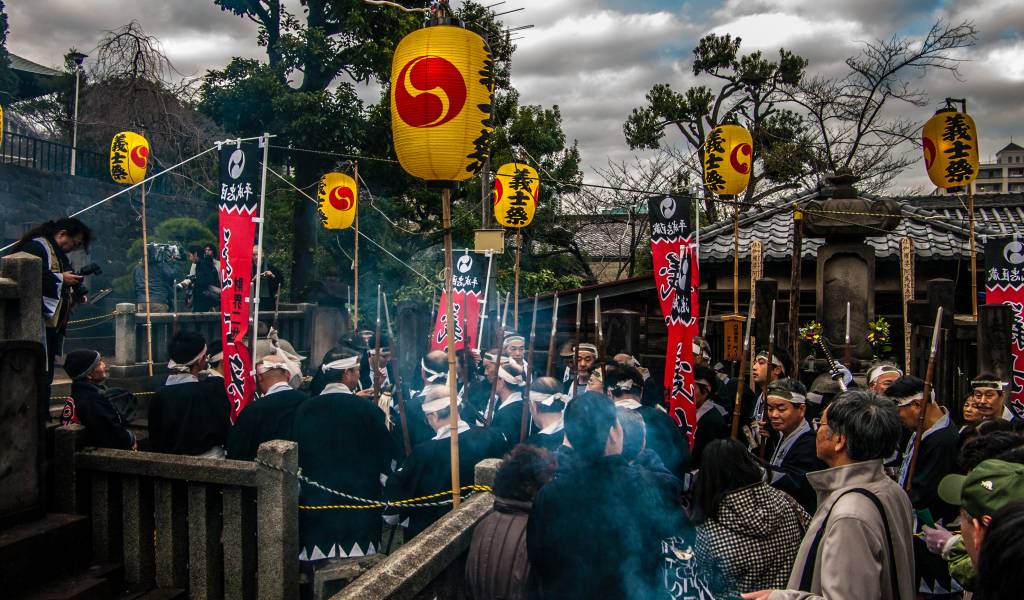 There Were Only 46: The 47 Loyal Samurai from Ako and Their Festival

It was snowing that night of January 30, 1701 (or December 14, 1702 by the old Japanese calendar), but the 46 samurai didn’t seem bothered in the slightest. They walked silently from Ryogoku—not far from where the sumo arena, Kokugikan, now stands—to Sengakuji Temple in Shinagawa (about 10 km) with a single mission: to lay in front of their former master’s grave the head of the man responsible for his demise, Kira Yoshihisa—a 62-year-old master of ceremonies for Tokugawa Tsunayoshi, the fifth Tokugawa shogun. When they arrived at the temple, they washed the head in a well, put the head on Asano (Takumi-no-kami) Naganori’s grave together with a dagger, lit the mandatory incense sticks, gave their money to the temple’s abbot and then left to surrender to the authorities.

This is the final act of a story that had started two years earlier in 1701: Asano, the daimyo (feudal lord) of the Ako Domain in today’s Hyogo Prefecture had gotten into a spat with Kira in the shogun’s castle and after having suffered several insults, he pulled out his dagger (yes, *that* dagger) and attacked him. Using a weapon in the castle was an act punishable by law, so Asano was sentenced to commit seppuku (also known as “harakiri” or ceremonial suicide) and his retainers became ronin or “masterless samurai”. Feeling that their master had been wronged, 47 of them, led by Oishi Kuranosuke Yoshitaka/Yoshio, planned their revenge on Kira. They stayed low for two years so the authorities wouldn’t suspect anything, and on January 30, 1703 raided Kira’s mansion and took him and his personal guard.

That’s the way the story goes, and that’s the way it lived in legend and song—first in the Bunraku puppet theater, then in kabuki and then in film, TV dramas and pretty much every other entertainment medium. Although in history books it’s known as the “Genroku Ako Incident” (“Genroku” being the name of the 1688-1704 period) most Japanese know it as “Chushingura” or “The Treasury of Loyal Retainers”, i.e. its title in the theater, literature and movies. And it stands to reason: by all historical accounts (and you can find most of them in what is probably the best Japanese history resource on the internet, the “Samurai Archives”, and especially here) the story was completely reversed with Asano being the real bad guy, Kira being a rather harmless bureaucrat and Oishi and his merry men being self-centered and with ulterior motives.

But no one really cares: people love a good drama and the fictionalized version has so many of the stereotypes that people (even Japanese people) love to see in Japan; this is proven by the controversy surrounding the incident even back in 1703 with public opinion and pundits equally arguing whether what the 47 did was actually honorable or devious and cowardly. Today the story remains one of Japan’s best known samurai-related events and every year Sengakuji Temple features an “Ako Gishi Sai” to commemorate. The date of the festival is December 14, the current calendar day that corresponds to the day the raid in Kira’s mansion took place.

Despite is significance for the Soto sect of Zen Buddhism, Sengakuji is a rather small temple. If it wasn’t for the graves of Asano, his wife and the 46 samurai that starred in the incident (yes, they were 47 in the original but one of them, Terasaka Kichiemon left before the raid) only hardcore Zen Buddhists would visit it. Because of the incident though, it is one of Shinagawa’s most prominent tourist destinations and there’s always (always) incense burning in front of the graves. And on December 14, the mandatory food stalls are  set around the souvenir shops in the narrow street leading to the temple and the crowds gather from early in the morning to watch the memorial service and the parade of 46 local residents dressed in the clothes the Ako Gishi (i.e. faithful Ako samurai) wore that day.

If you want to get there, and all in all it’s not a bad way to spend a morning, the whole affair starts at 11:00 with the memorial; the actual service offers little more than the opportunity to see many Zen priests/monks at the same place (I don’t know why but apparently people seem to believe that Zen priests are something special: they aren’t really). If you care for that sort of thing you should better get there at least by 10:00 because the memorial is performed in front of the graves and the place isn’t exactly designed to accommodate huge crowds. Together with the priests there will be the 47 who will raise their swords and swear revenge; then they will leave, go out to, ahem, kill Kira and return at around 15:00-15:30 to do the rest of their grim ritual with the head conveniently carried in a cloth bag.

Suggested Activity
Once-in-a-Lifetime Samurai Experience in Tokyo
One of the coolest things to do in Tokyo: Discover the samurai practice of Kenbu Tachibana Ittoryu, a special sword performance. During your class you’ll dress up in a samurai outfit and train with a katana (single-edge samurai sword). A photo shoot is included. Great experience for families and children!
Click here for details

Is it worth attending?

The final question is of course, is it worth it? If you want to be a part of (OK, a witness to) something that is deeply ingrained in the Japanese psyche, absolutely yes! I doubt there is one Japanese alive who doesn’t know the legend of the 47 loyal samurai from Ako or hasn’t seen/read at least one of its various dramatizations. Granted, you don’t get to see much action but the links to the past are there (the graves are real and so is the well where they washed Kira’s head and their personal items on exhibition in the small museum in the temple grounds) and you can see that people have a real emotional connection to what’s been going on.

And if you’re looking for the surrealistic touch, follow the members of the troupe after the event is over: invariably you’ll catch them going into some local eatery for food and drinks and trying to accommodate swords and spears in a McDonald’s can make for some pretty interesting pictures.