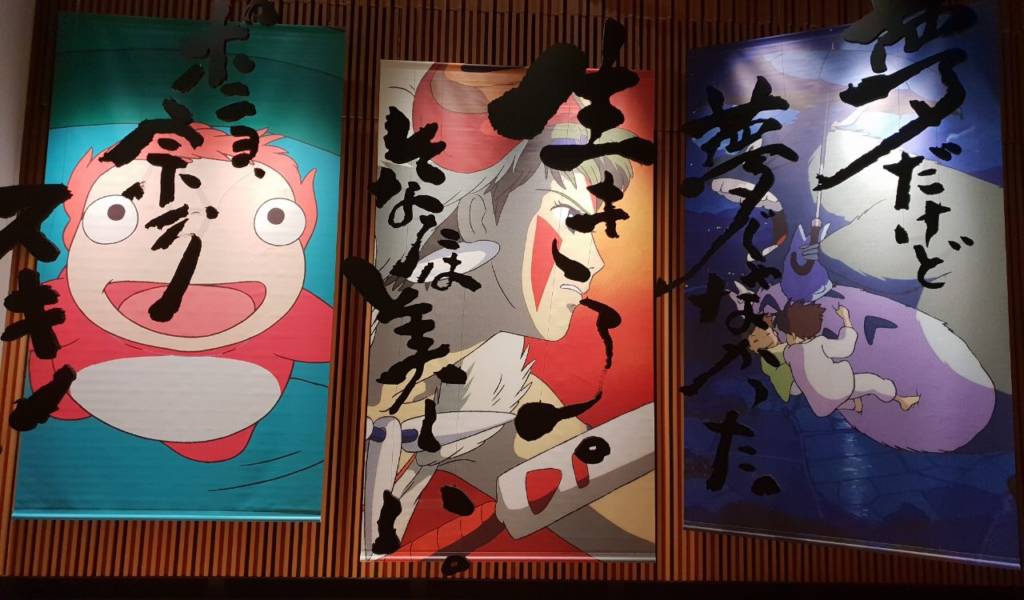 Any talk about Studio Ghibli will bring to mind the legendary Hayao Miyazaki or Isao Takahata, but perhaps some fans may be less familiar with Toshio Suzuki. As the producer and former president, Suzuki is as integral to the studio’s success as Miyazaki and Takahata. Thanks to the dynamic trio of Miyazaki, Suzuki, and Takahata, Ghibli films are critically acclaimed, well-loved hits all over the world.

If you’re a Ghibli aficionado and/or you want to know more about Suzuki, you’re in luck! April 20, 2019 marked the launch of a Suzuki-centric exhibition, simply called Toshio Suzuki and Studio Ghibli. Held at the newly opened Edo Culture Complex (EDOCCO) center on the grounds of Kanda Myojin, one of Tokyo’s most famous shrines, the exhibition runs from April 20 (Saturday) to May 12 (Sunday), 2019.

What to expect at the Toshio Suzuki and Ghibli Exhibition

In addition to being a co-founder of Studio Ghibli, Suzuki is also a talented calligrapher, so the exhibition features some of his writings. Suzuki is a believer in the power of words, and indeed, as you walk through the venue, you too will feel the magic of words.

You’ll see Suzuki’s inspirations—old-school, Showa-era (1926-1989) manga and films—and learn more about the trajectory of his career. While explanations are only in Japanese, and there are sadly no multilingual audio guides as of this writing, there’s more than enough for you to see and enjoy even if you can’t understand Japanese. If you’ve ever wondered what anime magazines from the ‘70s looked like, or what a handwritten thesis looks like… well, you’ll wonder no more once you check out this exhibition.

Suzuki’s love for the written word didn’t just stop at calligraphy; his way with words also helped him brilliantly craft the copy for Ghibli films’ promotional materials. Did you know that the taglines for many Ghibli films have the word “live” (ikiro in Japanese) or some variation of it? Thanks to this exhibition, now you know! Be sure to have a look at Suzuki’s documents, notes, sketches, handwritten versions of Ghibli films’ taglines, and more.

And now for the fun part. Time to have your fortune told. Take your pick from the imposing Yubaba or her twin sister Zeniba, who’s just as imposing. Yubaba’s got luck-related fortunes up her sleeve (er, mouth), while Zeniba has love-related ones. Unfortunately, you can’t line up for both.

Reach into either sister’s mouth, pull out a number, and head to the nearby drawers. Find your number, and take a fortune. Don’t worry; this one’s got English translations. Heed Yubaba’s reminder to take good care of your new “name” (i.e. fortune), and off you go.

Finally, at the end of the exhibition, you’ll find merchandise, in case you want to take home the magic with you. Not only event-exclusive items, but also some popular items from the Ghibli Museum in Mitaka, are in store.

Downstairs, you’ll also find the shrine selling limited-edition Ghibli-themed omamori (charms) and ema (prayer tablets). While ema are typically used to write prayers or wishes, and then left on shrine grounds, you can take these tablets home.

While you’re at it, you might as well check out the rest of what EDOCCO has to offer.

If you visited Kanda Myojin in the mid-2010s or earlier, you’ll be surprised to know how much Kanda Myojin has changed in recent years. For one, it has fully embraced its image as an otaku (geek)-centric shrine, with it now permanently offering anime-themed souvenirs and shuincho (books for collecting seals from temples and shrines). But on top of that, EDOCCO opened in December 2018 to cater to those with a taste for the traditional.

Don’t expect things to be too traditional, though. Think of EDOCCO as tradition repackaged for modern sensibilities. On the first floor, matcha salt, traditional sweets, pudding (which the shrine promotes as its signature sweet), sake, and more come in stylish packaging.

Meanwhile, Masu Masu Cafe, also on the first floor, offers both traditional fare (such as set meals called gozen) and modern Japanese cuisine, such as matcha parfait served in a masu (a wooden box usually used to serve sake).

Throughout the duration of the exhibition, they’re also offering special Ghibli-themed menu items: a Soot Sprite matcha set (¥864), Haku’s onigiri set (¥864), and a Totoro-themed kakigori (shaved ice dessert, ¥648). The last two items are only available in limited quantities, so get there early if you want to try them!

You can check out EDOCCO’s first floor and basement (which has a kimono shop) without an exhibition ticket. If you can’t make it to this exhibition (or even if you made it), EDOCCO’s worth visiting again in the future, as the center has much more cultural events and workshops in store.

Can’t make it to the exhibition? Check out the permanent Ghibli Museum in Tokyo.