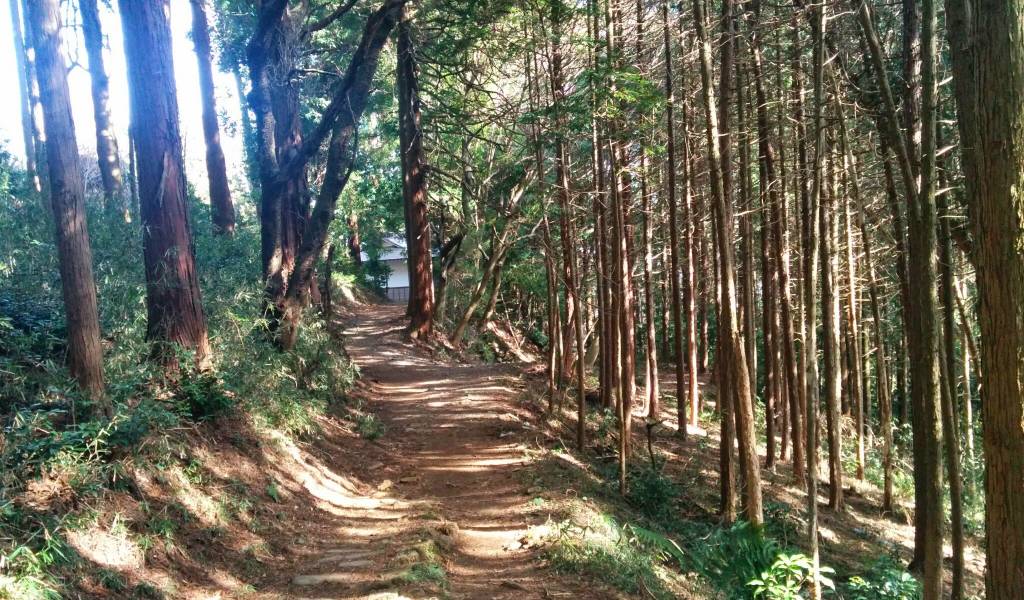 Many people who want to go hiking near Tokyo usually end up at one of a handful of rather popular (busy) hiking spots, however being Japan (which is something like 80% mountains) the Tokyo area is still absolutely stuffed with hiking options and you can easily find some quiet routes away from the marauding hordes and souvenir shops.

The Koburi Pass in Saitama is one such spot. It’s easy to reach by train comes with spectacular scenery, views, is an easy hike and for a spot just 90minutes from central Tokyo it’s hard to beat for complete rural and peaceful immersion. And it scores bonus points for being on the Seibu line, which makes it quite a cheap train journey (Mount Mitake in contrast costs almost twice as much to reach despite being a similar distance from Tokyo being on the JR line).

Depending on your exact route, the hike is across mountain/hillside paths and roads takes three to five hours – you can easily extend by exploring the area further. With a climb of about 350m so it’s fairly easy, but quite steep at times. The hike can be done all year round, but be warned that it’ll be quite hot in the Summer so do bring plenty of water. You’ll probably want to bring your own bento, though there is a couple of eating spots at the pass itself.

How To Get There

The nearest train station is Agano (吾野). One needs to take the Seibu Ikebukuro line to Hanno (the train leaves from Ikebukuro, but approx once an hour connects with the Fukutoshin/Toyoku line so you can catch a direct route from Shibuya or even Yokohama), then transfer to the Seibu Chichibu line (西武秩父線) and take it a few stops to Agano (吾野). There is a limited express Seibu train from Ikebukuro to Hanno which shaves 5 – 15mins of your journey, but the true cheapos amongst us will of course have no interest in paying the extra 500yen. The non-express journey should take about one hour from Ikebukuro.

Some Koburi Pass directions in English and cheapo commentary:

Once you alight at Agano Station, take a right and follow the Koburi pass – “顔振峠” sign down some steps and right again along a quiet road:

NB If you don’t read Kanji, then download this picture, you’ll be following signs like this during the first part of the hike:

After a few minutes of walking, you need to take a left to the underpass, under the main road:

Once you cross under the main road, you go up a slope and past a school (on your left) and down again then take a right following the hopefully now familiar 顔振峠 sign. Finally you’ll see another sign pointing you left to the road that winds up into the mountain, and a while down this road you eventually you’ll get to the entrance to the path:

The next part of the route is a fairly steady climb through forest, probably about 300m in altitude gain. Just keep following the same signs taking you up the mountain. At one point you cross over a road and a few steps later there’s a great view of the valley on one side and a shrine on the other:

A few steps further and you come back to the road with a couple of eateries. If you didn’t pack lunch, then this is your last chance to grab some eats before the end of the hike. In fact both restaurants are good spots to take a break, bask in the view quoff some delightful Japanese grub for fairly cheap. Also if the visibilities is good, you should be able to see Mount Fuji just poking it’s head over the ridge on the otherside of the valley.

For the next step you have a choice:

A) You can either follow the road to the right and keep an eye out for the trail to Suwa Shrine (諏訪神社) which heads off to the left after about 5 mins.

B) Or you can follow the trail heading further uphill another 5 mins to a view point, which starts from behind the eatery. The view point at the top is a small clearing with an unobstructed view of most of Saitama.

After the view point, continue along the trail back through the woods and looking out for the Suwa Shrine signs:

From either route, after a further 10 mins or so, you should reach the Shrine.

Once you’ve had your fill of Shrine, head down to the clearing area, which slightly resembles a car park, and look for the sign to “Yugate” (ユガテ):

From here on, you should follow the signs to Yugate, and eventually to the station Higashi Agano (東吾野). Just a few meters down the trail there should be a sign in Japanese saying “Can you see Tokyo Sky Tree?”. If the visibility is good, then you should have a pretty epic view of Saitama and Tokyo plus can most probably detect a tall dark structure (the SkyTree) in the distance, a bit to the north of the skyscrapers of downtown Tokyo.

Keep following the trail, and after a few more minutes you’ll see fork with a sign post to Ogamiyama (上越山), or to continue to Yugate. If you feel like some exercise then take the short sharp ascent up Ogamiyama for some further views. Otherwise just keep following the signs to Yugate.

5. Along the ridge and back down again

For the next 30 mins to hour, just keep hiking along the ridge and following the signs to ユガテ. The trail crosses over the road a couple of times, but just keep following the signs and you’ll be on the right track. Eventually the trail brings you to just above Yugate which is a pleasant spot full of flowers and blossoming trees (Hint: Spring is probably the best time to be here). You can descend down to Yugate to the left side of the ridge, and the path to Higashi Agano station is down the right side of the ridge.

It takes a further 45 mins to descend through the forest and follow the road to the Higashi Agano station, and it’s all pretty clearly sign posted.

Open with Maps
Written by: Chris Kirkland
Chris's Tokyo favorites are: Tomoe Sushi, Borne, Udagawa Cafe Suite
Filed under: Outdoors and Nature | Things to do
Tags:
Sharing
Questions or comments about this article?
Start a thread on our community forum
Ask our local experts about Tokyo