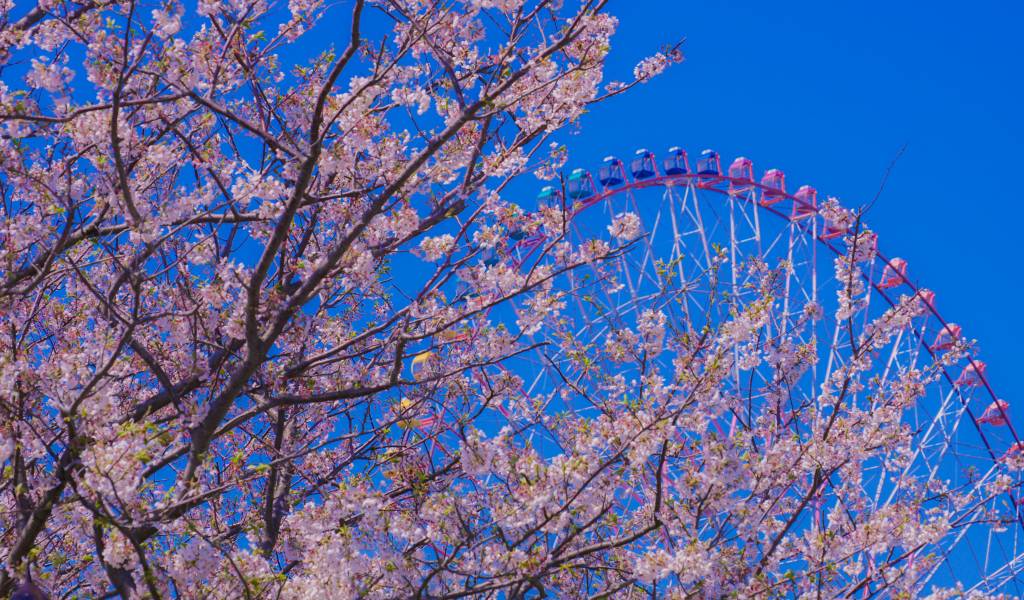 If you’ve ever taken the Keiyo line from Maihama station after a day out at Disney, you may recall having passed a large illuminated ferris wheel; that would be the Diamond and Flowers Ferris Wheel, the second largest in Japan. It also happens to be the most prominent landmark of Kasai Rinkai Koen; an expansive open area with a variety of free (and some cheaply priced) attractions. Upon exiting the station during summer months you will find yourself greeted with a fountain gushing water for the kids to frolic amongst and cool off (though if you’re a big kid and you feel like giving it a go, I doubt anyone would object too forcefully).

There are food trucks and small kiosks offering foods like curry, franks, shaved ice and ice cream throughout as well as a beer garden (a tall frosty mug of Asahi runs about 700JPY while a plate of yakisoba or steak is about 800JPY, but the garden will likely close once harsh weather sets in). Naturally, the cheapest options would be to pack your own or buy a half priced bento or some onigiri. Beverages are readily available at the Newdays conbini immediately to the left of the station exit.

The park runs along the water front with many themed areas to explore; a traditional Japanese garden, the bay front area with excellent views of the city (and fishing if you want to try your luck at catching your lunch, to be grilled at the nearby barbecue area), a small field full of flowers, picnic tables (notable were the heavy stone ones I saw drifting dreamlike in a field of knee-high grass) as well as many walking or jogging trails. If you don’t mind parting with 700yen, there is a large Ghibli-esque aquarium called “Tokyo Sea Life Park” that is open until 4pm. It’s a beautiful facility and a lot of fun to explore, with lots of activities for kids to enjoy- and penguins! Who doesn’t love penguins? Plenty of seating available, too, in case it’s too hot and miserable to enjoy your time outdoors and you’d like to watch the tuna swim in circles for awhile.

Don’t forget that astounding ferris wheel; for ¥700 you can spend 17 minutes making a slow rotation and taking in the view. The Sky Tree is clearly visible, as is much of Tokyo; particularly beautiful during sunset. From November to March there’s a good chance that you can spot Mount Fuji stoic in the distance.

For more information, here is a link to the Japan National Tourism Organization site covering the park; Kasai Rinkai Koen

Open with Maps
Kasai Rinkai Park (葛西臨海公園)
700yen for the ferris wheel
Rinkaicho, Edogawa-ku, Tokyo
Kasai
Official Website ⚠️ Link in Japanese
Written by: Jessica Robins-Eads
Filed under: Outdoors and Nature | Things to do
Tags:
Sharing
Questions or comments about this article?
Start a thread on our community forum
Ask our local experts about Tokyo