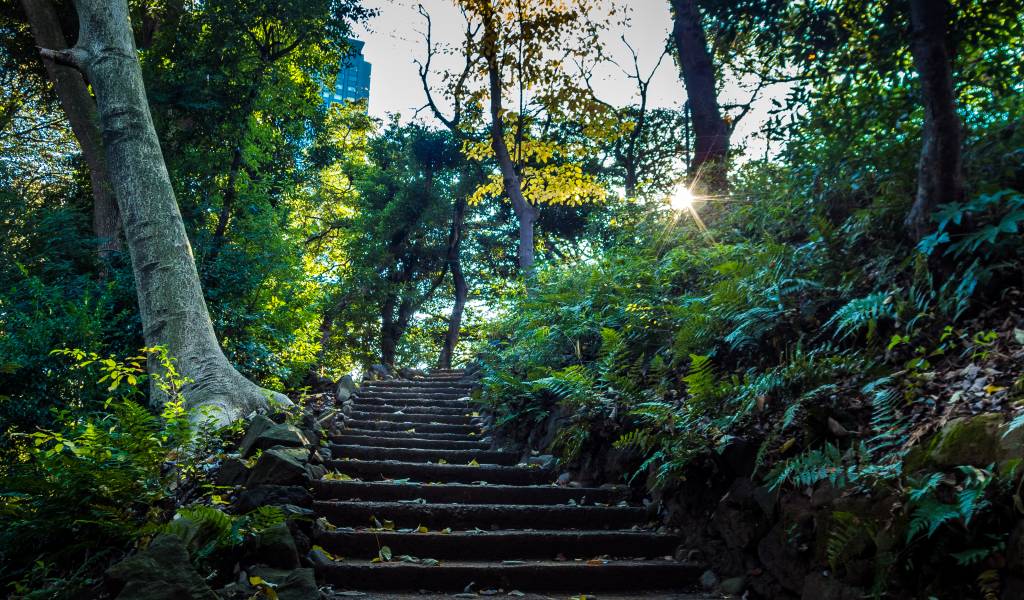 The Giant Tomb Next to the Tokyo Tower...Have You Noticed It?

My first experience with an actual kofun was rather awkward: I had spent a very tiring and extremely hot day at Zojoji Temple in Minato Ward, which is arguably one of the most important temples in Tokyo. Located almost exactly below the temple is Tokyo Tower—just one of the pairings responsible for the cliché about Japan being a land of contradictions—and at some point I went to the Shibakoen Park right next to the tower for a rest and a cold tea. The park is actually a big square with grass and benches around it and in the back I saw a hill with trees and everything and thought, “Well, that’s a nice place to sit down and contemplate the wonderful contradictions of Tokyo” (clichés are clichés for a reason, after all). The hill wasn’t very big, just a few steps to its top and up there there was another plateau with benches and a small shrine and a couple of monuments so I sat down and drank my tea and smoked my pipe and, well, contemplated and then got up to leave. This time I went down the other way (there are two paths) and as soon as I was down, I saw a sign that read “Maruyama Kofun”. And of course my reaction was “What?! *That’s* a kofun?! That’s a friggin’ hill!”

The thing is, it *was* a kofun; actually it was (and still is: it’s dated to the 5th century so if it has lasted  1,500 years it will probably last another few) the biggest of its kind in Tokyo. I’ve read that out of the 161,560 kofun in Japan over 200 are in Tokyo, but the only other that I know of is the Musashi Fuchu Kumano Jinja Kofun in Fuchu. The problem is that these structures are huge so the only way to understand that they are indeed a structure is if you see them from above (above like “helicopter”, some of them are longer than the pyramids). Maruyama Kofun in Shibakoen is 557 ft (170 m) long and 26 ft (8 m) high, hence my thought that it was a hill, but the ones in Osaka’s Sakai  area (aka Mozu and Furuichi Kofungun) or the Saki Kofun in Nara are much bigger.

OK, so we established that kofun are old and that they are huge. But what are they? Well, you could think of them as the Japanese version of the aforementioned pyramids: burial mounds of important people of early Japan (roughly from the 3rd to the 7th century)—and in this case “important” means people from the Yamato state, i.e. the beginnings of Japan’s race and especially its Imperial Family (some of them  are even believed to contain the remains of early emperors and empresses). Therefore it’s no wonder that they are considered private property of the Imperial Family and fall under the jurisdiction of what is probably Japan’s most powerful public service, the Kunaicho or Imperial Household Agency. Being responsible for the kofun, the Kunaicho has restricted the archaeologists’ access to them; the official reason is to not disturb the dead but there’s also some speculation about the possibility of the discovery of unwelcome ties to Korea (kofun have been found in Korea as well).

The most distinctive characteristic of kofun (the word, by the way means “ancient mound”) is their shape: they look like keyholes with an oblong part and a round part—not all of them have this shape but the biggest do and the Maruyama Kofun does too. As expected, the oblong part is the entrance and the round part the funeral chamber and they were created by megaliths (i.e. huge stones: think  Stonehenge). In some of them that have been excavated, funerary objects and human remains have been found: if you have seen the Haniwa terracotta clay figures that are among the oldest pieces of art in Japan, this is where they come from. Kofun were important enough to signify a whole era in Japanese history: its the period from 250 to roughly 540 CE and facts from that period are contained in Japan’s earliest records, the “Kojiki” and the “Nihon Shoki”.

So enough with the history lesson: should you go to the Maruyama Kofun? If you are going to Zojoji and/or the Tokyo Tower anyway, certainly! It makes up the most park-like part of the Shibakoen Park, it’s nice and quiet and there are also a couple of interesting smaller shrines to see—the one on the kofun’s top, at the place were the round part of the kofun meets its oblong part is Maruyama Zuishin Inari Daimyojin, complete with red torii gates and all. Also you can find a monument dedicated to Tadataka Ino (1745-1818), the man who created the first map of Japan using modern surveying techniques: it is right on the center of the plateau in the top of the kofun’s round part. And yes, if you stop and think where you are and when it was built, you will get an opportunity to contemplate the contradictions that make up Japan—but in this case, it won’t be a cliché.