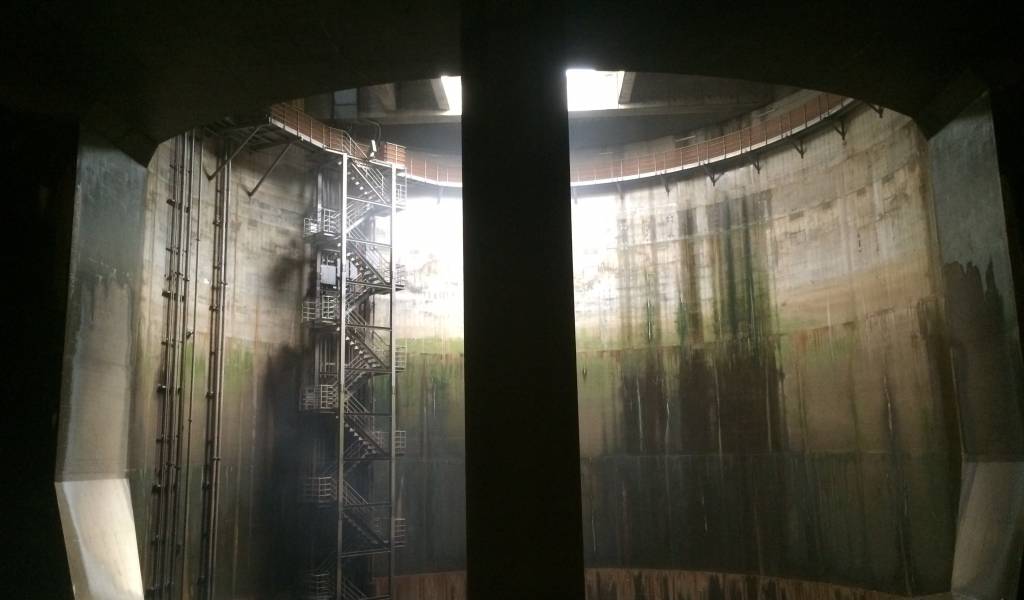 Looking to do something way, way off the beaten track? Take yourself on a tour that is so far removed from the usual tourist routes it’s underground. No really. Go play in a giant drain on the edge of Tokyo.

Ok, before you sharp-eyed cheapos start clamouring, we need to admit something. Technically, the subject of this post isn’t a drain. It’s an “underground discharge channel” that diverts water overflow from rivers to avoid floods. You try working that into a punchy title. And good luck making puns. To avoid this article going down the tubes, we’ll be sticking with the word “drain”.

Seriously though, the proper name for the series of big concrete silos and tunnels between Tokyo and Saitama (with the HQ in Kasukabe, Saitama) is The Metropolitan Area Outer Underground Discharge Channel, also known as the G-Cans Project. You can do an hour-long tour of a section of the facilities, for free. The only thing you need to pay for is the transport to the visitors’ centre (“Underground Exploration Museum”) and back (it’s about an hour by train from Tokyo Station).

Tours are offered from Tuesday to Friday (no weekends, bummer) and can be reserved up to 28 days in advance. One potentially tricky point is that you’ll need to be able to speak a decent level of Japanese, or bring along someone who can, or they won’t let you take part.

In the first half of the tour, you’ll learn the why and how of the massive drain. The guides will take you through the history of G-Cans, explain the geographic features of the area, show you a video with overly dramatic music, and then push buttons on a working model of the drainage system—that uses real water! You can pay attention, or stare vacantly at a pot plant/play with the box of toys provided for kids and bored writers. You’ll get an English booklet at the end of the tour that outlines all of the important bits.

The area which the underground discharge system serves is low lying and prone to flooding, so what G-Cans does is funnel overflow from multiple rivers (there are many) including the Naka, Kuramatsu and Ootoshifurutone ones, and redirect it to the Edo River via a 6.3 km (3.9 mi) tunnel that runs 50 m (164 ft) underground. This ultimately helps keep folks in Tokyo safe from flooding too.

Construction on G-Cans began in 1993 (according to the useful English booklet) and was completed in 2009, though the system was already in partial operation from the mid-2000s.

G-Cans requires some pretty serious pumps—the four that are used are powered by gas and are capable of draining the equivalent of a 25 m (82 ft) swimming pool in one second. Be impressed. Unfortunately these aren’t part of the tour, but what you will get to see is the gigantic cistern-like space that acts to hold and reduce the flow of water through the discharge channels before it gets pumped out into the Edo River.

The cavernous “shrine-like” structure is supported by 59 pillars, each of which is 2 m (6.5 ft) wide and weighs 500 tons. You’ll have ten minutes to potter around a small, restricted area where you can take photos and make post-apocalyptic comments as much as you like, but sadly no skating, skidding or diving into water silos is allowed. Just go with the flow.

G-Cans is a 40-minute walk from Minami-Sakurai Station on the Tobu Noda Line (Tobu Urban Park Line). That is quite a trek, so we recommend hopping on the “Haru” bus that leaves from the South Exit of the station. It costs just 100 yen. Get off at the Ryukyukan stop.

There are soft drink vending machines at the Underground Exploration Museum, but nothing in the way of food anywhere nearby, so eat before you go. Wear shoes that you don’t mind getting wet and dirty.

Note that the tour of the underground water tank area is not barrier free.