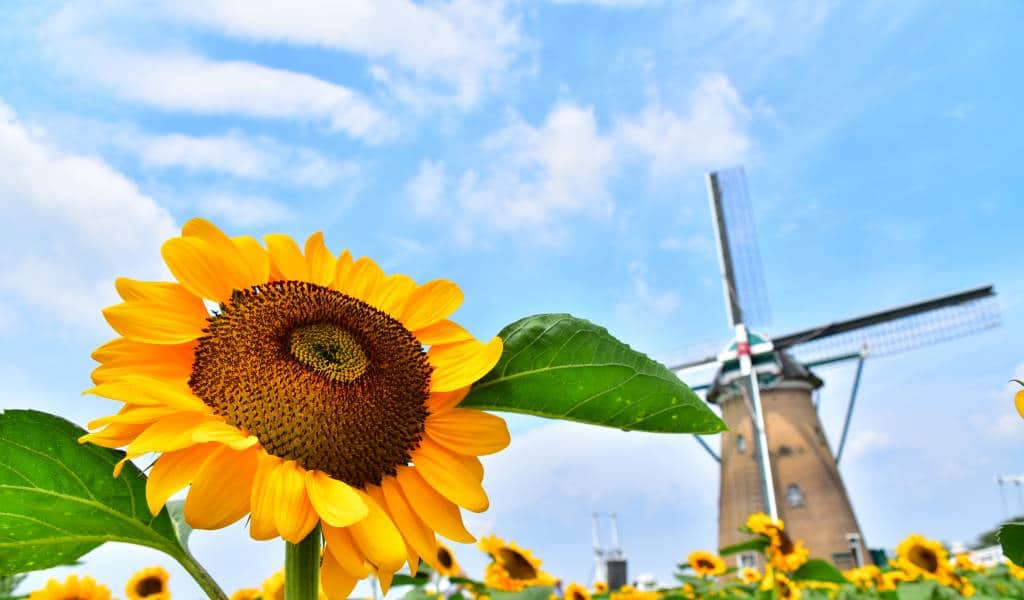 A Dutch Windmill in Kanto? A Little Piece of the Low Lands at Sakura Furusato Square

Windmills. There is no more iconic Dutch structure than these agricultural giants. So what is one of them doing on the other side of the world in Chiba Prefecture, along the Keisei Line from Narita Airport?

While you may have heard of Huis Ten Bosch, the Dutch-themed park near Nagasaki, you may not have heard of Sakura Furusato Square—a little piece of the Netherlands right here in Kanto. The feudal lord of Sakura was one of the first lords to adopt Western teachings, which predominantly came to Japan through Dutch merchants during the Edo period. The city soon became famous for its flower fields used to make medicines for all kinds of ailments.

Sakura Furusato Square was built in 2004 to commemorate this 380-year friendship between the Netherlands and the city of Sakura in Chiba Prefecture. The square’s 28-meter-tall Dutch windmill named De Liefde (or The Love) surrounded by almost 600,000 tulips is a wonderful sight for visitors in spring.

Getting in touch with your Dutchness

For 1,000 yen, you can don a traditional Dutch outfit and take photos with the windmill and tulip fields in the background. If you are lucky you may even spot Miffy (or Nijntje in Dutch) hop through the flower fields on Saturdays and Sundays in spring. The white bunny by children’s book author Dick Bruna is adored by the Dutch and Japanese alike. Can you blame us? Just look at her, she is adorable!

With its 70 varieties of tulips, the square truly comes alive in April. The Sakura Tulip Festa attracts hundreds of people each day to come see the flowers’ vibrant colors under the warm spring sun.

If you miss the tulips, there is always the Windmill Sunflower Garden in July when the square’s many summer flowers are in bloom, or the Cosmos Festival in October for its field flowers.

Top tip: See our Tokyo flower mega guide for which blooms you can see each month.

Sakura Furusato Square is best accessed from Keisei-Sakura Station. From there, it is a 10-minute bus ride away (200 yen) on the Sakura City Community Bus Uchigo Route. Get off at Furusato Square Bus Stop.

However, the most enjoyable way to get to the square is without a doubt by rental bicycle. Simply head over to the Sakura Tourist Information Center in front of the station between 9 am and 4 pm to start your Dutch experience from the very start! Renting a regular bicycle only costs 500 yen for the entire day while an electric assisted bicycle is 1,000 yen.

Since the square officially qualifies as a park, it is open 24/7 throughout the year but the windmill only turns during the day. You can also see the inside of the windmill for free from 9:30 am to 12 pm and 1 pm to 4 pm (except for Mondays).

Open with Maps
Written by: Bjorn
Filed under: Sightseeing
Tags:
Sharing
Questions or comments about this article?
Start a thread on our community forum
Ask our local experts about Tokyo