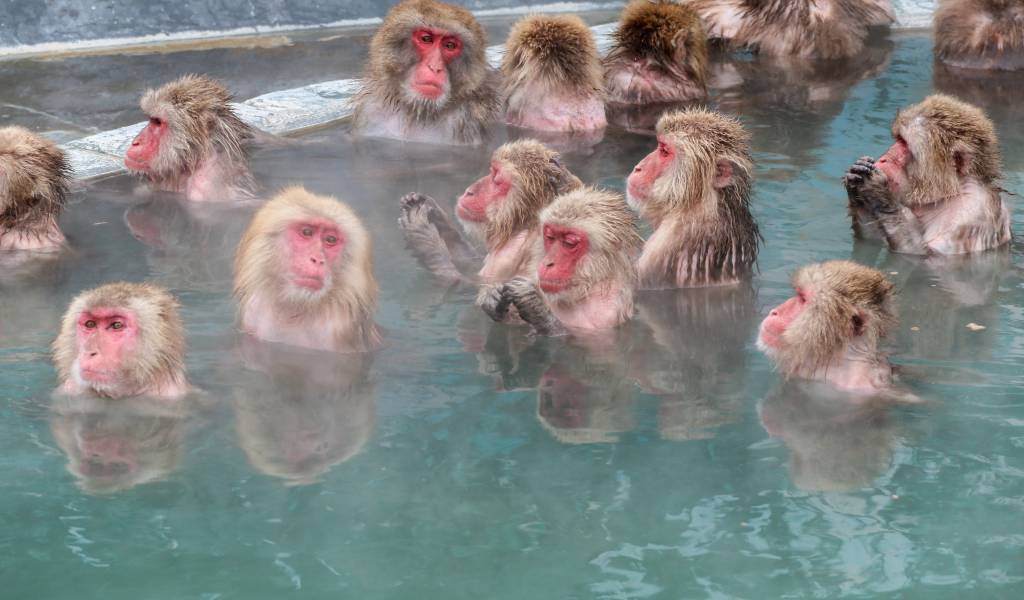 In Search of Snow Monkeys: Tokyo to Jigokudani Monkey Park

“Snow monkeys” (Japanese macaques) have been patronizing the hot spring baths at Jigokudani Snow Monkey Park for decades (since 1964, officially). These primates submerged in steaming water has become one of Japan’s most iconic sights. Even in the era of “overtourism”, a visit to the park — tucked away high in the mountains of Nagano prefecture — is a worthy, relatively uncrowded endeavor, and one that should be on your to-do list. Here’s an overview of how to make your way from Tokyo to Jigokudani, and what to expect when you get there.

Tip: Getting to Jigokudani can be long and difficult because of its remote location. Save time and take a bus tour from Nagano.

Visiting Jigokudani Snow Monkey Park: Where and when?

Jigokudani Snow Monkey Park is in Yamanouchi in the Shimotakai district of Nagano, falling within the vast Shiga Kogen National Park (a prime place for hiking, as well as skiing and snowboarding). The word “Jigokudani” means “Hell Valley” — and is a name given to this and several other volcanic areas of Japan because of the steam and boiling water that escapes from the harsh terrain.

It takes a miniumum of about 3.5 hours to get there from Tokyo, depending on how you go plus transfer time or traffic/conditions.

When should I visit?

The Yamanouchi region receives heavy snowfall in winter (it’s generally white from December through March), with January and February said to be the best time of year to visit the monkey park. It’s definitely the most scenic, with snow-capped trees backgrounding groups of bathing Japanese macaques. However, you can actually visit in any month — park employees feed the monkeys year-round, meaning that they can be found near the man-made rock bath (the center of attention) fairly reliably even in summer.

That said, the monkeys you’ll see are wild animals and they keep their own schedules. There are no fences or cages, and they do whatever they like, really. That’s part of the beauty of the whole park, and something that sets it apart from many of Japan’s other animal experiences.

The monkey park is open daily from 8:30 a.m. to 5 p.m. in the warmer months and 9 a.m. to 4 p.m. between November and March. Check out the live camera to try and gauge what time of day the furry featured guests are most likely to scrub up. Allow yourself an hour or two to explore the park — that’s about enough time to see all there is to see.

The park entrance fee is ¥800 for adults and half that for kids.

Getting from Tokyo to Jigokudani

The trip from Tokyo to Jigokudani can be done as a day trip (if you leave early enough) or as an overnight trip.

There are two main methods of getting from Tokyo to Jigokudani: One, take a train to Nagano and then a bus to the snow monkey park, or two, drive yourself directly.

Many families or groups opt for the car option. The journey should take between 3.5 to 4 hours and cost roughly ¥5,500 in tolls. There are two parking lots. One is free (Kanbayashi Onsen Parking) with a 30-minute walk to Jigokudani; the other costs ¥500 (Jigokudani Parking) with a shorter, 15-minute walk to the bathing area. The latter is reached via a narrow road, closed in winter, and is not suitable for big cars.

1. Getting to Nagano from Tokyo

First, you’ll need to get to Nagano. This is the priciest part of the trip from Tokyo to Jigokudani; taking anything other than a bullet train isn’t recommended because of how time-consuming it can be, so budget for a return trip on the Shinkansen.

Normal one-way fares from Tokyo to Nagano on the Hokuriku Shinkansen are about ¥8,400, but you can make the outing a lot more affordable by taking advantage of a JR Pass or JR East Nagano-Niigata Area Pass. The latter can be used by both foreign tourists and residents alike.

Pro tip: Taking a bus tour might also work out to be more budget-friendly option due to the remoteness of the area (see below).

2. Getting to Jigokudani Snow Monkey Park from Nagano

Once you’ve arrived at Nagano Station, you can take an express bus from the station’s east side directly to Jigokudani Snow Monkey Park. It takes under an hour. The snag is that there are only a handful of buses every day, and they cost close to ¥1,500. You can find a guide to these buses on this timetable (please note that the frequency with which buses run varies according to season). You still have to walk 30-minutes to the park from the bus stop.

A much better bet is to hop onto the Nagano Dentetsu (Nagaden) train line from Nagano Station and ride it to Yudanaka Station. This takes 40–70 minutes, depending on whether you take local or express trains, and costs ¥1,290). You can then take a bus from there. Board one heading in the direction of Kanbayashi Onsen (your stop) or Snow Monkey Park (just as close, your disembarkation point will depend on which bus you take).

The ride takes about 10 minutes and costs about ¥310. There are a couple of buses most hours of the day. Have a look here (timetable is on the right) for an idea of bus departure times. If you’re planning to stay in Shibu Onsen, note that it’s one of the bus stops along the way.

Note: Busses or trains to the park from Nagano Station are not covered by the JR Pass.

From the bus stop, it’s a 30–40 minute walk through the forest to the monkey bath. Wear sturdy shoes that you don’t mind getting wet (mud and slush abound, especially in winter) and make sure they have good grip to avoid slipping and sliding.

Not-so-Cheapo tip: Unfortunately, no buses can get you within a 15-minute walk of the monkey park, but a taxi can. You can take a taxi from Yudanaka Station to the Jigokudani Parking Lot — bear in mind that this could be quite costly though, and that the road may be closed in winter.

A money-saving tip is to use the Snow Monkey 2-Day Pass for your meanderings to and from Jigokudani. The pass, which costs ¥3,600 for adults (half that for kids) and can be purchased at Nagano Station (the Dentetsu Line side), gives you two day’s unlimited use of the Nagaden buses and trains, and includes a one-day entrance fee to the monkey park. You’re looking at a minimum of ¥500 saved — so it’s well worth picking up a pass when you arrive in Nagano.

Cheapos wanting to go the easy, pre-packaged route can book a spot on this Snow Monkeys & Shiga Kogen Roman Museum Trip. This is a round-trip tour from Tokyo to Nagano and is for those who want to go to Shiga Kogen and monkey it up. It includes round-trip transfers and a buffet lunch. Price starts at ¥15,500 per person.

Alternatively, you can make your own way to Nagano and combine the sights of the area in a fantastic day trip. This one-day tour starts at under ¥17,000 and includes Zenkō-ji Temple, the monkey park, sake tasting, lunch, and all transport.

Note: Some tours only run during the winter months.

If you want to spend the night in the area, you’ve got three main options (four, if you do a quick side-trip from a ski resort like Nozawa Onsen).

The closest accommodation to the snow monkeys is Korakukan Ryokan, a traditional Japanese inn that is in the valley itself. It’s not cheap, but it does offer an up-close-and-personal view of the primates and a rare chance to bathe with them in the facility’s own outdoor hot spring bath. There are indoor and private baths too, if you aren’t so keen on sharing with Curious George and his crew.

Your other options are staying in the nearby towns of Yudanaka or Shibu, where you’ll be able to find cheaper hotels and inns, most of which feature their own hot spring baths, too. Try the intimate and onsen-equipped Yudanaka Yasuragi, or, if you feel like splashing out a little, Yudanaka Tawaraya Ryokan, both in Yudanaka. You can also walk around and visit the numerous public baths in the area — many of the onsen use an honesty-box system for payment.

No monkeying about: Rules and reminders

The monkeys may like bathing, but they’re far from domesticated. Like any wild animals, it’s important that you don’t try to touch or feed them. Leave doggo at home, keep a safe distance, avoid looking in their uncannily human eyes (they’ll take it as a sign of aggression and may come at you), and don’t try and bathe with them (unless you’re doing so at Korakukan Ryokan). Just enjoy the sight of them being the ultimate Cheapos — taking advantage of a 100% free outdoor bath.

Special thanks to fellow Cheapos Selena Hoy and Kaori Nagy for their help with this Tokyo to Jigokudani article. While we do our best to ensure that everything is correct, information is subject to change. Originally published in October 2017. Last updated in September 2022.