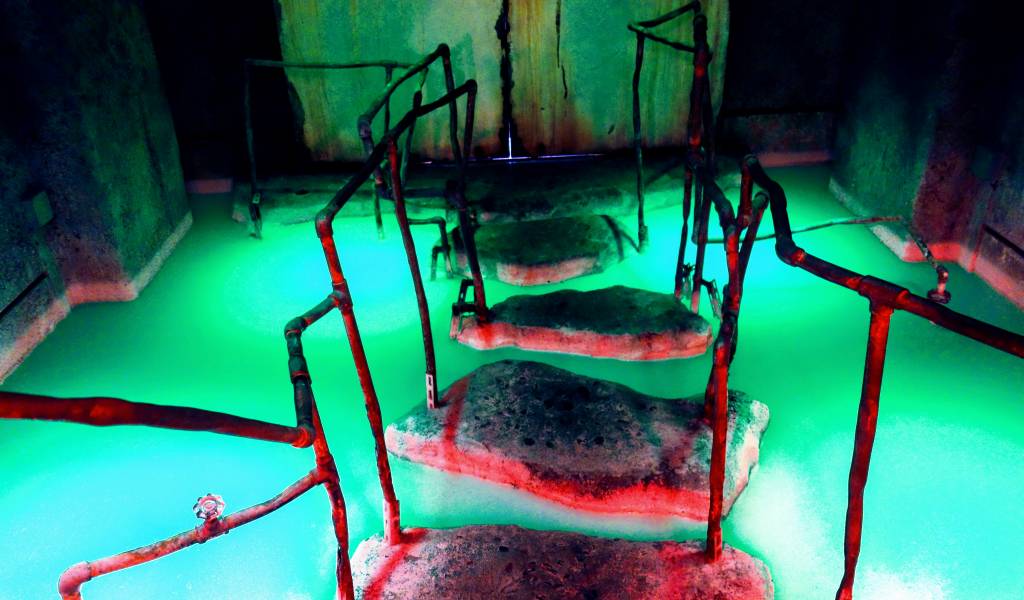 Anata no Warehouse: The Dystopian Arcade Just for Adults

Step off the streets of Kawasaki and into a dystopian amusement arcade: Anata no Warehouse. It’s part sci-fi, part dedicated re-make of the original Walled City of Kowloon.

Five minutes from Kawasaki Station, this unusual arcade stands nonchalantly between regular tower blocks as if completely unaware of it’s faux-rusty exterior next to their polished cement. Impossible to miss, even the building’s exterior lives up to expectations, with complete commitment to the theme.

Anata no Warehouse, meaning “Your Warehouse”, is fully-functioning arcade with everything from UFO catchers to darts to horse-racing tracks, but that’s not the real attraction. Promisingly, only those over 18 can enter, and although this is probably because of the game machines inside, it adds a sense of intensity to the whole situation. If you enter through giant steel door, prepare for jets of air to make you jump and a haunting entrance which instantly takes you off the streets of Kawasaki and into the cramped streets of Kowloon Walled City.

Originally a Chinese military fort, the Walled City of Kowloon was a densely populated haven of crime and prostitution as well as a thriving community, with little police involvement and over 33,000 residents. At only 6.4 acres, the ramshackle houses could be traversed by ladders across balconies and rooftops, with planes flying close over head and its own network of narrow alleys and streets. Having grown suddenly after WW2, and with fires, police crackdowns and a troubled past, the city was eventually demolished with the eviction process beginning in 1987. Famed for its neon lights, shady businesses and maze-like alleys, it’s no wonder the city is the source of inspiration for many dystopian films including Ghost in the Shell and Blade Runner.

Having studied old photographs and accounts of the city, the designers spared no effort in carefully recreating the atmosphere, with trash imported specifically and signs all hand-painted, with rust, grime and graffiti carefully added. The attention to detail and commitment means it really does feel like stepping into an abandoned city, with sound effects playing in the distance and countless elements to appreciate.

On the ground floor you’ll find yourself in a darkened alley with grimy windows allowing you to peer into prostitute dens and beyond. The elevators are adorned with neon and pasted signs and posters decorate the walls. Although you can see the sci-fi exit straight away, we suggest you stick to the Kowloon vibes first, taking the elevator or escalator upstairs.

The main recreation of Kowloon will hit you as you arrive upstairs by escalator, with a two-storey facade painstakingly recreated with birdcages, balconies, signs and washing lines strung across. The meat vendor stall is placed just beyond the retro arcade games and to the right of the racing karts, giving it a very surreal atmosphere. This floor is filled with your traditional arcade games, from UFO catchers offering giant Pocky and even ice cream, to shooter games, air hockey and the intense dance machines.

This is a great floor if you aren’t an avid gamer as it’s easy to enjoy a few games, with nothing being more than a couple of hundred yen. Since the place is so big, you won’t have a hard time finding free machines, but the more popular ones may have a queue. While some machines are gaudily bright and a fantastic contrast to the sketchy surroundings, some have been aged and modified to look original, as well as working vending machines complete with layers of grime.

Even the men’s toilets fit the theme here, with enough grime to make you reconsider… The women’s bathroom, however, is a perfumed, brightly lit haven playing Ed Sheeran quietly in the background, so you know, they decided girls will only take a theme so far. (Blurry photo taken hurriedly on my behalf, of course—I’m not a total creeper).

Once you’ve finished staring in awe at the incredible city-scene and have played a few games (since you’re here, it would be rude not to), you can head upstairs to see the higher view. With a different angle you can really appreciate the detail and feel of the theme, looking down to the street below and into the balconies and homes above.

This floor is a more serious gambling-style set of medal games, with counters used instead of money on the machines. There are also horse-racing tracks and soccer-based betting areas, which all look pretty intense. The coin-pusher machines may bring back flashes of childhood on a rainy day at the beach, but are way more intense, with incredibly distracting mechanics on display. They are pretty addictive to try and actually really simple once you get past the flashing displays, but you can only buy counters for 1,000 yen, giving you 4oo—so don’t get too addicted.

The final floor is not Kowloon themed, unfortunately, it inexplicably has a Greek fountain scene to greet you from the escalator. This floor is the more normal one, filled with pool tables, ping pong and darts as well as a few simple games and UFO catchers. Definitely the least fun floor or the building, but good if you want to relax with a game of pool.

Once you’ve gone back down and played any final games, and spent a lot more time staring at the city walls, you can exit via the sci-fi steampunk tunnel. The glowing red path leads to a steaming blue pool which can only be crossed by stepping stones with rusty railings either side. The view is haunting, and even better when seen from the other side.

This does, however, lead out into a car park rather than a futuristic dystopian nightmare, but the fun has to end somewhere. The automatic yin-yang circular door is great, with a real sense of adventure if you enter this way instead of the front entrance. Possibly the best part is seeing the actual gamers arriving with Family Mart snacks completely ambivalent to the ethereal pool as they head into the arcade, making the unusual seem pretty everyday.

Getting to Anata no Warehouse

The arcade is about a 5-to-10-minute walk from Kawasaki Station. It takes half an hour from Shinjuku and is only 9 minutes from Shinagawa.

Although the real Kowloon Walled City has been consigned to history, for a salty taste of what remains, check out our very own cheapo guide to Hong Kong.