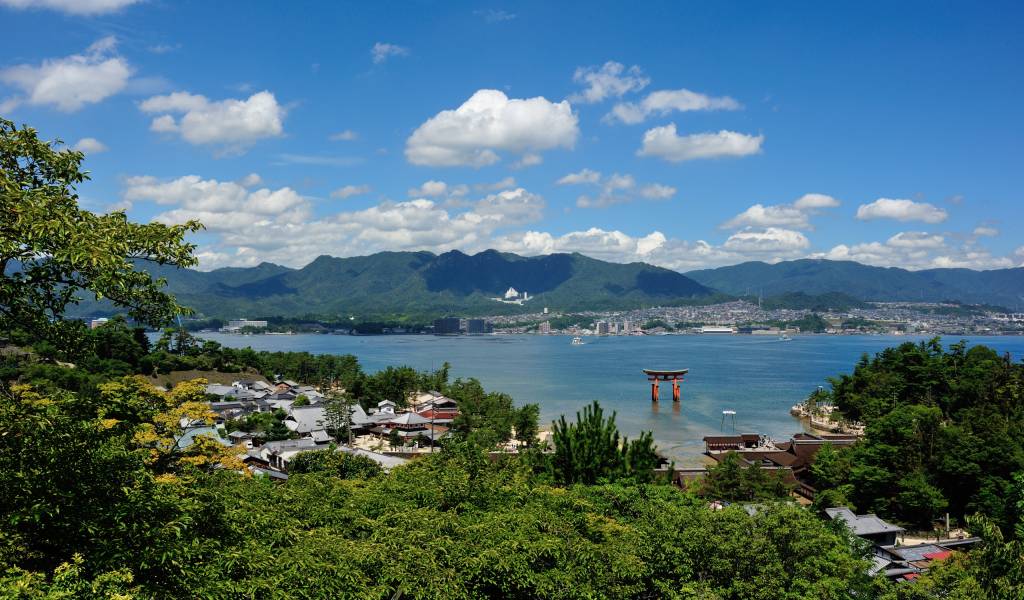 Most famous for the stunning island of Miyajima—the rest of the Hatsukaichi area often gets overlooked. There are mountain pilgrimages, festivals and more—making it a great place to stay if you want to visit Miyajima and Hiroshima.

Originally a small town providing samurai lodgings along the old highways, Hatsukaichi is home to the kendama (a traditional Japanese toy) and famed for its oysters and maple leaves. Following two mergers in 2003 and 2005 to include nearby towns like Saiki, Miyajima and Ono, it now stretches from deep inland to the sea, covering over 480km². It was named after the local monthly market, with ichi meaning market, and Hatsuka meaning 20th day. The area has a variety of attractions in each season, with plenty of mountain trails, ski slopes and onsen to enjoy, as well as stunning forests.

If you’re keen for an adventure and love hiking, then the Gokurakuji Temple hike is for you. The trail starts 2km from Hatsukaichi Station—and if you start in decent time, you can see incredible views of Miyajima, a beautiful shrine with an ancient history, lily-filled lakes and finish at an onsen! Finding the trail can be a little difficult, and you can choose whether or not to take a taxi from the station or walk there yourself. This is a handy picture-by-picture guide to the hike trail, which is especially lovely in autumn. The temple is also home to a thousand-year-old cedar tree, planted (legend has it) by Kobo Dashi himself. It is known as the cedar of long life and the temple is part of the original Shikoku Pilgrimage. The Arcadia Onsen has a few free shuttle buses to and from the station, so you can use that to get home if you keep an eye on the times!

Soak in the onsen resorts

With plenty of natural spring water, Hatsukaichi has a number of resorts to visit, and they don’t all require a mountain trek to reach them! The Yunoyama Onsen Spring was discovered over 1000 years ago and was used by the territorial Lord Asano. It is both a Significant Intangible Folk Cultural Asset of the Country (since 1974) and the the National Recreational Hot Spring Resort of the Ministry of Environment (since 1972). Kurhaus Yunoyama is the resort name, and it takes 1 hour by bus from Hatsukaichi. They have mixed bathing facilities, with a variety of baths.

One of the most famous spots in Japan, this is probably why you’re here in the first place. As part of the Hatsukaichi city area, the famed island is a very popular spot and has plenty to see. The main attraction of the stunning floating torii gate of Itsukushima Shrine are separated during high tide by the Seto Inland Sea, and you can walk between the two when it’s lower. The shrine buildings are connected by boardwalks and sit on pillars above the sea, including a prayer hall, Noh theater and main hall. It is worth checking out tide timetables so you can see the gate both at high and low tide, and ideally in the evening, as the illuminations are beautiful.

There is plenty to see near by, including the Momijidani Park and ropeway, Daisho-in Temple and Tahoto Pagoda as well as hiking options, so a morning low-tide walk to the gate, returning in the evening to see the high-tide illumination may be a good plan. You can catch the JR Sanyo Line to Miyajimaguchi  (8 minutes, 200 yen) and then catch a ferry (either JR or private, both 180 yen) to the island.

Although you may have come from Hiroshima, during busy months it can be nicer to stay outside the city and travel in for the day, especially if you’re a bit more of a nature fan. There is plenty to choose from including the Peace Park and Museum, along with plenty of festivals and parades throughout the year! Check out our full guide here.

Although Hiroshima is close by, there is another brilliant city only 30 minutes from Hatsukaichi: Iwakuni. With a famous curved bridge, stunning castle, snakes and special sushi—it is a brilliant unknown gem in the area. Visit during spring for the cherry blossom or autumn for the maples. Plus there are cormorant fishing festivals in April and you can even try sweet fish ice cream. We have a full review of all the best spots here!

Where to stay from Hatsukaichi

There are plenty of amazing resort hotels and ryokan in the area, but there are some hostels too. The Omotenashi Hostel on Miyajima offers dorm rooms from ¥2,500 including female only as well as traditional Japanese private rooms for up to 8 people. They offer bike rental and trips for longer stays and have great staff. The Simple Stay Miyajima Hostel lives up to its name: it’s simple, but has a great location. The nearby Hostel and Cafe Backpackers Miyajima is dorm rooms from ¥2,900 with bike rental, wifi and views over to Miyajima.

Fastest: At an eye-watering ¥19,000 to get from Tokyo to Hatsukaichi on the bullet train (hopefully you have the JR rail pass with you). The journey takes almost four and a half hours, and takes you straight to Hiroshima, where you change to the local JR line for 20 minutes. Alternatively, you can fly from Narita to Osaka on Peach airlines for fares as low as ¥3,490, which only takes an hour and a half, but once you add train fares and additional fees on either side, you only save around ¥1,000.

Cheapest: If you’re prepared to settle yourself in for a long ride, there are overnight buses that leave Tokyo around 8:30pm and arrive into Hiroshima at 9am—leaving you with a simple 20-minute train ride to Hatsukaichi. Bus prices start at around ¥7,500 with Willer Express or you can pick a fancier seat for ¥12,000 (might be worth it considering the journey time—you get wide reclining seats, wifi and plug sockets).

Fastest: At just over two hours, you can catch the Sakura or Nozomi Shinkansen to Hiroshima and then the local line, costing ¥10,550 (or knock ¥500 off if you select an unreserved seat).

Cheapest: You can save around ¥4,000 by taking only local trains, but from Osaka station this requires 4 transfers and takes around 6 hours, so it may not really be worth it. This is the same from Kyoto, plus an additional half hour, as you are simply joining the same initial train at an earlier point. The highway bus option takes around 7 hours from Kyoto and 6 from Osaka, costing between ¥3,570 and ¥4,200. There are both day and over-night services available, so it can be good in place of a hostel—if you’re good at bus naps that is.

Looking for more getaway ideas? See our guide to Takayama in Gifu Prefecture.