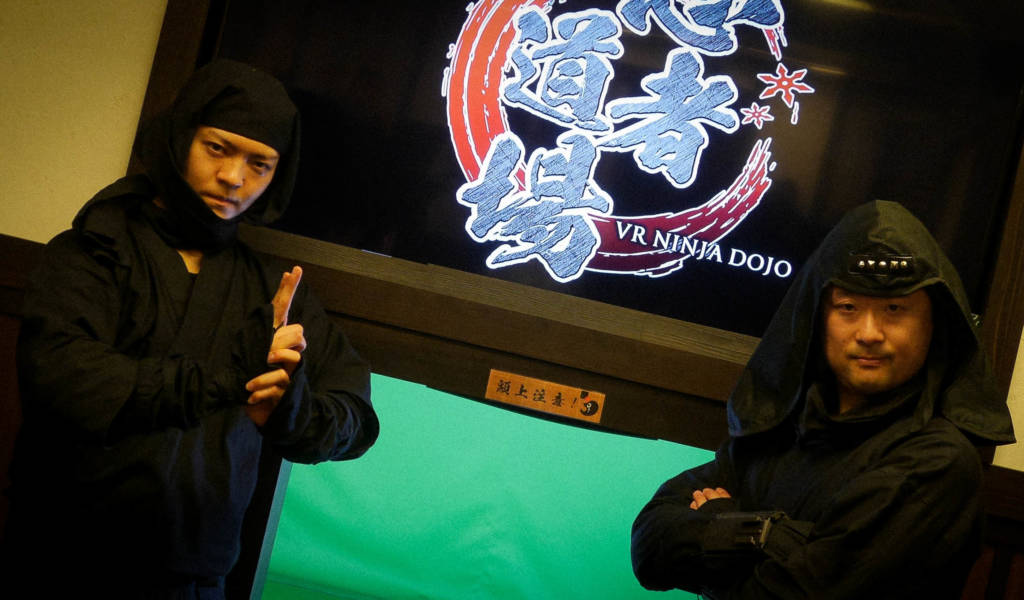 With Japan’s population in steady decline, ninja masters are looking to foreign shores for new students. Are you up to the challenge?

Ancient evils are stirring all across the land. As ever, ninja are using every trick in the book to
prepare themselves for the battles that lie ahead. This particular “ninja academy” in Kanda
hones aspiring warriors into elite demon-hunters.”

VR Ninja Dojo is a unique interactive experience. Using live instructors, full costumes, authentic decorations and virtual reality, it’s a full-scale production of the kind you won’t find anywhere else in the city.

The dojo blends immersive theater and VR, with performances and interactive “training” sessions in the ninja arts. Everything is presented in pretty fluent English, and the resident shinobi are keen to make sure everyone gets the full experience. I won’t reveal all the surprises (I swore a blood-oath of secrecy), but suffice to say you won’t just be walking in, putting on a VR headset and strolling back out. That said, it’s a family-friendly day out—so if they’re in good health, kids (or your grandma) should have no problem joining in the fun.

Tools of the trade

A ninja is only as good as their tools. Fortunately, there’s a full arsenal of gear at your disposal.

Your classic ninja outfit. Historical accuracy aside, it’s hard to find your assassin’s spirit unless you’re dressed head to toe in black. Everything goes over your regular clothes—so don’t layer up too much or you’ll regret it. With the provided jika-tabi (split-toe shoes) for silent running, you’re all set.

This (probably made-up) shortsword is the bread and butter of ninja warfare. For obvious reasons you won’t be wielding a full sword, just the hilt. It’s got some heft to it though, so it feels good to swing around, and the sensors do a nice job of rendering it realistically in the VR world.

No ninja experience would be complete without throwing stars. Despite a short demonstration and training session with the real thing, you won’t be throwing anything physical in your VR room. Aiming is tricky, but they’re a one-shot kill for most of the rank-and-file demons you’ll be facing.

Naruto fans may recognize the bunshin no jutsu (clone technique) and katon no jutsu (fire release technique), which allow you to create a team of doppelgangers or breathe fire on your foes.

Surprisingly for such a secretive bunch, the staff were very keen to encourage participants to take photos, with a wide range of ninja-related props close at hand.

After a short training montage, you’ll be deployed on a solo mission to take down hordes of undead ninja, samurai, and a final boss. The set-up is pretty straightforward—enemies will either run straight at you or sneak up from the sidelines. Survive the onslaught and you’ll earn your rightful place on the leaderboard, painted on a few wooden posts prominently displayed in the dojo. Win or lose, you’ll be given a scroll with a commemorative photo, your score, and a QR code with a video of your run. Just so you can see how dumb you actually looked swinging that sword around.

You’re best off booking online (all in English), as rates are slightly cheaper if you reserve your spot in advance. At ¥6,500 for roughly an hour’s fun, it’s far from the cheapest VR experience in Tokyo, but it might just be the most well thought out.

Ultimately, what makes this attraction so interesting is the love of the subject and meticulous attention to detail—from the costumes and performances to the set decoration. If you’ve ever dreamed of dropping out of the rat race to pursue a covert life of secret scrolls, hidden doors and demon-slaying, VR Ninja Dojo Kanda is well worth a visit.

In and around Kanda

There’s plenty to see and do here in what was once the downtown center of Edo—Tokyo’s predecessor and the former capital of Japan. The area is also renowned for used books, especially in nearby Jimbocho—a mecca for cheapo book lovers. Who knows? You might even find a ninja training manual or two hiding among the vampire romance novels.