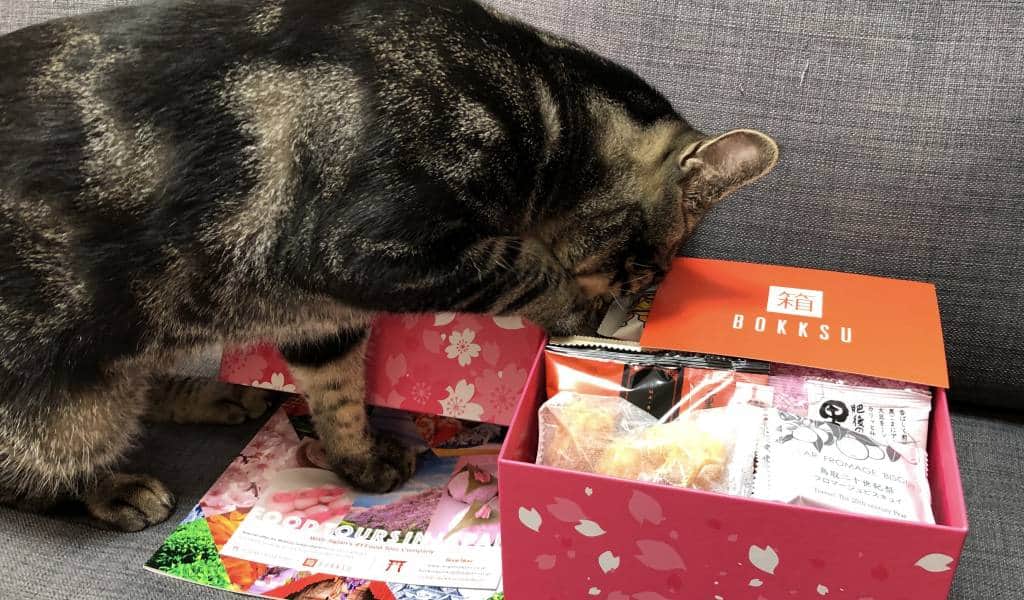 Love Japan but don’t live here? You can get a (literal) taste of the country through a subscription Japanese snack box.

Every month, you can have a new box of treats both savory and sweet shipped to you from Japan, for between 40 and 50 USD a pop. There are a few different names in the Japanese snack box game, but here we’ll be giving you the lowdown on household favorite, Bokksu.

Cheapo comparison: Read our review of Tokyo Treat snack boxes, and also check out Peko Peko Box—which is more of a gift box than a food box.

Stuck inside during COVID-19, we decided to do what the internet recommends, i.e. read a few books, binge-watch stuff on Netflix and snack like summer isn’t coming back.

Bokksu hooked us up with one of their boxes, and, since they ship worldwide for free, we thought you might like to see what was in it, and maybe try one for yourself. Gratuitous cat pictures included.*

What is in a Bokksu Japanese snack box?

It depends what time of year it is, but quantity-wise you’re looking at the following:

Each box is a mix of savory and sweet treats, as well as tea, chosen (we wanted to say curated, but it felt too posh) to introduce the recipients to local specialties from different prefectures in Japan.

Here’s what we got in our Japanese snack box:

Like every first box from Bokksu, it was themed around the four seasons of Japan. Each season here is known not only for its distinct weather and scenery, but for the foods that are available. The snack box introduces you to some of those seasonal flavors, such as Japanese citrus (summer), plum (spring) and strawberry (winter/spring).

Once you’ve had your first box, each new box will have its own theme—this might be hanami one month, and the tastes of Japanese festivals the next. It’s supposed to be a surprise every time.

The box comes with a handy little English pamphlet that provides information on each snack, including the ingredients (and whether the item is vegetarian or not), the origin, tasting notes, and a bit of history.

What we liked about Bokksu is the fact that most of their snacks aren’t the sort of thing you could grab off a shelf at any old convenience store in Tokyo; you get artisanal bites from family businesses, some of which go back over a hundred years, as well as more modern nibbles.

My personal favorites from the box were the Seaweed Tempura, which contained sudachi (a citrus fruit grown only near Hiroshima) and paired nicely with Asahi Super Dry beer, and the snappily named 20th Century Pear Fromage biscuit from Tottori.

With free shipping worldwide, the main consideration is whether you want more, and for longer, or less, and for a shorter period.

Note: Due to COVID-19-related air mail disruptions, shipping may be delayed or temporarily unavailable in certain regions. Detailed information can be found on the Bokksu website.

Is Bokksu worth it?

Yes, we reckon Bokksu is worth it. All of their Japanese snack box subscription options make great gifts, as well as fun and affordable ways to experience Japan when you’re not able to physically be there. A box can be fun even if you live in Japan but are unable to travel around.

The snacks are good quality and tasty, and each one offers a way to learn more about the country and its culinary history.

We were not paid by Bokksu to write this article. However, we did receive a sample box to review. Additionally, this article contains affiliate links. If you order through them, we will receive some monies to help keep The Laser Cats fed and happy. Post first published in April, 2020. Last updated in November, 2020.