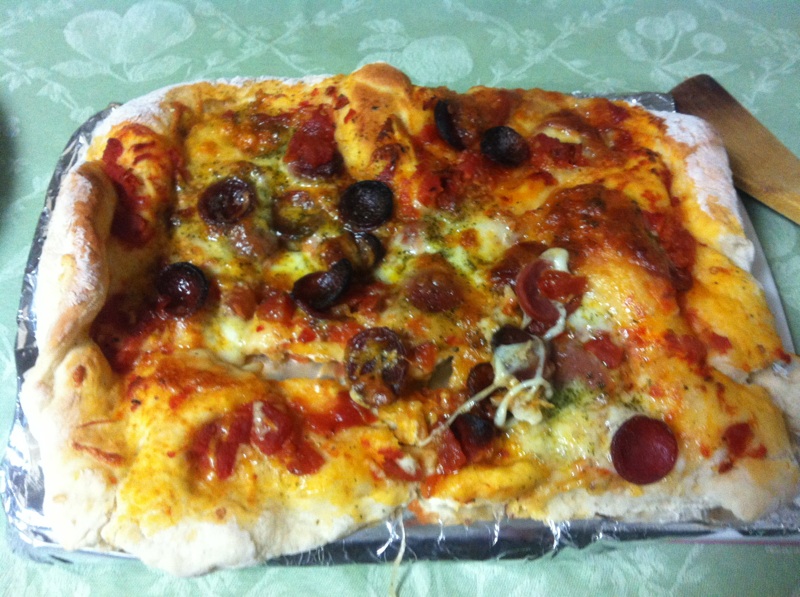 December 13th, 2013 | Chris Kirkland
Sharing
Chuffed to have our good friend Mike Oakland from TokyoDesu share with us one of his delicious “Easy Recipes for Homesick Gaijin” posts today

Here at TokyoDesu, we’re not exactly culinary wiz-kids, but we know our way around a kitchen (ladies…) and we certainly know what gaijin like to eat.

That’s why we’re introducing the “Easy Recipes for Homesick Gaijin” series, starting with a lightning fast and mind-bogglingly easy recipe for one of the most elusive dishes in Japan: a decent pizza.

Restaurant pizza comes in two varieties in Japan: terrible and insanely expensive (TokyoDesu pick Cona notwithstanding), but this easy recipe will make a seriously good large pizza in 30 minutes from the comfort of your own lonely, poorly lit 1-bedroom apartment.

To start, you’ll need to make dough. Here’s how.

Here’s what the yeast and bread flour should look like at your nearest grocer.

First, throw the warm water into a mixing bowl, then add the sugar and yeast. Stir to dissolve and let sit five minutes. It should become slightly creamy. If it doesn’t, you probably killed the yeast and you need to turn yourself in to the authorities.

Add olive oil, salt and bread flour and stir with whatever utensil you have around (use toilet scrub brush only as a last resort). Once it’s clumped up a bit you can dig right in with your hands and man-handle it like one of Tomomi Kasai’s boobs until it’s soft and springy.

Protip: if an alarming amount of dough is sticking to your fingers, it isn’t dry enough and you need to add more flour. Just throw more in a handful at a time until the dough stops sticking.

Let sit ten minutes, then throw that little bastard down onto a lightly floured surface as hard as you can and PUNCH THE LIVING DAYLIGHTS OUT OF IT*. English teachers may find this part most enjoyable if imagining the dough is your least motivated student.

Now spread out into a size your oven will accept, add pizza sauce, mozzarella and/or whatever other cheese you have lying around and other toppings.

Put it in the oven and cook for around 20 minutes or until the edges are golden brown.

If you don’t have an oven, you can make two or three thin crust pizzas by (obviously) spreading the dough out really thin, then throwing it into a frying pan, adding toppings and covering over heat until crispy. You could also just try to eat the thing raw, but TokyoDesu does not endorse this option.

Best of all, this recipe is ultra cheap. Here’s the cost breakdown:

One pack each of bread flour, yeast and sauce will make about four large pizza crusts. We’re assuming you’ve already got sugar, oil, salt and other basic cooking ingredients around – because, come on, what are you, homeless? – so the grand total for a single large pizza comes to about 636 yen, or around ¼ what you’d pay for a medium delivery pie. You can push the cost down even further by subbing so-called “natural” cheese, available at any grocery store for around a buck or so.

This dish is also a great way to impress that special someone, because there’s no reason you shouldn’t claim this is a generations old family recipe your grandmother used to make before she passed away in a horrific crocheting accident, bless her soul.

*Strictly speaking, this step isn’t necessary, but we know you’re going to do it anyway.