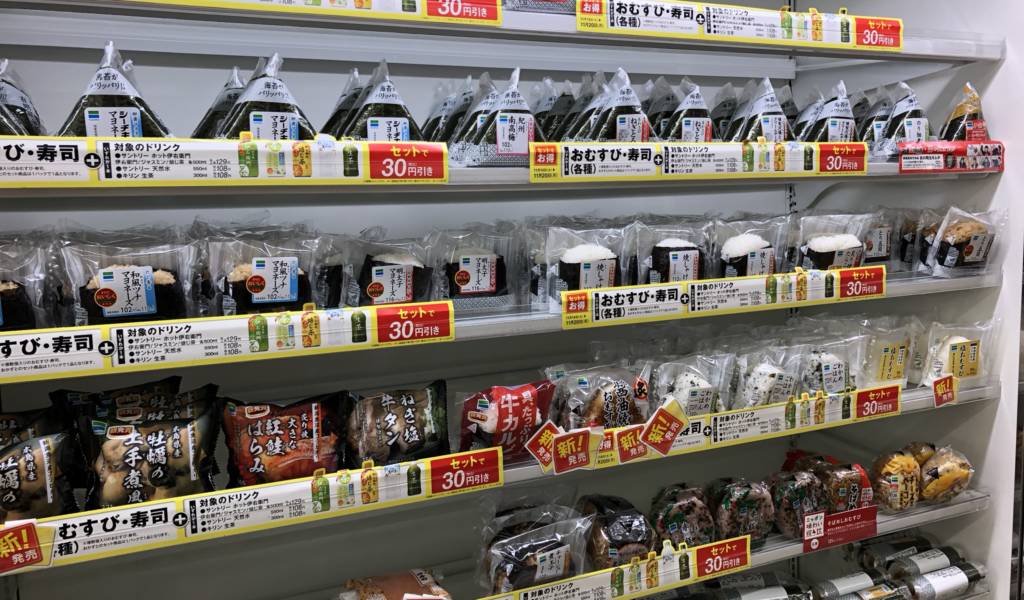 Japan is stuffed, from shore to shore, with deliciousness. Sure, some of the traditional menu items may give the tourist occasional pause—natto, anyone? (tip: eat it, then thank me)—but 99% of the time you’ll seriously want seconds. Another thing Japan is stuffed with, though, is hectic schedules; from time to time you’ll be short of time to sit down and eat. Happily, yet another thing Japan has in excess is delicious konbini (convenience store) snack food. And prince among these is the humble onigiri (rice ball), toothsome and cheap.

There’s debate about how and when onigiri (a.k.a omusubi) got started. Fossilized clumps of cooked rice have been found in ancient tombs, suggesting an early start to the national fondness for the triangular hand-held snacks. Equally lively is the discussion around why they’re called onigiri, ranging from the mythological (they’re named after gods) to the practical (the word comes from the verb nigiru, “to clasp”, because of the way they’re shaped by hand). What is certain is that they go way, way back. The original filling seems to have been umeboshi, pickled Japanese plums, which had antibacterial properties that kept the rice fresh while their bold flavor jazzed up the rice.

Onigiri are usually triangular balls of cooked white rice, with a filling in the middle. Because taste is more important than consistency, some use brown or flavored rice, and they’re also found in rounds, cylinders and occasionally in special shapes like stars or hearts. (Triangles are popular because they’re really space-efficient and hold together well). Generally, they’re no bigger than the palm of your hand.  They can be wrapped in nori (seaweed), or not; some come wrapped in thin omelette, dusted with furikake (a Japanese seasoning) , or rolled in sesame seeds.

The nori thing seems to be quite recent: before wide-scale aquaculture of seaweed, the rice was wrapped in bamboo sheaths. The 1-2-3 unwrapping system for the packaging was introduced in the late-20th century. It was not, incidentally, devised to make you think you’ve broken your lunch; it keeps the nori off the rice until you’re ready to eat, because nobody likes clammy seaweed.

Not all of them have fillings: for example, the osekihan, a fetching pink item of rice steamed with adzuki beans. Sometimes, yaki onigiri (grilled rice ball) are basted with soy sauce and grilled. There are also seasonal and regional variations—in Okinawa, onigiri often contain Spam, and in past years there have been autumnal limited-edition chestnut variations. For those among us who like it simple, plain salted rice varieties are also on the shelves.

The only limit to what can go into onigiri seems to be imagination, although they are almost always savory rather than sweet. Many websites publish annual surveys of the most popular fillings, with salmon (shake), tuna (tsuna) and roe (mentaiko or tarako) taking top spots. Japan takes onigiri  seriously—you find them at konbini, sure, but homemade ones are common in lunchboxes and on picnics, and there are also whole chains of shops, like Gonbei, dedicated to fresh, on-demand onigiri.

But what are they like? And where, in the dozens of options available, to start? We took a look at ten convenience-store varieties.

This is your basic konbini onigiri. The mayonnaise, need we point out, is the slightly sweet Japanese kind. The tuna, to my unreconstructed Western mouth, was fine-textured instead of in the regulation chunks, but still had a distinct fishiness. How do they do that?

Pro tip: learn the katakana for mayonezu: マヨネーズ. Interestingly, in Japanese “ツナ” is only used for canned tuna; the usual word is maguro: 鮪 or まぐろ.

We all remember our first…onigiri. I had this one within five minutes of getting to our Narita hotel and if there was anything that told me I was no longer in Kansas, Toto, it was getting an unexpected mouthful of something I could not identify at all. “Mmmfmfm?” I said to my Japanophone traveling companion. “Uh, that’s kelp,” she said, and turned back to the check-in clerk. Kelp?

Shrimp are never a bad idea, and paired with Japanese mayo, they make a satisfying—if weirdly smooth—filling for this “healthy” onigiri. Lawson Natural stores are allegedly aimed at female shoppers, and tend to offer snacks with fewer processed ingredients and more organic ones.  Lawson Naturals are a tad more expensive because of this, making this ¥130 onigiri a bit more of an investment than its Lawson or Lawson Station cousins.

Also, note the English on the packaging—and the katakana spelling of ebi, which is usually 海老 or えび.

This was where my inability to read kanji got me into deep water. I was not mentally prepared. But what a pleasant surprise it is: a meaty and intensely savory mouthful with a subtle salty smack. This is the premium version of the usual kelp tsukudani, a dish of seaweed simmered in soy and mirin. Hidaka kelp hails from the southeastern corner of Hokkaido, where the chilly Oyashio Current brings minerals down from the north, giving the area’s kelp its rich flavor.

At the risk of causing an international incident of some kind, I hereby state that I do not love umeboshi. I am all for umeshu, and Cafe Stay Happy has kickin’ homemade ume-ginger ale, but something about the original pickled fruit doesn’t please me as it might. It may be something you have to be raised with to appreciate. But as this is the original onigiri filling, I tried one, and admit that if given another one, I would willingly eat it. I just might not buy it for myself.

That said, it has a sharp and tangy/salty tart flavor that some palates would love to death, and it does, definitely, brighten up your senses.

Full disclosure: this wasn’t my onigiri and I only cadged one bite, but this ¥198 beaut is worth the extra yen. The fish is flaky and meaty, and the rice is a little more moist than is the norm with other onigiri. It was also slightly bigger than usual.

Another example of the onigiri-maker’s art of somehow making a teaspoonful of filling seem like a plateful of flavor. I couldn’t pick out any individual onions or bits of tuna, but the essence of tuna-y spring-onion flavor was all over this one.

A somewhat more exotic flavor, this was one of my favorites: small globes of roe spiced with red pepper and bound with a dollop of mayonnaise in a casing of umami nori and succulent rice. Not bad for ¥120.

You’ll notice here that while mayonezu is in katakana, the spicy roe, mentaiko (明太子), is written using kanji.

This is one for the purists: no filling and no nori, just lightly-salted rice studded with adzuki beans. Perhaps better suited for a light snack than lunch or an oh-God-feed-me-or-I’ll-keel-over moment. Osekihan is traditionally a celebratory food, and adzuki beans are Japan’s second-most beloved bean, so this little package of rice-and-beany goodness has a lot of cultural weight. I’m sorry I ate mine standing on the sidewalk in Ryogoku.

Pickled leaf mustard (takana) and baby sardines (chirimen). What’s not to love? My determination not to accidentally eat what one seafood restaurant translated as “the young of the sardine” went out the window here, but I can’t say I’m sorry. This was great: flavorsome, a little fishy and with a great mouthfeel. New Days convenience stores are usually found at stations, so prepare to make this sort of discovery as soon as you sit down on the train.

Onigiri are Japan’s major contribution to snacking, and let’s be frank: it’s not fair that we can’t get these elsewhere in the world. Budget and time, and a limit on how much rice one person can safely consume in a few days, meant that I didn’t get to the custom onigiri shops, or try every one at every konbini. But I’ll be back. Get stuck into the community forum and let us know your tips for getting hold of great onigiri.

Written by: Kylie Van Zyl
Filed under: Eating & Drinking
Tags:
Sharing
Questions or comments about this article?
Start a thread on our community forum
Ask our local experts about Tokyo