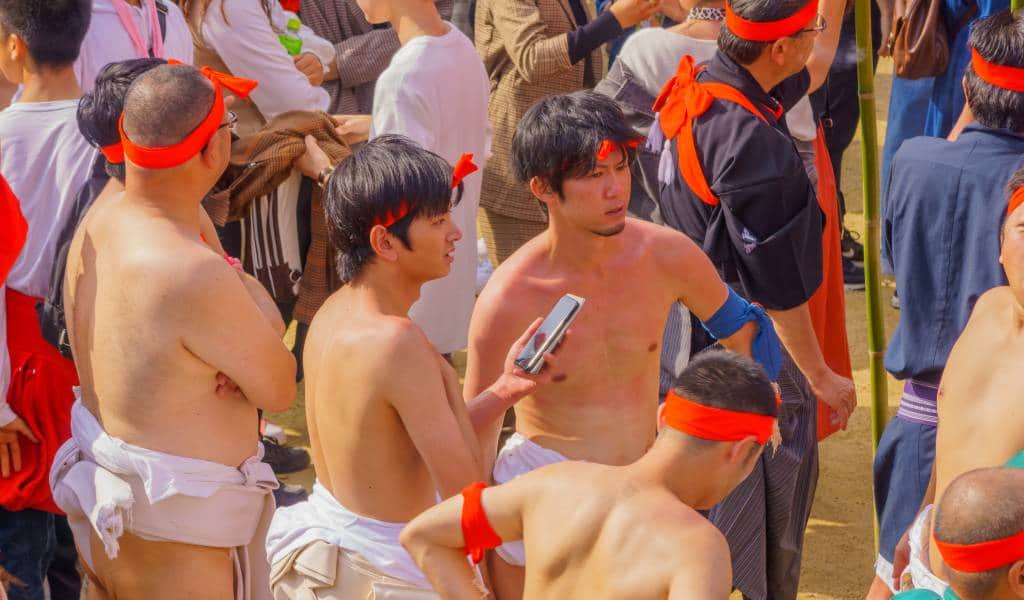 Edo-style Sex Appeal: All About Fundoshi, the Traditional Japanese Loincloth

What is a fundoshi?

A very ooh la la piece of clothing! A fundoshi (褌 or ふんどし), meaning loincloth in Japanese, is the traditional type of underwear, mainly for men. It’s a long strip of cotton tied and rolled into a kind of knotted tanga.

Until World War II, fundoshi were the normal undergarment for most Japanese men and women, as can be seen in old woodblock prints, from carpenters and fishers to craftsmen, merchants and samurai. But they fell out of favor when more comfy, stretchy boxers, briefs and panties were introduced from the West—which were also quicker to put on than tying your panties out of a piece of cloth every morning.

There are different styles–both traditional and modern. The mokko-fundoshi is tied like a tanga (half way between a thong and a bikini), while the etchu-fundoshi leaves a Tarzan-style front panel. The kuro-neko fundoshi is tied similarly to the more common mokko-fundoshi, but twists the fabric into a thong—leaving us wondering how comfortable it is…

Fundoshi are usually made from white linen or cotton. Silk crepe is also sometimes used, as it offers more grip than too-slinky plain silk. There are also thicker, comfy winter versions. Undone, a fundoshi is traditionally five feet long. However, some of the more modern versions that can be bought nowadays might be colorful, shorter, and of a slightly different shape to allow for faster and easier tying.

Where can I see men in fundoshi?

While there are also—rarely—a few women prancing around in fundoshi, you got a good chance of seeing men of all ages sporting this rather revealing item in Japan.

These days, they are mainly worn for traditional Japanese festivals by the mikoshi (portable shrine) carriers. A good one to check out is the Hadaka (meaning “nude”) Festival. Every February, an impressive number of nearly 10,000 men will gather at Saidaiji Temple in Okayama Prefecture wearing nothing but fundoshi. A sight not to be missed.

A good option in Tokyo is the Sanja Matsuri in Asakusa. One of the biggest in Japan, it is also famous for having tattoo-sporting yakuza among the loincloth-clad shrine bearers, so bonus points for that.

There are dozens more matsuri (festivals) all across Japan and Tokyo throughout the year that might involve some fundoshi action. A good indicator are shrine festivals that involve a mikoshi (portable shrine) parade.

You won’t see any fundoshi in sumo by the way. The loincloth worn by the wrestlers is called a mawashi (廻し). The cloth is much longer than a fundoshi, over 9 meters when unwrapped and weighs 3.5 kg to 5 kg. Not your everyday underwear choice as it is also decorated with matching silk fronds in the front.

Where can I buy one—for men and women?

The Japanese Fundoshi Association (isn’t it amazing what causes can be championed?) has their own fundoshi brand—unfortunately the link is in Japanese only (but you can make do with Google Translate). This online shop also sells the traditional type and has a comparison of the three different ways to knot it, as we described above.

If you ever visit Nagasaki, this specialty shop is worth checking out. For those in Tokyo, head to Don Quixote, Tokyu Hands, or Loft to get your hands on some original Japanese loin cloth.

Finally, eBay, Amazon, and Rakuten all have fundoshi on offer—and they’re affordable too. Try both spellings (褌 or ふんどし) to see what you can find.

And fundoshi are by no means only for men. In the last 10 years or so, several Japanese lingerie firms have started to make them for women, which have proven popular as night and homewear. They come in different colours, patterns and fabric options and are often a bit different in design compared to the men’s version. Think a shorter cloth version that can be tied into lose bikini pants.

Nope. Unfortunately there aren’t any fundoshi underwear vending machines. While Japanese vending machines selling school-girl panties have not lost their notoriety overseas, they actually became illegal in Japan in the early 2000s, so you won’t find those anymore either.

Tutorial on how to tie a fundoshi

Now to the fun part—turning your piece of cloth into wearable underwear.

There are some good tutorials on this online, but this anonymous man donning a fundoshi step-by-step is our favorite. Disclaimer: The video features an adult male demonstrating how to wear a traditional loincloth. While it’s not sexual in any way, it’s probably NSFW.