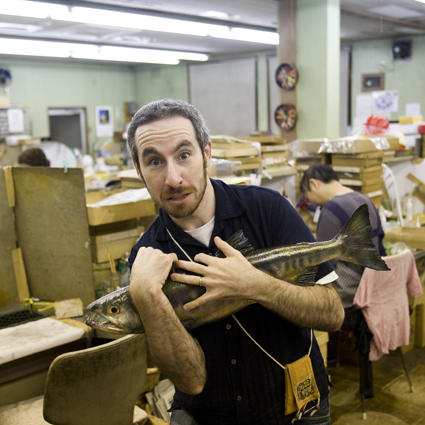 Tony and I know each other from school, and quite randomly we both ended up living in Tokyo. Having mastered Japanese, being a professional journalist, photographer and all round rather clever chap, out of all the (non-Japanese) I met in Tokyo, Tony is one of the most knowledgeable about and closest to cracking the enigma of Japan and the Japanese.

So without further ado, over to Tony:

What brought you to Japan/Tokyo?
I worked as a English teacher, a proof-reader, then got into journalism during a year at a Japanese newspaper in London. The original plan was to be here for six months.

Briefly describe a typical day in your life?
Being physically assaulted by my three and five year old sons while still in bed. Tokyo commute. Writing/editing/photography/speechwriting. Tokyo commute with added knackered. Dinner. The Gruffalo, Where the Wild Things Are, or possibly The Cat in the Hat.

What do you like most and least about Tokyo?
Most: The food. The people. That Tokyo is a photographer’s paradise. There’s a shot pretty much anywhere you point your camera.

Least: The sheer number of people, and the fact that you can barely do anything without spending money. (I know you are working on the latter).

What do you blow out money on (i.e. what’s the fruit of all your cheapo savings)?
Nikon lenses. Eating out.

What’s the best bargain you ever found in Tokyo?
The rent on a student dorm I lived in was 8,000 yen a month. The room was so small that the bathroom sink swung on a pivot. When you wanted to use the toilet you pushed it into the shower, and vice-versa.

Do you have a website/social media account we for people/stalkers who’d like to find out more about you or your work?