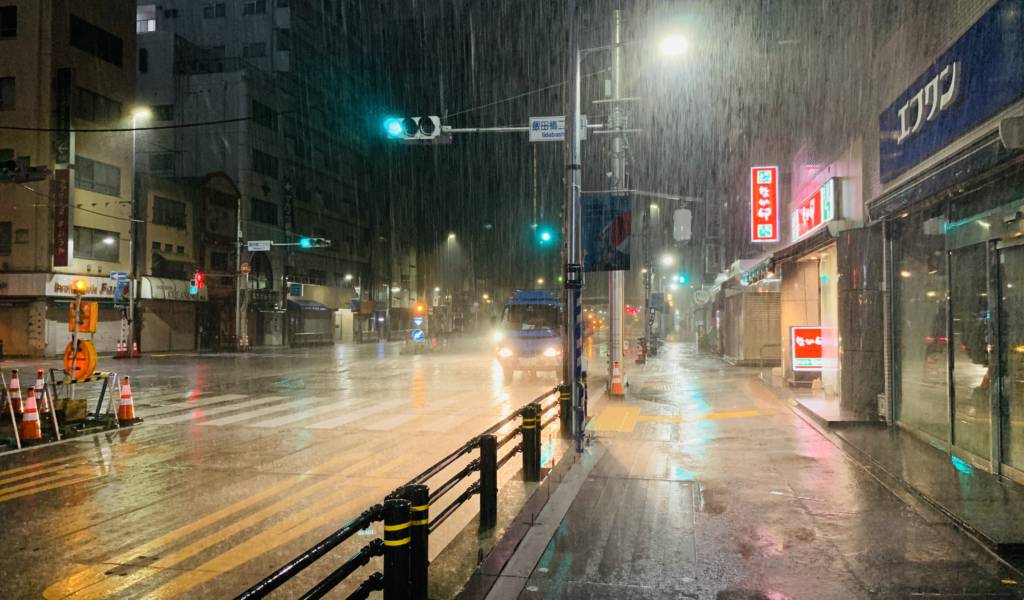 What to Do in a Typhoon: A Mini Guide

Late summer and early autumn is typhoon season in Japan. If you’re here between August and October, it’s quite likely that you’ll experience at least one “tropical cyclone”. Smaller typhoons may pass over central Tokyo without doing serious damage. Those in mountainous and coastal areas usually face much bigger threats. However, every typhoon should be taken very seriously—particularly those classed as super typhoons. Nervous in the metropolis and unsure of what you should be doing when a typhoon hits? Below, you’ll find some tips.

First: What exactly is a typhoon?

Whatever name you know them by, tropical storms are associated with dangerous winds, huge waves, extremely heavy rains, and flooding.

Note: Typhoons can occur at any time of year—their “season” is simply when they are most likely to develop.

In the event of a typhoon, keep an eye on the media for updates

Where to find general updates

When typhoons approach, Japanese TV and radio stations broadcast advance warnings with the expected time and area of landfall. The most authoritative source of information about tropical cyclones in Japan is the Japan Meteorological Agency, whose website we recommend bookmarking.

A good place to start gauging the severity of the situation is the Japan Safe Travel site of the Japan National Tourism Organization. This site provides general info on what to do, plus a long list of links and hotline numbers that provide help and information in case of emergency. Its Twitter feed is always up to date with the latest storm status.

The Japan Times has a special disaster news page, which can also be handy to bookmark. It becomes a live blog in the event of typhoons or other disasters in Japan.

Look out for emergency announcements—you’ll find out whether any special precautions or actions need to be taken. If you don’t speak Japanese, you can tune into NHK World News, which provides official information in English.

You might also find emergency announcements (or, in extreme cases, evacuation instructions) on the website of the ward you are staying in. The most central wards are Shinjuku, Shibuya, Minato, Chuo, Chiyoda, Nakano and Meguro.

However, most of those websites look like they are time-warped straight out of the early 90s, and the English icon only takes you to a translation software version. The best site to check is probably Shinjuku Ward’s, as it provides instructions on what to do in case of a natural disaster, in 10 languages.

While shops often stay open in the case of smaller typhoons (but not super typhoons), many schools and universities close until the worst has passed, regardless of the size of the typhoon. Their shutdown announcements tend to be made at the last minute. So if you work or study at an educational-type place, the first thing you need to do in a typhoon is stay glued to social media. Look at the institution’s Twitter account or Facebook page for updates—you could get the day off (though you’ll likely have to come in on a substitute day somewhere down the line).

Need travel insurance for your Japan trip? Read our guide to travel cover.

Where to find transportation updates

If you are worried that your flight might be canceled, check the Haneda and Narita Airport sites for official updates.

The JR East site will tell you if your Shinkansen (bullet train) is running on schedule.

For local trains that are part of the JR network, like the Yamanote Line, also check the above-linked JR East site. For the underground, most lines are under the Metro network, but some are privately owned, such as the Keio, Keikyu (connects to Haneda), Keisei (connects to Narita), Odakyu, Tokyu, Tobu and Seibu Lines. Those sites will provide brief key info in English.

It’s advisable to close all doors and windows tightly before a typhoon (to avoid them blowing out or being otherwise damaged). If you have shutters, they should be closed.

If you live here or are staying in an Airbnb/vacation rental, you might also want to bring any potted plants inside so they don’t blow away.

It’s also a good idea to take down your washing pole and store it safely, if you have one that balances on hooks on your balcony, or is otherwise moveable.

Bicycles should be secured or brought inside. Motorbikes also need to be secured, as they may blow over. Got a car? Don’t park it under a tree.

And if you have pets, it goes without saying that they need to be safely indoors with you.

Stay indoors during the storm

Typhoons are taken very seriously in Japan, as they should be. As with any extreme weather, during a storm or typhoon—of any size or classification—you should always stay safely indoors until it has passed. People do get hurt and sometimes even killed, though for smaller storms the risk of this is not always very high in Tokyo central.

Caution: Be sure to check the weather advice and whether anyone else is outside before you go out. Use common sense at all times, and if in doubt stay indoors. Regardless of where you are, avoid building sites, as scaffolding can be caught by high winds and cause serious and even fatal injuries. Also avoid rivers and other areas where there is a risk of flooding.

Don’t do anything that relies on public transport

Trains, including the Shinkansen, and buses may stop running, or run on reduced frequency schedules during typhoons, meaning that you may get stranded if you try to get somewhere on them.

Taxis may keep running, but the demand is high—and so is the price. Bicycles are best left at home—so if you really need to get somewhere, your best bet is to walk or use a private car if you have access to one. But, we repeat, please do not try and go anywhere until the typhoon has passed.

Note that airplanes are often grounded during typhoons—sometimes even over a full day or two, meaning that domestic and international flights can be thrown off schedule.

Important: Don’t forget to let your friends and family know where you are—just in case. And remember—the Japan Meteorological Agency website is useful for keeping track of typhoons and other weather events, and helping you plan your movements.

What should I do after a typhoon in Japan?

After a typhoon, it’s best to shelter in place until the authorities have confirmed that it’s safe to go outside. Check the news and social media for updates.

When you do go out:

Cheapo reminder: Your life is worth more than that reduced-price item at the local store. Keep yourself safe in the city during the typhoon. And if you’re somewhere mountainous or coastal, use extreme caution!

How can I prepare for a typhoon in Japan, in advance?

It pays to be prepared for natural disasters, and typhoons are no exception.

You can prepare for a typhoon in Japan by:

Remember: The Japan Meteorological Agency website carries forecasts and warnings. It’s a good idea to bookmark it if you are worried about a typhoon in Japan.

This article is in no way intended to replace authoritative weather advice and should not be taken as such. Mareike Dornhege assisted in the writing of this article. Last updated: September 23, 2020.