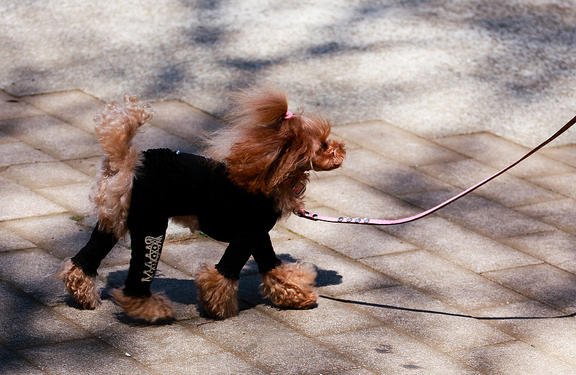 (Image by Kenski1970 via a Creative Commons license.)

The reason I didn’t put ‘Cheap …’ as I do for most posts is because I have a problem with the pet retail industry in Japan.  To call them ‘cheap’ would be to endorse the idea that animals are just another consumer product to be bought and sold and managed as inventory.  I don’t have a problem with selling pets per se, just with them being manufactured and packaged for retail consumption.

Selling ‘accessory’ cats and dogs in Japan is big business.  Pedigree miniature dogs at a pet shop in Roppongi seem to average about 200,000 yen each.  When you walk past the pet shops and see the fluffy bundles in the window, what you don’t see is the ‘puppy mills’ out in the suburbs where breeding dogs are confined in terrible conditions and unwanted ‘stock’ is disposed of.

Even so, the title of this post is still a misnomer.  Sure pets can be fed cheaply enough, but eventually you’ll be hit by vet expenses and if you want to go on holiday somewhere sans pooch or moggie, then you might need to use the services of a ‘pet hotel’. Vet fees can quickly run into the tens of thousands of yen for minor problems and pet hotel fees will rival those of the hotel you’ll be staying at while on vacation.

Hey but if people listened to these arguments no one would ever have a dog or a cat – and indeed in my family we have a dog of our own.  A good place to start if you’re looking for a dog or a cat (as we did) is a group called Animal Refuge Kansai or ARK for short.  Despite the name they have centres in both Tokyo and Osaka and rescue dogs and cats throughout Japan for ‘re-homing’.  Dogs and cats up for adoption can be viewed on the ARK website.  Most of the animals were either abandoned by their previous owners (sometimes because the owners got too old and couldn’t care for them), rescued from dog breeders who had gone out of business or more recently, captured in or near the Fukushima exclusion zone.  ARK requests a donation of about 15,000yen (this might have gone up) for each adoption. Considering that they vaccinate, de-sex and microchip each animal, it’s an extremely good deal.  Best of all you’re helping out a good cause and you won’t be supporting the pet retail industry.

There are also plenty of exotic pets available in Japan.  Ethical issues aside, you should probably avoid getting a 6.5 metre reticulated python.