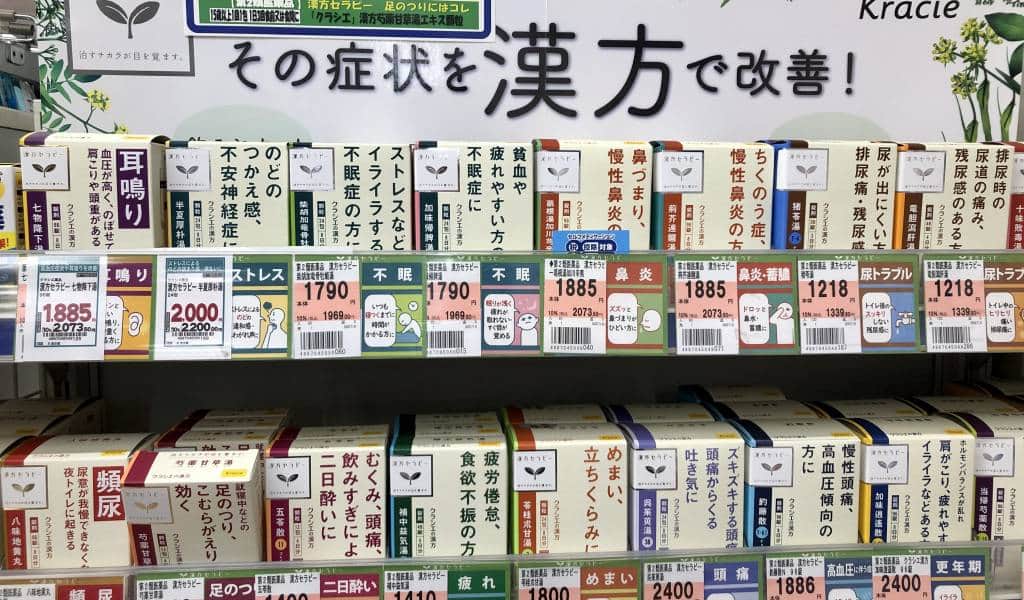 Kampo is arguably one of Japan’s best-kept secrets—many visitors and even residents have never heard of it, yet it has been an integral part of healthcare here for centuries. Japan’s answer to Traditional Chinese Medicine (TCM), kampo encompasses a wide range of powders and pills made from natural ingredients.

** Disclaimer **We’re not medical experts. This article is intended as an introduction to kampo and should not be taken as medical advice. Always consult a medical professional for advice on treatment.

Kampo (漢方) is available both over the counter at drug stores and as a prescription medication in Japan, and can be used in conjunction with (some) conventional medicines, or (sometimes) as a standalone alternative treatment. Here’s what you need to know about the world of kampo.

Kampo is a type of traditional Japanese medicine that has its roots in Traditional Chinese Medicine. It’s said that Buddhist monks brought with them medicinal knowledge of herbs when they came over to Japan from China in the 5th and 6th centuries, and that it was gradually adapted to suit the local population, becoming Japanese kampo.

Today, kampo is strictly regulated by the national government—it’s not just a bag of random herbs. The type and ratio of ingredients in each formulation is stipulated, the number of formulations limited, and the final products tested and approved. Research is conducted on the use of kampo in the treatment of various health conditions, and you can often find the published studies in English, just by searching on the web.

There are a few different pharmaceutical companies that manufacture kampo in Japan—Kracie and Tsumura are two of the big ones—but regardless of which brand you buy, you can expect the formulation to be the same. While you might find similar formulations in Traditional Chinese Medicine, the amount of each ingredient is typically a lot smaller in kampo.

What is kampo made from?

Japanese kampo is made from natural ingredients—mainly plants, sometimes with minerals and animal products included. Some of the core plant ingredients include:

There are many others, too, which you’ll see popping up over and over again in various kampo formulations. Most kampo comes in both pill and powder form. The powders, which you need to mix with warm water, can be extremely bitter—be warned!

What is kampo used for?

Japanese kampo is used to treat a wide range of health conditions—from the common cold to anxiety, PMS, stomach issues, headaches, muscle pain, acne and even as a complementary therapy as part of cancer treatment protocols.

Like TCM, Japanese kampo is designed to treat the whole body, rather than simply the symptoms of an illness, and the recommended formulations will depend on each person’s unique constitution. Before prescribing kampo, a doctor will typically check the patient’s tongue, abdomen and pulse, as well as their blood pressure. As mentioned above, kampo may be dispensed as a complementary therapy, together with conventional medicine, or as a treatment on its own.

This writer has used kampo for nerves, gastritis and other digestive ailments, as well as colds. All but one of the formulations have agreed with her over the years.

Kampo remedies typically have long names and lots of kanji. Here are a few that are commonly used for stomach issues:

And one that is popularly prescribed for colds is “kakkontou”. There isn’t a whole lot of English on kampo packaging, but searching online for the alphabetized name + kampo should bring up an English information sheet.

Where can I buy Japanese kampo?

In Japan: Doctors and drug stores

If you’re in Japan, you have two options: getting a prescription from a doctor, or buying OTC at a drug store. Many general practitioners will be happy to give you a script for kampo if you ask (if you don’t ask, they might assume you don’t know what it is, and aren’t interested in it), which you can then get filled at the chemist. Kampo is covered by Japanese health insurance, making this route the more affordable, cheapo-friendly one.

If you see this sign outside your doctor’s office, or outside the chemist, it means kampo is an important part of their practice.

But even if you don’t see it, they will probably still be able to prescribe or dispense kampo for you. That includes doctors at big hospitals in Japan—just ask.

Note: Traditional Chinese Medicine is also available in Japan, but it is not prescribed by Japanese medical doctors, nor is it covered by Japanese health insurance. You can find it at the offices of specialist TCM practitioners, TCM stores, and some pharmacies. The much higher price tag is an easy way to tell the difference between TCM and kampo in Japan.

Outside Japan: Online and from local practitioners

If you are reading this from outside Japan, you will need to look for a kampo practitioner in your area, or purchase OTC kampo online. One online store that stocks kampo is DokoDemo—they also sell Japanese beauty products, snacks (including Kit Kats) and other goods.

Before ordering any kampo online, it’s a good idea to check that you can import it into your country—you don’t want a kerfuffle at Customs. You’ll also want to check in with your doctor—more on that below.

There are a couple of things to keep in mind before taking kampo remedies.

All too often, people assume that because a medicine is natural or herbal, it’s 100% safe to take with anything and everything. This can get you into trouble. Some of the ingredients in kampo may interact with other medications you are taking, so be sure to check with your doctor before starting traditional Japanese medicine.

One example is anti-anxiety, anti-depressant and anti-psychotic medication. Others include blood thinners and kidney treatments, but anything and everything you take should be carefully checked. The Western drugs or other herbal remedies you take could interact with kampo aimed at treating similar or totally different conditions. The kampo could dangerously reduce or heighten the effect of the medicine, or have an otherwise toxic interaction—so do take care.

Similarly, if you are already taking one kampo remedy, you shouldn’t just add another one to the mix without consulting a doctor. Kampo can interact with other kampo, too.

While many kampo remedies are derived exclusively from plants, there are some that contain animal ingredients, so vegetarians and other folks with dietary restrictions will want to keep an eye out. One example of animal products you may encounter is powdered oyster shell, another is gelatin.

Where can I find out more about Japanese kampo?

One of the best English-language resources on kampo we’ve seen is the “Kampo Virtual Class“, which is part of the Center for Kampo Medicine at Keio University School of Medicine. It’s not an actual class, but is a great introduction to kampo, with a full, alphabetized catalogue of the types of kampo you might encounter. You can go through each entry and see the conditions it’s prescribed for, as well as the ingredients. There is also a catalogue of the herbs used in kampo.

In Japan, only medical doctors can fully study and practice kampo, but if you have a keen personal interest and can read Japanese, you might be able to find some books on Amazon or other online bookstores. There is also the International Society for Japanese Kampo Medicine, which has resources like Q&A interviews with practitioners, in English.

This post is in no way intended as medical advice, and we did not receive any sponsorship for publishing it. However, it does include affiliate links—if you make a purchase from our retail partners, we will earn a commission. Always consult a qualified medical practitioner if you have any health concerns.