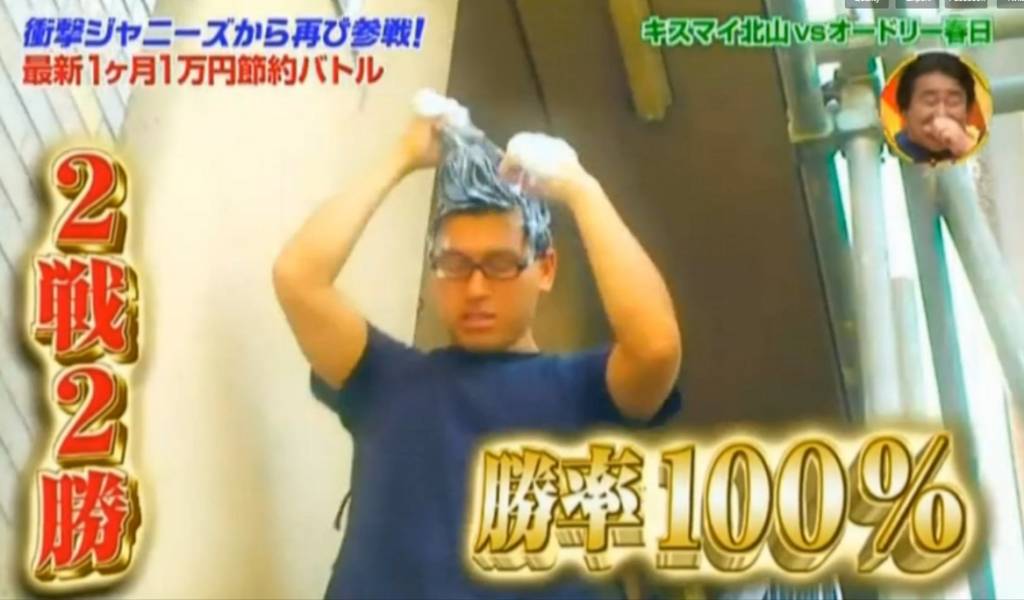 Setsuyaku Battle - Two Japanese Celebrities Battle it out to Live on Less than 10,000yen ($US100) for a Whole Month

Twice a year, Japanese variety TV program Ikinari Ougon Densetsu (Sudden Golden Legend) runs a competition called Setsuyaku Battle (Economising Battle) in which two Japanese celebrities compete against each other for 1 month living on less than 10,000yen. The competitor with the most left over at the end of the month, wins.

One particular celebrity – a comedian called Toshiaki Kasuga – has made the competition his own.  He has won two previous contests and is renowned for his cheap lifestyle – and it’s not just when the cameras are rolling.  Kasuga reportedly lives in a 39,000 yen apartment in Minami Asagaya.  In fact he’s become such a part of the challenge that they decided to film the event at his apartment – with his competitor staying in the apartment next door. 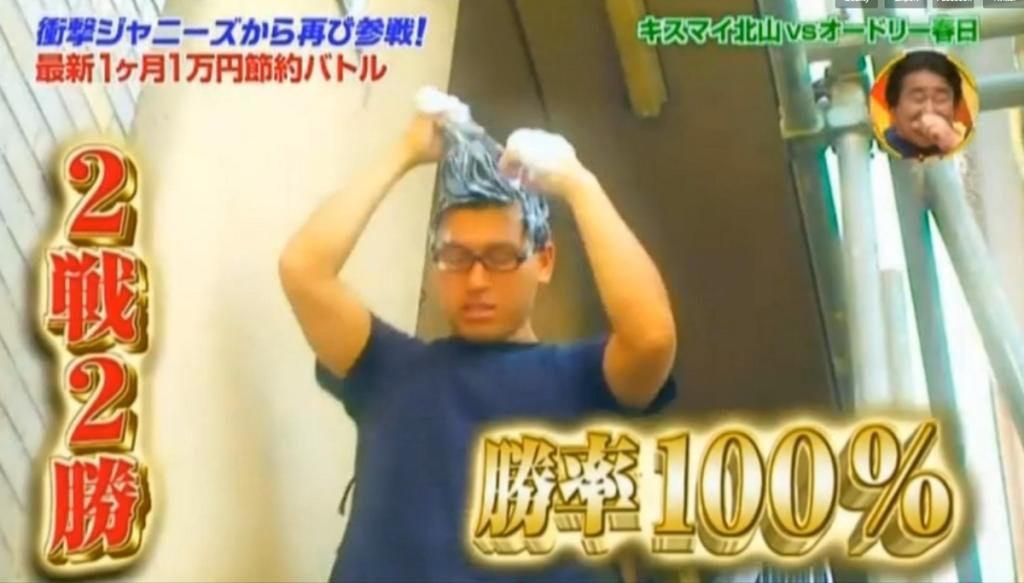 Competing against Kasuga this time is Hiromitsu Kitayama from boy band Kis-my-Ft2 (pronounced Kiss my foot too) – another one of the Johnny’s production line of Japanese boy bands. 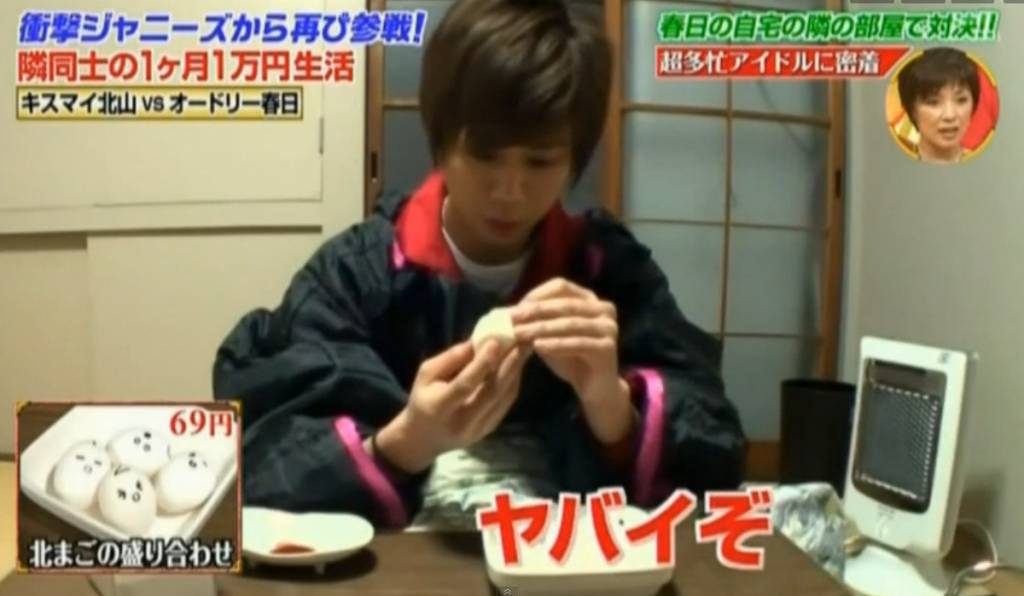 It would appear something of a mismatch as despite his 27 years, Kitayama seems to lack basic survival skills.  While Kasuga picks up 19yen packs of Udon at Sake & Gyomu Supermarket, Kitayama buys 50 eggs.  Worst still, he is surprised that his eggs are still soft inside after boiling them for only 4 minutes. As the contest progresses, Kasuga lets him in on some of this secrets and he starts to branch out with some udon based meals of his own. 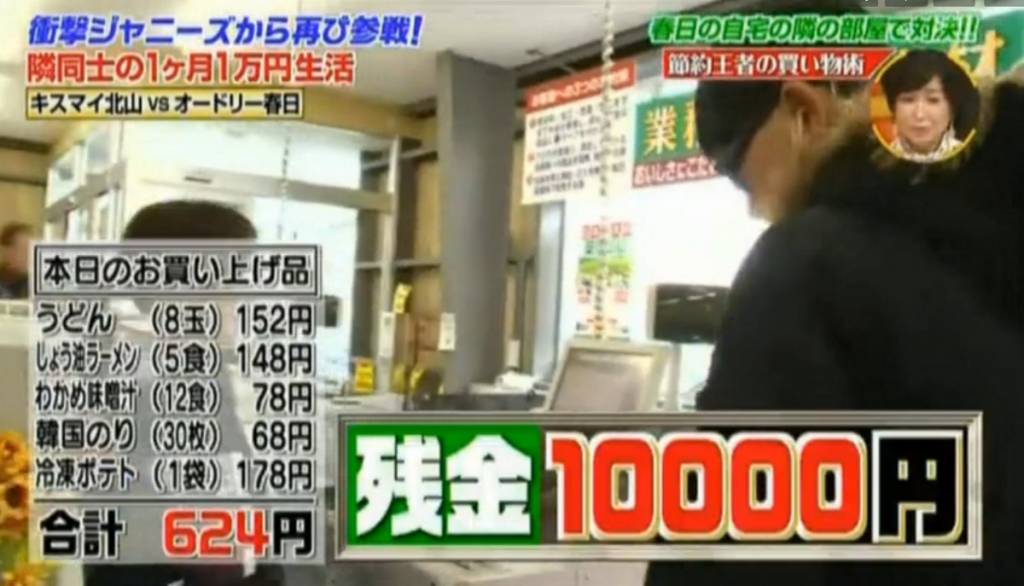 The crew follows the competitors around as they shop for ingredients.  Kasuga, billing himself as the Housewife Hero for his economising tips, hunts out bargains, makes his own cooking stock and even disassembles a beef gyudon meal and spreads out the ingredients over 5 days.  A female former competitor of Kasuga chastises him for his self-appointed title, saying that no housewife in their right mind would be interested in his recipes as they don’t contain any vegetables. 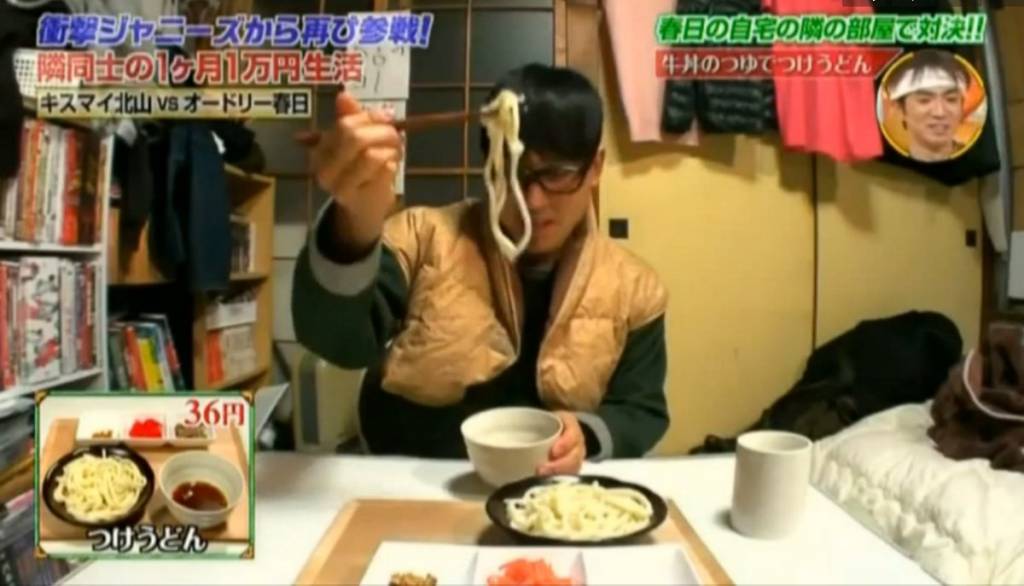 Despite this, there are sites and blogs dedicated (in Japanese) to recording the recipes that Kasuga and Kitayama come up with. In the picture above Kasuga has produced a tsuke-udon meal for just 36yen. 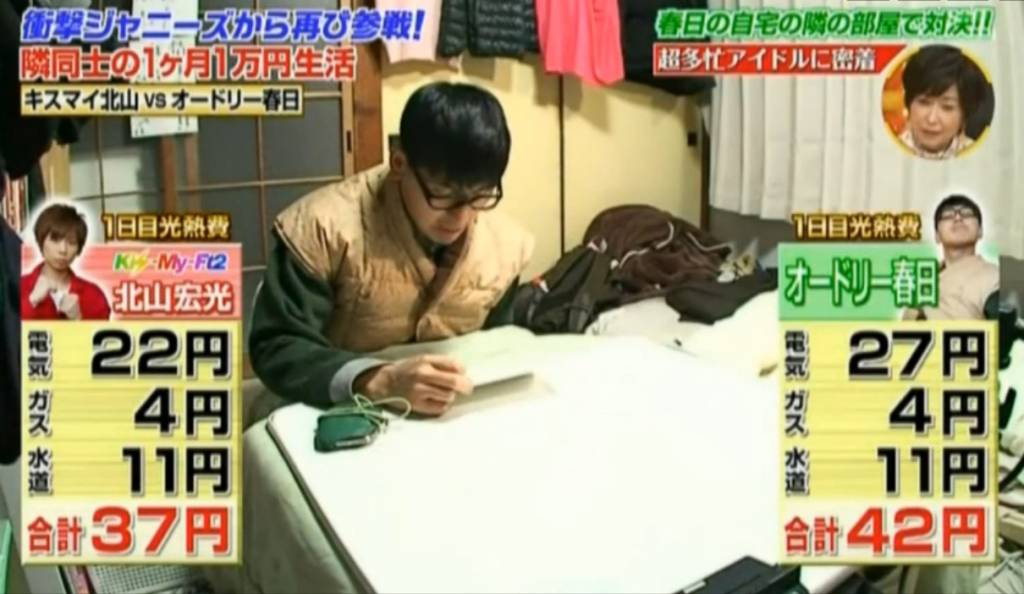 Although the 10,000 yen doesn’t include rent, it does include utilities.  Each day, the producers deduct money for lighting, gas and water.  An ongoing joke has Kitayama and the crew constantly invading Kasuga’s apartment in the evening to increase his electricity bill.

As this post goes live, there is one more episode to run.  Ikinari! Ougon Densetsu (link in Japanese) screens on Thursday evenings from 7pm on TV Asahi.

For a taste of previous episodes, take a look at the video below.