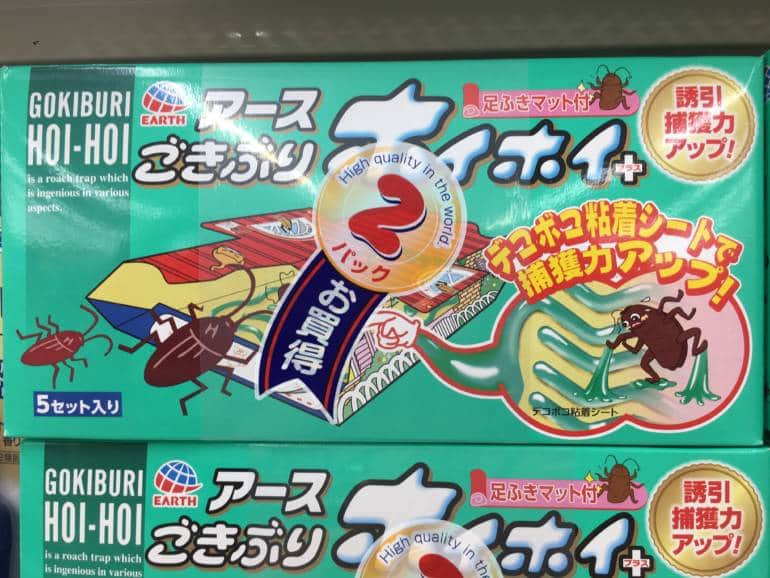 Help, Roaches Have Invaded My Home!

People commonly look forward to fireflies, barbecue parties, picnics, fireworks, festivals and yukata in summer. But what people don’t look forward to is an uninvited house guest: the cockroach. While Japan is generally a clean country, it also happens to be home to some species of roaches, and they just happen to be the ones that are disgustingly big and dark, and the ones that can fly. Typically, these nasty buggers come out during summer months (June-September), when the weather is warm, but some come out as early as April. In any case, some genius created a (sadly no longer online) for you to check how likely it is to see roaches on a given day.

In my country, we have a saying that there’s no such thing as “macho” in the face of a flying cockroach—not even the toughest and biggest people want to deal with them! As for Japan… well, I’ve heard apocryphal tales of people taking up residence in nearby hotels when they see roaches in their apartment. That sounds like a tall tale, but in any case, it just goes to show that no one is happy to see even a single roach.

If you want to roach-proof your home, the first step is to make sure that your home is clean. Don’t leave litter scattered around, take out the trash regularly, don’t leave food waste in sinks, seal the cracks in your home, and spray your kitchen with one of those kitchen sprays that aren’t harmful to humans but make food waste less attractive to roaches and other pests. However, no matter how clean your home is, that’s still not a guarantee that your home will be roach-free, unfortunately! Neither is living in a higher floor of a building (although it does reduce the likelihood of a roach infestation). If you’re living in an apartment block, just hope that your neighbors also observe a decent standard of cleanliness; otherwise, roaches can still creep into your home. A restaurant below or next to your apartment might also make a roach infestation more likely, as the food waste will attract pests.

And even if your neighbors keep clean and you don’t live near a restaurant, you’re still not guaranteed to be safe from the roaches! No matter how clean an apartment building appears to be, if it’s poorly insulated and its piping is old, roaches can still get in through drain pipes and such. Just thinking about the ways roaches can get into your apartment can make you really paranoid!

Fortunately, because the Japanese hate roaches as much as you do, there’s an array of products you can use to get rid of cockroaches. Here are some of them:

1. Gokijet, other insecticides, and barrier sprays

This handy spray is going to be your best friend. “Goki” is short for “gokiburi,” the Japanese term for a roach, and is specifically meant for roaches. It’s very effective at killing roaches instantly, but the smell can be overpowering. If you don’t want to get close to those pesky roaches, some types of Gokijet have a long nozzle so you can eliminate them from a distance. If you can’t read Japanese, look for green spray cans with illustrations of roaches and these characters: “ゴキジェット” (the katakana for Gokijet). Gokijet helped me the most, but the fumes made me feel slightly dizzy.

There are, of course, other brands in the market as well, but Gokijet seems to be the best-known. There are even freeze sprays for maximum effect. If the fumes are a problem, there are also sprays made of essential oils and other natural ingredients, one example being Mushi-san Bye Bye.

If prevention is better than cure, there are also some barrier sprays that can supposedly keep roaches out just by spraying them around the house. The maker of Gokijet has one called Goki Barrier.

Fellow cheapo Greg finds this method the most effective, as they’re not much trouble – the only ones they cause trouble to are roaches! Containing boric acid and other ingredients, these round pieces of plastic with the bait inside can be left around the house and outside for roaches to chew on. It’s that simple!

They last about 6 months. As long as they’re well distributed through your house, you won’t see another one of the sneaky critters from the day you put them down. You might not have the satisfaction of counting the corpses, but do you really care what happened to them as long as they don’t cross your path again?

Popular brands include Black Cap (ブラックキャップ) and Combat (コンバット). We’ve also spotted “White Cap” (made by the same company as Black Cap) but we’ve only seen it outside Japan!

These are sticky traps with bait that you lay out to capture roaches. Greg doesn’t find them effective, but they work for some people. Some of them just look like sticky mats that you lay out, while others can be best described as a roach motel, as they’re box-like and have cutesy designs. You don’t even have to see the roaches when disposing of the traps. One popular brand is Gokiburi Hoihoi, which means, “Roaches, shoo!”

Written by: Tiffany
Filed under: Household | Living
Tags:
Sharing
Questions or comments about this article?
Start a thread on our community forum
Ask our local experts about Tokyo