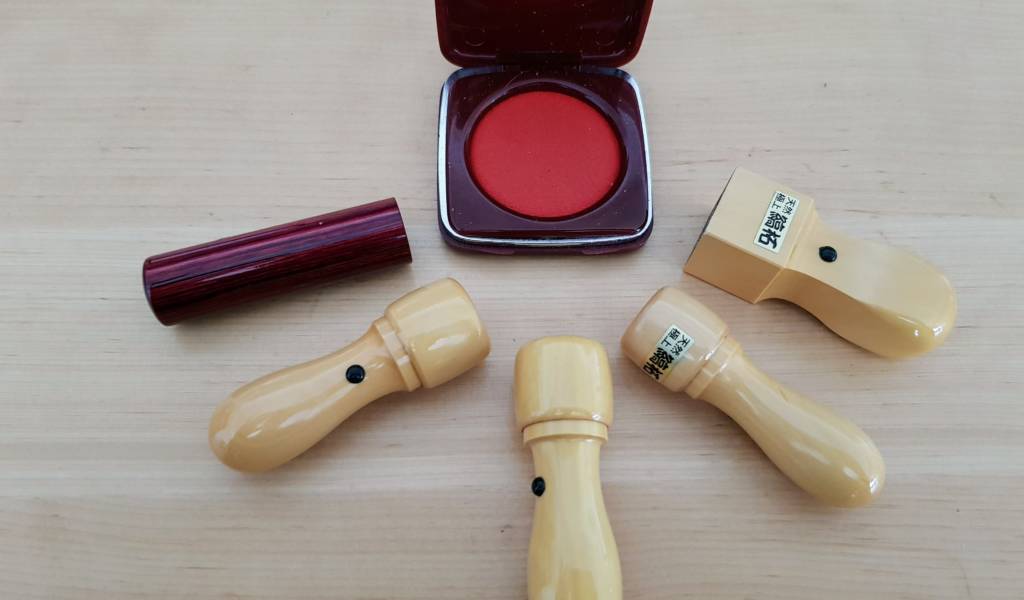 Making Your Mark: A Guide to Getting your Personal Seal in Japan

While a signature is all you need to authorize a contract in most countries outside East Asia, in Japan—as well as Korea and to a lesser extent China—a personal seal, known as inkan or hanko in Japanese, is what you’ll need.

What exactly is a hanko?

A hanko/inkan (used interchangeably) is a carved stamp that can be used in any situation where an individual, or an individual on behalf of a company, might otherwise use a signature or initials. Signing contracts, doing your banking (at a bank) or receiving a parcel are just three such cases. The necessity for a hanko and even the type of hanko may vary depending on the situation.

Although the Japanese government is (reportedly) phasing out the use of hanko in many situations, you should expect the seals to stick around for a good few years yet.

There are three common types of hanko used by both individuals and corporations:

A jitsu-in (literally meaning “actual/true seal”) is the one you would use when signing a contract. If you’re a freelancer and you need to sign a contract with a company, you need a jitsu-in. The same goes for other situations like setting up a company or buying a house. For the jitsu-in to have legal standing, you must register it at your city office. After you’ve registered it, they’ll also issue you with a “inkan card” which will allow you to print certificates of seal registration. When signing an important contract, you’ll often need to impress your seal and provide the certificate to prove that it’s your inkan and that it’s registered.

A ginko-in is simply a hanko for financial transactions. Instead of registering it with your city office, you just register it with your bank(s). It can be used to withdraw money from your account or sign up for a loan, so you should look after it. While Japanese patrons are typically required to register a ginko-in when they open a bank account, most banks don’t require it of foreign customers. One big exception is when you start a company. Since a company isn’t a real person and can’t sign anything, you need to register a ginko-in when you open an account.

A mitome-in is your regular, everyday hanko which you use for everyday things—like receiving parcels or for stamping on an invoice if you are a freelancer. The mitome-in is not registered anywhere and has no legal standing.

Some people use the same inkan for all three different purposes, but given that the jitsu-in is equivalent to your signature, and it can be easily copied, the less you use it the better. Also, for almost any situation where a mitome-in is needed, a simple signature will suffice.

Do I really need a hanko?

If you don’t need to sign contracts, then you probably don’t need one. A lot of foreign residents get a hanko just because it makes them feel like less of an outsider and they can avoid the teeth-sucking long pause before, “Well, I suppose you can just sign it instead—because you’re a foreigner.” If you do run into a situation where you require a hanko, the whole process from ordering your inkan to registering it can be done in three days or less, so there’s no rush to get yourself inkan’d up before you actually need it.

What are the rules for a hanko?

The only rule for what can be put on a hanko is that it has to be at least part of your name. You can use your whole name, your last name only, or even just your first name. You can’t register an inkan with characters that aren’t part of your name (either Latin alphabet or katakana), so if you had your sights on that cool 20-stroke kanji character that sounds a bit like your name to adorn your hanko, it will likely be rejected. You can have your name on the inkan in either Latin alphabet or in katakana. If you choose katakana, make sure you have a katakana version of your name registered (this may be recorded on the back of your residence card) at your city office or they may reject the inkan.

For security reasons (to reduce the possibility of counterfeiting), it’s recommended to Japanese people that they use their full name on the hanko. However, non-Japanese names often contain a lot more characters than your typical 4-to-5-character Japanese moniker, and space is limited, so just your last name or only first and last name might be preferable.

So what’s the process and how much does it cost?

Step one is to order your hanko from a hankoya (hanko shop).

Hankoya used to be a fixture of every neighborhood of Japan, but with chains taking over and a lot of the ordering now happening online, hankoya are more difficult to find than they used to be.

Online hankoya include hankoya.com, Hanko-Store.com and office supplies giant Askul. Not surprisingly they’re not available in English, so if you struggle with reading Japanese, you’ll need someone to help you.

When ordering, you start by choosing the material. Prices start at ¥2,047 for the smallest, cheapest wooden hanko and go up into the tens of thousands of yen if you want to rock a hanko made from premium materials like silver or titanium.

Hankoya.com clearly states that they do not use elephant or mammoth ivory, with a message on the site regretfully informing hanko shoppers that the material is no longer available due to that pesky CITES. Sadly, a dirty secret of the inkan industry in Japan is that there are still shops advertising and selling inkan made from elephant ivory. If you shop at a hankoya that makes inkan from ivory, you are part of the problem. One shop that continues to use elephant ivory is “Hankoyasan 21″—one of the biggest chains with stores throughout Japan.

After choosing the (not ivory) material, you select the size and then the typeface for the hanko. Often, curly, almost illegible traditional characters which blend into each other are used on hanko, but this doesn’t look nearly as cool with katakana. Next, you input the characters as you want them to appear on the inkan. You can choose whether they send you a draft design for review before the inkan is made. Lastly, choose the payment method. Those without a Japanese credit card can rejoice as there is a payment on delivery option.

Once your hanko has arrived, take it along with either your residence card or your “My Number” card to the inkan registration section (yes there’s a special section) of your local city office. Fill out a simple form and pay ¥50 for your inkan card and you’re done!

If you’re just looking for an inexpensive hanko as a personal souvenir or as a gift, you can find a huge assortment of standardized hanko—with common Japanese names, or a single hiragana/katakana/kanji symbol—at most 100 yen shops. Keep in mind that these hanko are quite small and not unique (some with words like “peace” or “dragon”), so they will not be accepted for official purposes (like the jitsu-in or ginkou-in), but only as general seals (mitome-in).

So, what if you really need an official seal, but you are not willing to waste tons of money on it you ask? Well, Don Quijote is the answer with its fancy-schmancy (not really) hanko box—a machine that will engrave your seal in a few minutes. It’s generally stationed near the check-out area, but ask for it if you can’t see it. These hanko machines are more likely found at “regular” Don Quijote stores in major cities, rather than at the “Mega Don Quijote” locations in the ‘burbs and countryside (although the name would suggest otherwise).

The interface is in Japanese, but it’s relatively easy and intuitive to use it (don’t stress about all the strange kanji: green button means proceed, red means back). You can select, move, resize and change the font of whatever you want to write, mixing kanji, katakana and the Latin alphabet as you like. The touchscreen is not perfect, but with a bit of patience you can get really great results. The price starts from ¥500, and goes up with better quality materials and larger size. Ok, it’s a lot more than the 100-yen ones, but the better quality and customization make these hanko a lot more useful.

Oh crap, I done lost my hanko, what do I do now?

Because your hanko has the power of a signature, if it’s stolen, you should report it to the police and cancel the inkan at your city office. To cancel your inkan, you’ll need either your residence card or your “My Number” card as well as your inkan card. There is no fee for canceling your inkan.

If you’ve lost your inkan (a surprisingly easy thing to do!), then you should order a new one before visiting your city office. At the city office, they’ll ask you to fill out a form to cancel your old inkan and then fill out another form to register your new inkan. The inkan card is connected to your hanko, so they’ll need to reissue your inkan card for which there is a small fee of ¥50.

This also highlights the benefit of not using the same hanko for your banking. If you’ve registered your lost hanko at the bank, you’ll have to go there and register your new one—at each financial institution. Also a good argument for sticking with your signature!