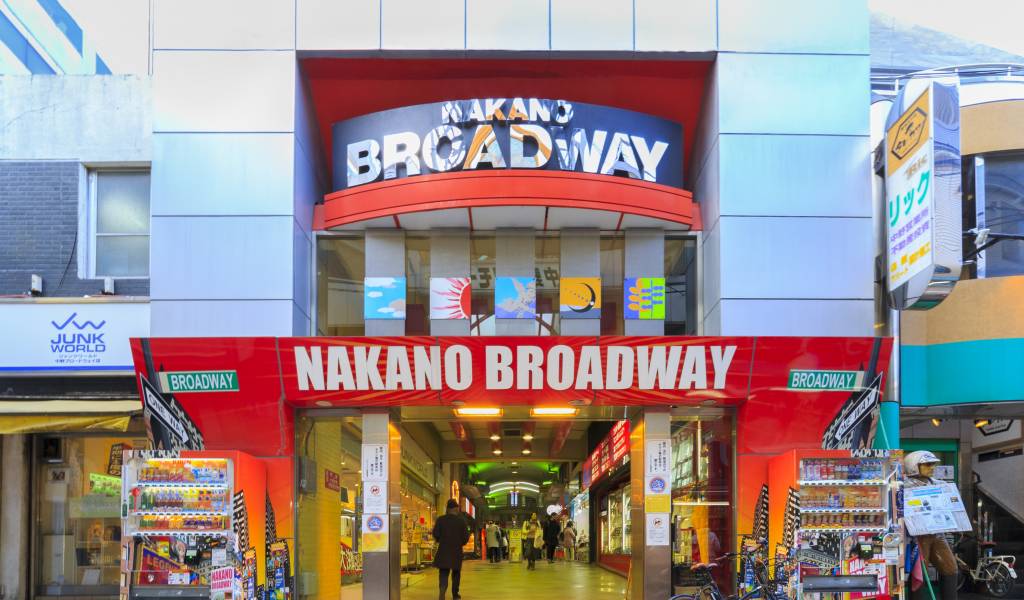 This might come as a shock to some of you, but I’m considered a geek in certain social circles. I’m not sure if it’s because of my desire to insert Terminator 2 into every conversation or my spot-on impression of a lightsaber, but people everywhere just seem to label me as such. Personally, I don’t see it. Usually I just blow it off. Other times I point at them and yell “Expecto patronum!”

Akihabara, the so called “otaku haven” to idol chasers, anime aficionados and game addicts the world over, today feels more like a tourist trap than anything. However, if I really did want to splurge on that high-kick posed Chun-Li action figure, I’d make my way to Nakano Broadway. It’s massive emporium for all things geek. Overstocked with anime, collectibles, tech and all the niche stuff you can find in Akihabara, only condensed into one single place.

Nakano Broadway has really ousted Akihabara as the go-to place for finding deals on brand goods, cheap knock-offs, and tech parts. The first time you visit you will be overwhelmed by the number of shops and awkward anime girl ads posted up everywhere. Akihabara has that stuff too of course, but Nakano Broadway really feels like it caters to your specific taste.

Every shop is special or unique. Meanwhile, the main strip at Akihabara is filled with duty-free stores and game shops with fixed prices all down the line, and unhappy looking maids that will get real—and real fast—if you even think about taking their picture.

And if you’re looking for old-school items, don’t even bother with Akihabara outside of the Mandarake store. On the other hand, Nakano Broadway is a nostalgia goldmine. I am an old. I have no idea what a Naruto is or how someone can make a show about Clorox Bleach. I asked my high school students if they liked YuYu Hakusho or Tenchi Muyo and they just stare at me and blink.

I mention that swimming anime or one of the other hundred exaggerated sports anime out there and they’re suddenly the most attentive English students in Japan. I’m probably just blissfully uncool, but tell me this, dear reader: Would an uncool guy have a Yusuke Urameshi charm on his iPhone? I rest my case. Speaking of which, do you have any idea how long that would have taken me to find in Akihabara?

Speaking of Mandarake, Japan’s largest distributor of collectibles, Nakano Broadway is the franchise flagship. While there is only one Mandarake amidst the dozens of Softmaps in Akihabara, there are 26 Mandarake specialty shops making up all four floors of Nakano Broadway from sports memorabilia to Star Wars. And the retail corner located on the 3rd floor in particular is a real sight to behold.

Thousands of people buy and trade anime, manga and collectibles here every week. It’s like an otaku version of the Tsukiji Fish Market. If you’re looking for something in particular, there is a pretty good chance you’ll find it in one of the Mandarake at Nakano Broadway.

You really don’t need to be an otaku to enjoy Nakano Broadway. The basement, first floor and alleyways around Nakano Broadway are packed with normie stuff from Uniqlo to izakayas. The famous ice cream shop Tokudai Soft Cream found in the basement is also worth a mention for its “eight layer challenge.”

As the name implies, it’s an eight-layer tower of soft-serve ice cream on a cone all for the cheapo price of ¥390. So whether you consider yourself a full-fledged otaku or you’re just interested in the curiosities or others, or even if you just want a massive ice cream–induced brain freeze, Nakano Broadway has a little something for everyone.

Open with Maps
Nakano Broadway
Nakano
Most stores are open 12:00 to 20:00
Written by: Aaron Baggett
Filed under: Anime And Gaming | Shopping | Things to do
Tags:
Sharing
Questions or comments about this article?
Start a thread on our community forum
Ask our local experts about Tokyo