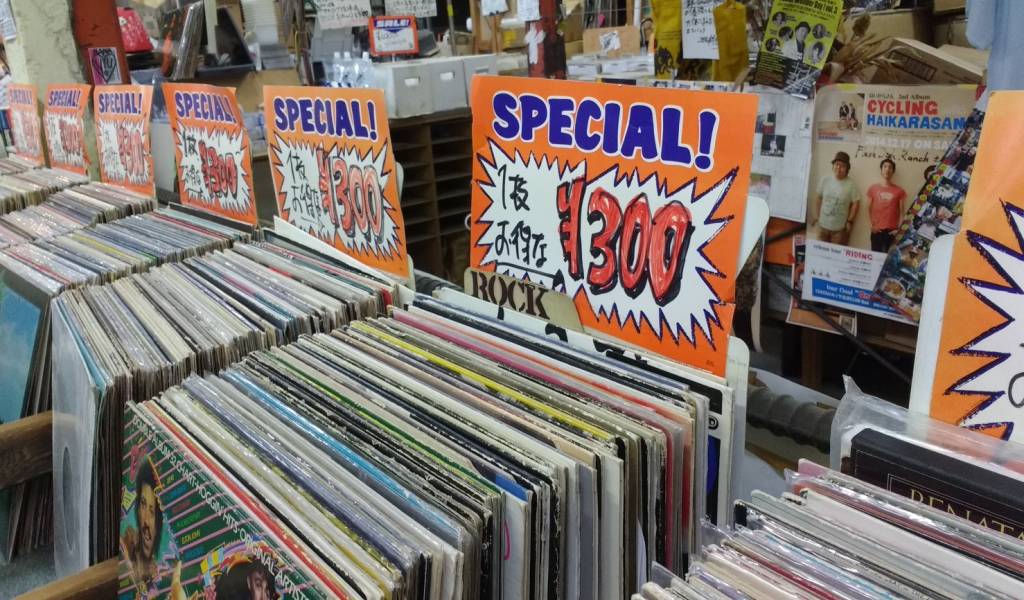 If you’re a fan of vinyl—both new and old—then Tokyo is one of the best places in the world to be. Shimokitazawa, as the home of Tokyo’s indie music scene, is one of the top spots to start exploring, with plenty of record shops within easy walking distance.

Before you set out to seek vinyl nirvana, don’t worry about setting your alarm clock to get out of bed early—only one of the shops listed opens before noon and some don’t open their doors until as late as 2pm.

With its distinctive entrance (see below) wedged between two sections of the same game center, this second-floor used record shop is the most Shimokitazawa-like store you could imagine. Music blares from old boxy speakers, murals decorate the walls and flyers for gigs are piled up as you ascend the stairs. Awaiting is box after box of vinyl treasure. More than any other shop, Flash Disc Ranch elicited those “oh wow” moments as this author flipped through the crates.

A feature of Flash Disc Ranch is the large number of boxes filled with 300 yen records. You probably won’t find anything amazing here, but some of those 70s and 80s covers are worth the 300 yen by themselves. The records in the regular crates range in price from about 1,000 yen up to 3,000 yen.

The Shimokitazawa branch of this used record and CD store chain is located on a busy road about a 5 minutes’ walk from the south exit of Shimokitazawa Station opposite the Setagaya City Hall. The floor space and the selection are huge, with records in good condition from around 400 yen. Original pressings and records that collectors might be interested in are also available for up to 10,000 yen or more. Most decent stuff is in the 800 yen to 2,000 yen range. Because the place is so huge, they have pretty much every genre well covered.

In addition to vinyl and CDs, they have you covered with accessories and equipment including record bags and turntables.

Up two flights of stairs, this place is filled to the gunnels with rare underground vinyl. If you’re looking particularly for UK dub, drum & bass, trip hop, dubstep and any genre or sub-genre you’d care to mention, there’s a good chance that you’ll find it here.

Warning: This place is so stuffed with records that if you’re slightly larger than average, you may not fit through the aisles.

Jet Set is a relative newcomer with a modern interior and young staff. Used records seem to be out numbered by new records with an emphasis on electronic genres. They have a few boxes of used records including some reggae and dub.

This is a small shop with a reasonable amount of vinyl down a residential side street off Ichibancho Dori.

Apparently the store was opened in 2013 by the owner returning from Brooklyn where he had run a similarly named record shop. Due to this association, the store allegedly has plenty of records from New York and Chicago DJs and music producers.

The store has DJ events on the weekend—hence I couldn’t get in to appraise the selection due to the chin-stroking crowd watching a man operate a turntable.