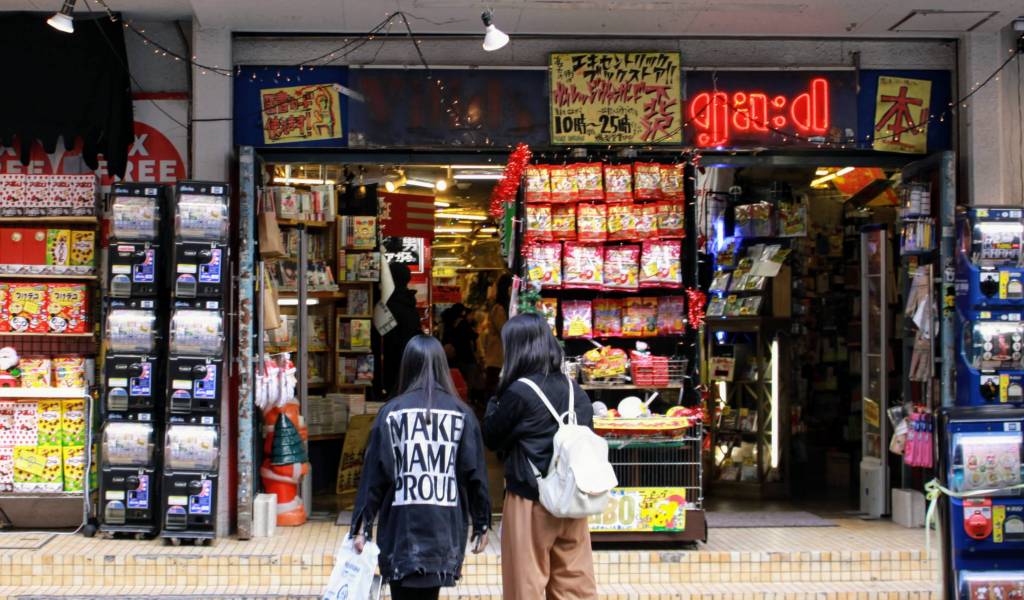 Scattered across the underbelly of Tokyo is a chain of vintage bookstores that serve as hideouts for geeks, nerds, and other otaku. The shops are stocked to the ceiling with character T-shirts, odd sunglasses, weird wigs, clocks, dishes, buttons, merch, lava lamps, and a whole bunch of stuff that seems to have no function other than to amuse. And of course, there are heaps of rad books, especially if you’re fond of curry recipes and manga from the 80s.

Village Vanguard is a break from the constant nightlife that tends to surrounds each branch; away from all the flashing neon lights, pachinko machines and AKB48 songs, the so-called “exciting bookstore” offers an escape into a retro, random universe. Pop culture abounds, including The Simpsons, Star Wars, Akira, Chibi Maruko, and that one old Japanese anime you can’t remember the name of but know was all the rage back in the 70s.

Teetering columns of candy-colored comics and toothy bobbleheads form a maze of sorts; be careful, though, because a single twist can lead you to an even more bizarre corner. At the store I visited, a right turn from life-sized Beatles’ inflatable dolls led to a “vintage” corner full of creaky fountain pens and fake British East India Company charters, which connected to a series of rainbow afros and maid costumes. Then there was that corner dedicated to the Gothic, stacked with skulls and handcuffs ….

Village Vanguard caters to the lifestyle and personality quirks of obsessive fans. If you’re one of those people who tend to shut themselves up in their homes, not answering the phone or door for a week straight while marathoning an entire season of some anime or TV show, then make sure to stock up at Village Vanguard first.

Need some comfy sweatpants or a T-shirt with your favorite character on it? Check. Sick of the stuffy odor of an uncleaned house and (ahem) body? A rack of scented candles and bottles of perfumes awaits. Tired of having to go out every few days to buy snacks and groceries? No problem; Village Vanguard sells everything from Hershey’s kisses to licorice whips, as well as instant curry rice and soba noodles for some basic nutrition. Attractive bishounen and bishoujo (beautiful anime guys and gals) smolder at you from the curry packets, enticing you to buy about a dozen of them.

The bookstores also serve as great gift shops. For example, your friends might like a “curry plate” shaped like a Japanese-style squat toilet. In effect, they get to eat curry out of a loo – I can’t think of a better birthday present.

Although not always cheapo-friendly, Village Vanguard stores brim with so much stuff that it’s impossible not to find something under 1 000 or even 500 yen.

But even if your wallet is flatter than a Japanese rice cracker, don’t forget to pay a visit. Go with your friends, tip-toe along the cramped labyrinth of books and bobbleheads, and try to name the obscure anime that remains nonexistent in mainstream Tokyo, but apparently tops Naruto at Village Vanguard. If anything, visit to take a break from your routine; after all, not everything in Tokyo is about karaoke and craft beer.

Odaiba Sangenjaya Shibuya Shimokitazawa
Official Website
Written by: Nikita Nagras
Filed under: Shopping | Things to do
Tags:
Sharing
Questions or comments about this article?
Start a thread on our community forum
Ask our local experts about Tokyo