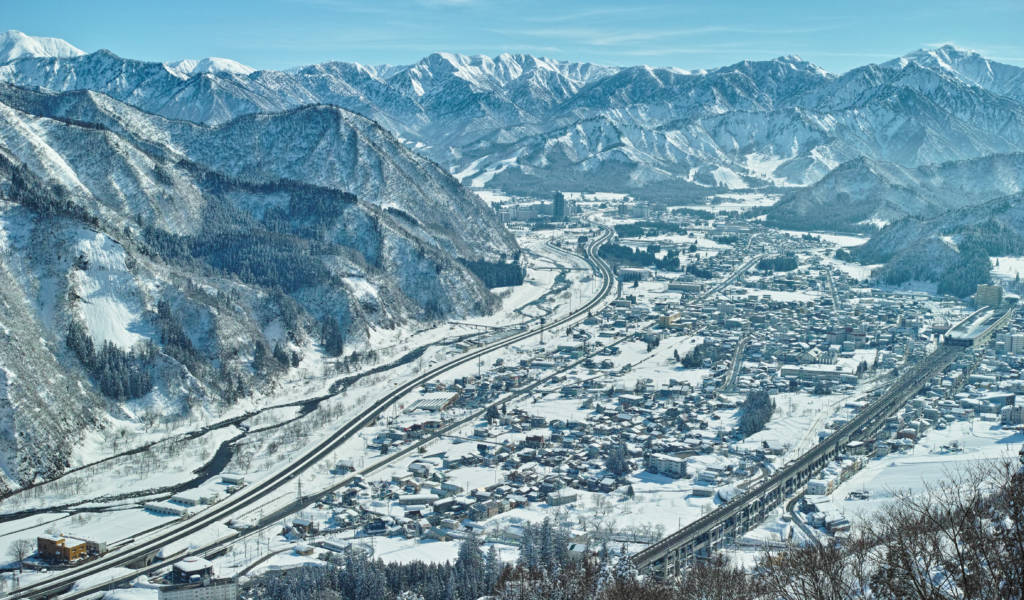 Everything about the Jōetsu Shinkansen

The Jōetsu Shinkansen connects Tokyo with Niigata, on the Sea of Japan coast — it’s one of only a few Shinkansen routes that cross the breadth of Japan (as opposed to the length of it). It’s most famous for being the route that takes you to ski resort Gala Yuzawa, where you can pretty much exit the station and be right on the slopes; other stops along the way are jumping off points for hot springs and outdoor adventures.

Jōetsu is the name for the southern region of Niigata prefecture, which is actually served by the Hokuriku Shinkansen. The Jōetsu Shinkansen travels through Saitama and Gunma prefectures en route to Niigata (the city, which is the capital of the prefecture of the same name). Yes, all of this is a bit confusing…

Highlights along the Jōetsu Shinkansen

Some popular destinations accessed via the Jōetsu Shinkansen include:

Questions about riding the Shinkansen? Check out our Shinkansen mega guide full of everything you need to know.

Highlights along the route

Since the Jōetsu Shinkansen crosses Japan’s mountainous spine, there are many tunnels along the route. The longest, the Dai-Shimizu Tunnel, is 22 km-long, on the border of Gunma and Niigata prefectures. Until the completion of the Seikan Tunnel between Aomori and Hokkaidō, in 1988, it was the world’s longest railway tunnel (a title currently held by Gotthard Base Tunnel in the Swiss Alps).

It is the older Shimizu Tunnel (completed in 1931) that appears in Yasunori Kawabata’s famous novel, Snow Country. But the effect of emerging from the Dai-Shimizu Tunnel in winter is similar to that described in the novel’s opening sequence — of entering “snow country” and a landscape blanketed in white.

Services on the Jōetsu Shinkansen

The Jōetsu Shinkansen has two services: Toki, which does the whole journey from Tokyo to Niigata; and Tanigawa, which goes only as far as Echigo-Yuzawa (and Gala Yuzawa during ski season). Only Tanigawa trains go to Gala Yuzawa.

Good to know: The Jōetsu Shinkansen shares tracks with the Hokuriku Shinkansen until Takasaki.

Toki is the most common service, running several times an hour in the morning and the evening and once an hour during the afternoon. It’s a little tricky because it runs like an express train, but an irregular one: some Toki services make more stops than others. For example, the fastest service stops only at Ōmiya en route to Niigata, doing the journey in just 90 minutes. Another might make six stops and reach Niigata in 2 hours.

So, in other words, you do need to make sure you get on a train that stops where you want to go. This won’t be a problem if you are buying a ticket for a specific journey; but if you’re using a rail pass without reserving seats, you should double check before boarding.

Fortunately, most of the more popular stops for travelers, like Jōmō-Kōgen and Echigo-Yuzawa, are common Toki stops.

Unreserved seats? Usually cars 1–3 (at the rear of the train actually, for Niigata-bound trains), with the caveat that JR can switch these up at whim.

Green or GranClass cars? One of each, at the front of the train for Niigata-bound trains.

Tanigawa trains make all stops between Tokyo and Echigo-Yuzawa (and Gala Yuzawa during ski season). There are about 12 trains daily. Of course, many Toki trains can take you to the same stops that Tanigawa trains do — just not all of them.

Unreserved seats? Usually cars 1–7 — and sometimes all of them save for the Green and GranClass cars — are unreserved on the Tanigawa service (though the same caveat applies).

Green or GranClass cars? One of each, at the front of the train for trains bound for Echigo-Yuzawa.

The Jōetsu Shinkansen is operated wholly by JR East, similar to the Tōhoku Shinkansen and the Hokkaidō Shinkansen. Seat reservations can be made at the same time as ticket purchase.

For more information on how to score deals on JR East tickets — including current promotions — and book package tours, check out our guide to getting discounted JR East tickets.

Bringing luggage on the Jōetsu Shinkansen

Fortunately the new Shinkansen luggage restrictions do not apply to the Jōetsu Shinkansen. So advanced reservations are not required for bringing large luggage on the train.

What about ski and snowboarding equipment?

There are no rules about bringing sporting equipment on the Shinkansen. But you are limited by what can reasonably fit. Skis will fit on the overhead racks, but not if everyone else has got stuff up there too (and a snowboard in a padded bag is a bit much). If you’re able to choose your seats, it makes sense to go with the last seats in the carriage — so you can take advantage of the (narrow) space behind the seats for your stuff.

What rail passes are good for the Jōetsu Shinkansen?

In addition to the countrywide Japan Rail Pass, the following rail passes cover some or all travel along the Jōetsu Shinkansen:

All of these passes are offered by JR East; for more details, see our guide to JR East regional rail passes.

Good to know: The Tokyo Wide Pass, the JR East Nagano & Niigata Area Pass, and the JR East Tōhoku Area Pass are among the rail passes that foreign residents can use.

Major stations at a glance

Prices were correct as of December 1, and are based on regular season travel. Children aged 6–11 ride for half-price.

Takasaki is the largest city in Gunma prefecture and a major transport hub; you can transfer here for the Hokuriku Shinkansen and about a dozen other regional rail lines. The city is most well known for two things: a huge (40+ meters-tall!) statue of the bodhisatva of compassion in white, called Byakue Kannon (White-Robed Kannon); and daruma, those iconic one-eyed, red papier-mâché dolls (you set a goal or make a wish and if it comes true, you fill the other eye in). Takasaki’s signature ekiben — boxed meals meant to be eaten on the Shinkansen — is packaged in a daruma-shaped container.

Takasaki is a gateway to some of Gunma’s most excellent onsen: Ikaho and Kusatsu. To reach Ikaho Onsen — known for its rusty red waters — take a Jōetsu or Agatsuma line train to Shibukawa. The journey takes 30 minutes on a regular train (¥420) or just under 20 minutes on a pricier limited express train (¥1,470). From Shibukawa Station, buses run frequently to Ikaho (a 20 minute journey that costs ¥580).

Kusatsu — one of Japan’s most famous onsen towns — is a little bit further. You need to stay on the Agatsuma line past Shibukawa to Naganohara-Kusatsuguchi: 90 minutes on the regular train (¥1,170) or an hour on the limited express (¥2,650). Then it’s the same deal: pick up one of the frequent buses from the station for the 20 minute (¥710) ride into town.

Kusatsu Onsen can also be reached by bus from Karuizawa, a stop on the Hokuriku Shinkansen.

Jōmō-Kōgen Station is located in Minakami, an area in Gunma prefecture known for onsen as well as adventure sports like canyoning and rafting. Also nearby is Mount Tanigawa (Tanigawadake), one of Japan’s “100 Famous Mountains.” It’s popular with hikers in the green season and leaf peepers in autumn (there’s a ropeway). In winter, a small ski resort, Tanigawadake Tenjindaira, opens on the mountain.

There are no train connections at Jōmō-Kōgen. If you’ve booked a night at one of Minakami’s onsen resorts, there is probably a free resort shuttle that you can take advantage of. Public buses, meanwhile, run approximately once an hour into central Minakami (30 mins; ¥630); some buses continue on to the Tanigawadake Ropeway (50 mins; ¥1,250).

Yuzawa is an onsen resort town just over the border in Niigata prefecture. It is well known as the setting for the novel Snow Country by Nobel prize-winning author Yasunori Kawabata. There are hot springs all around town, in foot baths (free), public bathhouses, and hotels.

Inside Echigo-Yuzawa Station is a complex called Ponshukan, which has a sake tasting bar — Niigata is famous for sake; a bathhouse where you can bathe in sake spiked waters; and a shop for picking up souvenir bottles.

Yuzawa is also well known for skiing and snow sports, and there are several resorts nearby. Gala Yuzawa is the most convenient (more on that below). Naeba is another popular choice. Buses travel there from Echigo-Yuzawa Station in 50 minutes (¥670). Or if you are staying at the Naeba Prince Hotel you can make use of the hotel’s free shuttle bus.

GALA Yuzawa is the ski resort where you can famously ski-in-ski-out from a Shinkansen station. During the ski season — usually from mid-December to early May — the Jōetsu Shinkansen stops at Gala Yuzawa Station at the base of the resort. From here, you can disembark and head right to the slopes. It’s the easiest possible ski or snowboard day trip from Tokyo.

Want more easy ski trip ideas? Check out our guide to hitting the slopes near Tokyo.

Niigata City is the capital of Niigata prefecture and also a port city on the Sea of Japan coast. Though it has plenty of city amenities, it doesn’t really have any sights. Hakusan Park, on the Shinano River, is nice for a stroll (but is about a 10-minute bus ride from the train station). Niigata Station also has a Ponshukan with a sake tasting bar.

From Niigata Station you can continue on to the following:

From Niigata Port, ferries travel to Sado Island. You can also catch overnight ferries to Otaru, on Hokkaidō.

What trains run on the Jōetsu Shinkansen?

Currently both the 10-car E2 (1997–) series and the next generation 12-car E7 (2014–) series run on the Jōetsu Shinkansen; however, by the end of 2022, the whole fleet will be upgraded to E7 (which has a bright blue nose and gold trim). E7 trains have GranClass in addition to Green Car class and ordinary cars.

E7 series trains have power outlets at every seat.

Is there cart service on the Jōetsu Shinkansen?

How fast does the Jōetsu Shinkansen travel?

Currently the Jōetsu Shinkansen travels as fast as 240km/hr. As part of the line’s upgrade, it will reach speeds of up to 275km/hr by spring 2023.

When did the Jōetsu Shinkansen open?

The route was completed in 1982, making it one of the oldest. (And the first to not travel along Japan’s more developed Pacific coast).

Are any extensions planned?

None that have been announced.

What does Toki mean? Tanigawa?

Toki is the Japanese name for the crested ibis, a critically endangered bird native to Niigata. Previously recorded as “extinct in the wild” there is now a small wild population on Sado Island (as well as a conservation center).

While we do our best to ensure it’s correct, information is subject to change at any time.

Written by: Rebecca Milner
Filed under: Transport
Tags:
Sharing
Questions or comments about this article?
Start a thread on our community forum
Ask our local experts about Tokyo