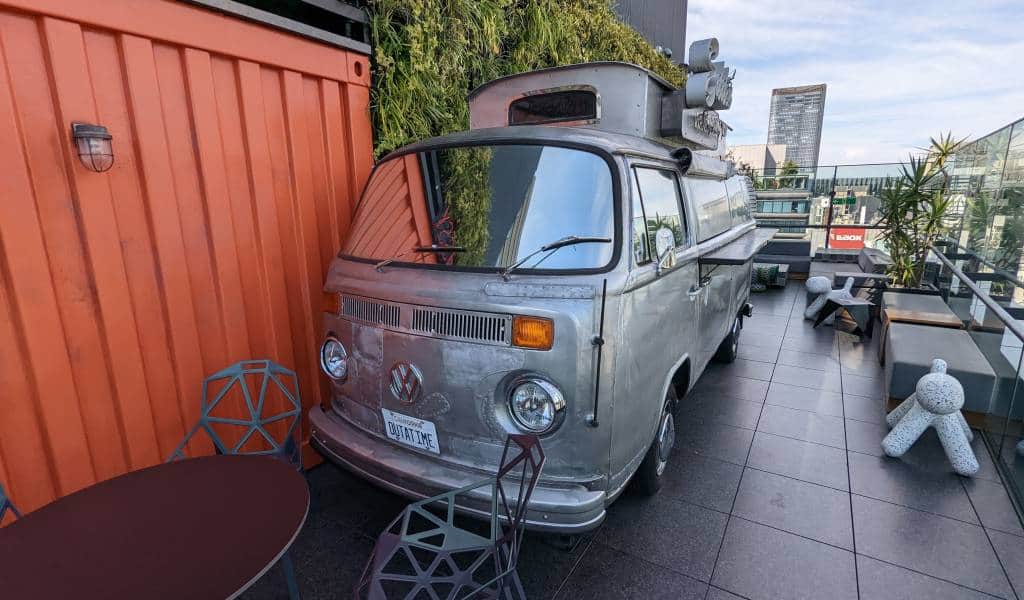 Aloft Tokyo Ginza is a hotel that aims to blend music, art, and design — and it does it pretty well. Its colorful aesthetic gets young travelers in the door and the rooftop, bar, and altogether lively atmosphere make them stay. There is the risk of sensory overload, but this shouldn’t be a problem for those who thrive on dynamic, creative energy. 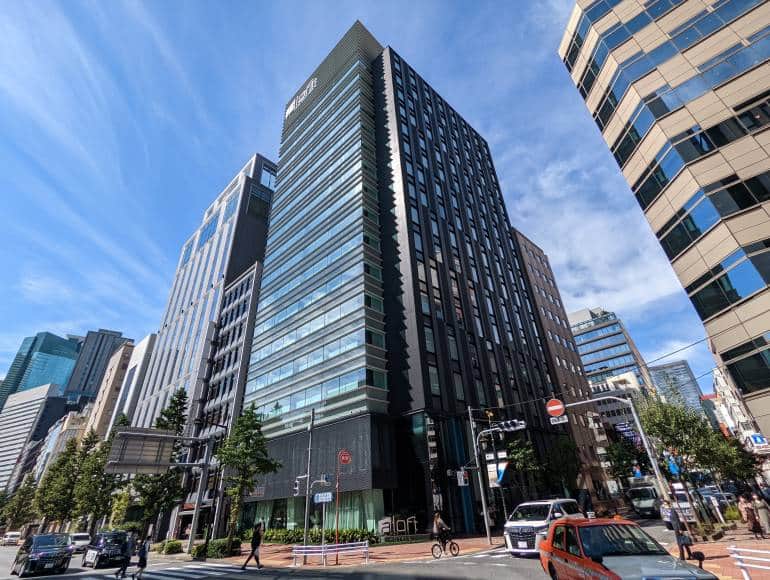 The hotel is lively and vibrant. It has many unique art pieces from well-known designers and a stand-out color theme. At night, it really shines — quite literally — when the facade is lit up with LED lights. The color changes depending on the season.

There is a 24-hour gym, restaurant, rooftop area, and bar (serving drinks and food from 3 p.m. to midnight) with a pool table and monthly events. Your hotel keycard gives you access to your floor without the need to press a button in the elevator.

There are quite a few places to sit down and relax. If you want some fresh air (and it isn’t raining), you can lounge on Aloft’s rooftop from noon. It isn’t super spacious — it has 28 seats and a vintage Volkswagen van that fills most of the space, but it still has a cool vibe and a killer view.

From 6 p.m. on weekdays and 3 p.m. on weekends, the rooftop turns into Roof Dogs, a cafe serving hot dogs, burgers, fries, and more American classics. Beer is around ¥950. It’s open throughout the year, but the food service may close during the winter months.

As for other spaces to work or chat in, the reception area can be used as a lounge and has chairs and a large table with sockets. The bar is also free to work in during the day, but may get loud and busy in the evenings.

With large, wide windows, the rooms at Aloft get plenty of light. There isn’t much of an entranceway, but most of the space is spent in the bedroom. Here you’ll find a comfortable corner sofa and table instead of a desk, but there are still plenty of sockets. In the rooms that face the main street, there is a faint, almost indistinguishable sound of cars.

The bathrooms have a separate toilet and shower (bonus points) with both a waterfall shower and regular shower head — the only bathtubs are in the suites.

There are two types of rooms at Aloft: a standard size room (23 square meters) and a larger, more generous size (27 square meters). This is reasonable for Tokyo, and the minimalist layout and design accentuates the space.

The beds use Simmons mattresses and the pillows are all one type, but other variations are available at the reception. While there is no room service, you can bring things in and place them in the refrigerator. If you are looking to take a nap during the day, the air conditioner is quiet and there are black out curtains.

As you are in the center of Ginza, there’s not much in the way of sights — you’ll either be facing the main road or other buildings.

Currently, the hotel is offering a half-buffet breakfast — cooked food made to order with drinks and other food available from a buffet — but this may change in the near future to a complete buffet.

Breakfast is served in the restaurant (The Warehouse), which has a giant vintage Harley Davidson in the middle of the floor, exposed piping, and a beautiful mural by British artist Hush.

Their hot food options include a basic bacon bagel with soup, a selection of egg dishes, and a rice ball set. It took some time coming out from the kitchen. The buffet offers fresh juice, oat milk, muesli, cereal, dried fruits and nuts, as well as savory pastries, donuts, muffins, and fruit.

The standalone price is steep at ¥3,630, especially for the current service they are offering, although when included in your room, it works out at around ¥2,965. Note that the hotel does allow you to bring in your own food, and there is a Lawson convenience store across the road.

How is the location?

The location is great for exploring the east of Tokyo on foot as well as via public transport. You are right in the middle of Ginza and you are able to walk to Hibiya Park in around 10 minutes and the Imperial Palace in 20. It is also surrounded by subway stations, which is convenient, but may be a little annoying if you have a Japan Rail Pass.

The closest stations are:

The closest JR stations are Shimbashi Station and Yūrakuchō Station — both around a 10-minute walk away.

Ginza is an upscale area that is known for its designer shops, art galleries, high-class restaurants, and plenty of other things to do. While, you won’t get to see the nitty gritty Tokyo, there are still plenty of bars when the lights go out — just expect to pay a little bit extra than you would anywhere else in Tokyo. If you take a short 10-minute walk to the Shinbashi area, you will find a livelier atmosphere with cheaper food.

Apart from the Lawson opposite, there are several places to eat nearby. Though, be warned, some of these come with a high price tag such as famous teppanyaki joint Ginza Ukai Tei. On the cheaper end, there is trusty Ippudo ramen, reasonably priced Kobe beef restaurant Gyūan, and row upon row of sushi shops — we recommend Sushi Iwa and Sushi Aoki (takeout from ¥3,500).

While there are some rooms for families (mainly the suites) and the ability to have a cot in some rooms, this hotel is predominantly for the younger crowd. The bar on the first floor and the rooftop might mean some quite rambunctious nights.

The hotel is in the process of providing a more sustainable stay, but so far, they have:

If you don’t want to shell out on a whisky at the bar, the hotel also has its own mini shop and stocks reasonably priced alcohol. There is also the Lawson convenience store across the street. Don’t feel guilty; you are allowed to bring in outside food and drink.

To save money, join the Marriot Bonvoy Membership Club and get exclusive rates — it’s free, so you don’t have anything to lose.