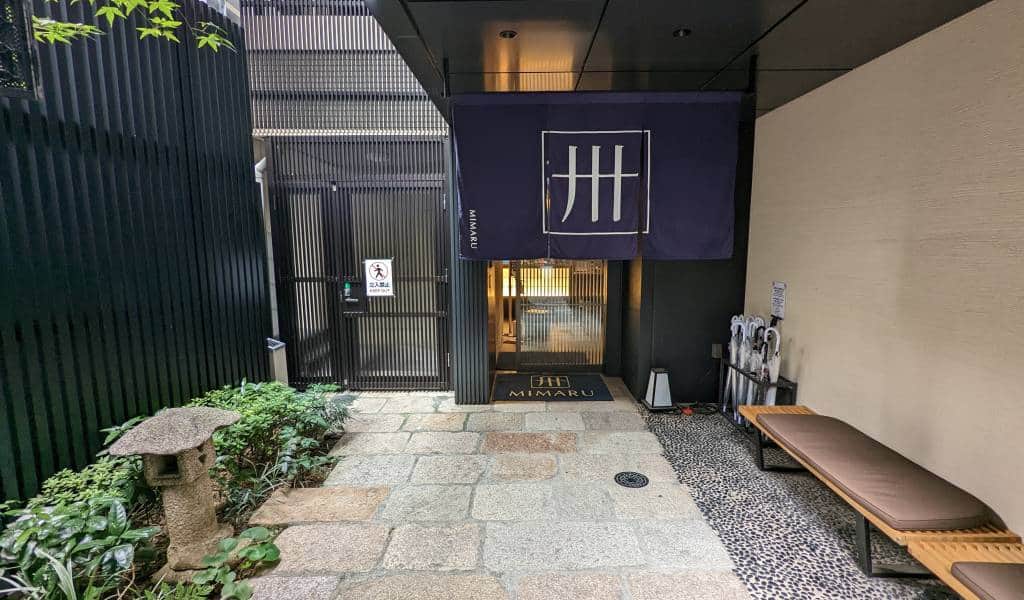 Mimaru is a spacious apartment hotel in Akasaka that is popular with families.

The hotel is modern with a minimalist Japanese aesthetic. Despite being right on the busy Akasaka Dōri thoroughfare, the main entrance is to the side of the building, so it feels separated from the hustle and bustle of Akasaka. The hotel has international staff too, so it feels a little different to the average Japanese business hotel.

Since it’s an apartment hotel, most of the facilities are in the rooms rather than shared. However, there are coin operated laundry facilities. There is also a roof-top terrace that is open depending on the weather.

There is an Eastern European/Russian themed cafe on the ground floor which has some outside tables. It’s not so much a part of the hotel though. If you want to hang out, you’ll have to order something.

You can also use the rooftop terrace, but this is completely unsheltered, so this would be unusable during the heat of summer and during the cold of winter.

The rooms are quite spacious for Tokyo. Standard rooms come in two configurations — Japanese style with a tatami area, and Western style with regular sofas. Both have two semi-double beds. All rooms come with a kitchenette which includes a good sized refrigerator, microwave oven, a hot plate, and a sink.

Standard rooms are all 40 square meters. Additionally they have some larger apartments with views on the 11th and 12th floors which are ideal for larger family groups.

Standard rooms sleep up to four adults, but with smaller children you might be able to squeeze in 5.

Unlike a lot of hotels, the rooms are a spacious refuge from the city. They’re a comfortable place to be and to hang out.

Mimaru Akasaka is located right on Akasaka Dōri, slightly outside the busiest part of Akasaka.

From Haneda Airport, take the Monorail to Hamamatsucho, then switch to Daimon Station and jump on the Oedo Line to Roppongi Station, then walk the 10 minutes too your hotel or take a minimum fare taxi if you have lots of luggage.

Akasaka and Roppongi are two of Tokyo’s nightlife districts, although Mimaru is well separated from the rowdy aspects of both. In these areas, you can find everything from cheap and cheery izakaya through to high end eateries. The neighborhood can be seedy in parts, but as long as you don’t follow the touts, you’ll be fine.

Akasaka is packed with good places to eat and drink. In the area you can find whatever cuisine you fancy. Wandering along Akasaka Dōri and checking out the many eateries is one option, or you can try Akasaka Sacas, which is full of restaurants.

There are great museums, high end shopping centers, and peaceful shrines all within easy walking distance.

As mentioned, Mimaru Akasaka is ideal for families. Also, with the extra space, it’s great for those who need a comfortable refuge from the crowded streets of Tokyo.