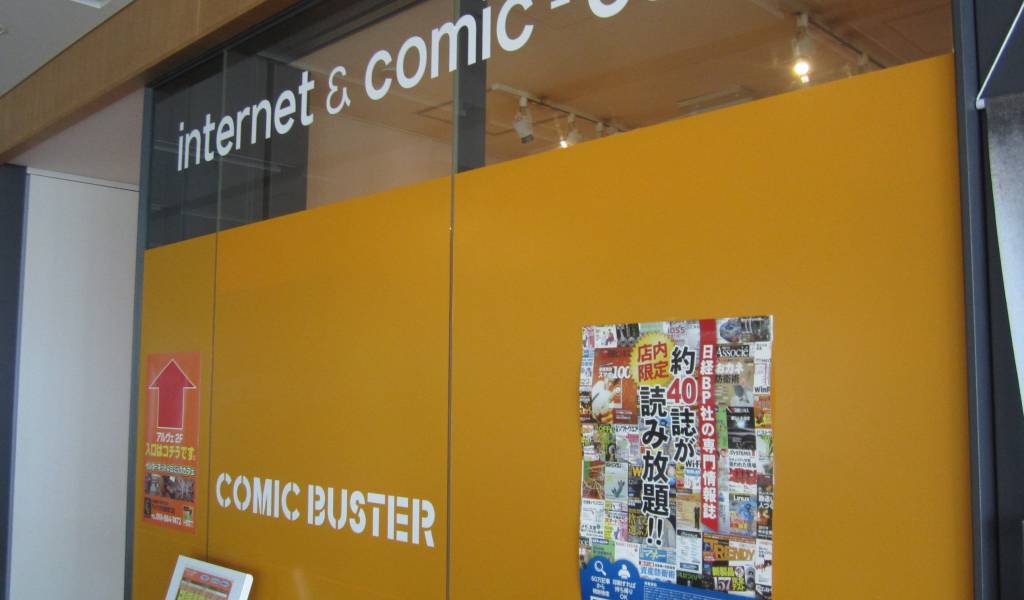 Japan’s manga–plus–internet cafés are more than just a place to surf the web, play video games, and read comics. They can be a viable alternative to sleeping at a hotel or on the street when you miss the last train. For some Japanese people, they’re even a kind of temporary home when times are tough. Manga cafes are typically stocked with everything you would need to, well, survive. Each booth has a computer and a reclining chair that can be almost comfortable to sleep in. More on that later. Meantime here’s what to expect, what to do, and how to find them.

What is a manga cafe?

The term Manga Kissa with “kissa” short for kissaten or cafe is said to have originated in Nagoya. It started when a cafe owner wanted to attract more customers so he offered a selection of free manga alongside his menu. While he was able to attract more customers, they normally just ordered one drink and stayed for hours. Learning from his experience, other cafes improved upon this new model by adding a time limit to prevent customers from overstaying. From that time manga cafes started to increase all over Japan.

Nowadays, manga cafes have evolved into establishments that are open 24 hours and are places where visitors can come to either read manga (like the name suggests), browse the internet, or in some cases spend the night. There are even some manga cafes that offer rooms big enough to entertain groups that come with video game rentals and darts. The terms manga cafe and internet cafe are treated interchangeably.

How do I find a manga cafe?

It’s not difficult to find a manga cafe in Tokyo. There are usually a couple (at least) dotted around train stations, with signboards or employees pointing the way (see the man in the red jacket below). The names vary from Internet Cafe (インターネットカフェ), Manga Kissa (マンガ喫茶), and even Media Cafe (メディアカフェ). Sometimes you’ll see combinations or abbreviations of these titles.

When you’ve found a manga cafe, you just walk in and present yourself at the front desk. You may be asked to “register” at some cafes (this happened to us in Osaka) to create a membership card of sorts. Don’t expect the staff to be fluent in English but you can usually get by with a few words of Japanese and pointing at what you want (politely). Once you’ve picked a payment package, they will show you to your booth and you’re free to nap, watch Netflix or read Tokyo Cheapo to your heart’s content. In some cases, manga cafes offer completely private rooms although this normally costs a bit more.

What can I do at manga cafe?

Nearly every manga cafe has unlimited soft drinks, DVDs that you can watch in your booth, PCs with wifi (obviously), and of course, manga (duh). Additionally, most have showers, a “changing area”, and a padded mat or sofa option (instead of the regular reclining chairs) which can come in handy if you’ve just hopped off a night bus.

Other manga cafes even have VR, game consoles for rent, karaoke, and vending machines. A few cut the power and internet between midnight and 5 am, to allow folks to get some shuteye, though this is becoming a bit outmoded.

Some cafes will let you enter and exit the store as you please (though keep in mind some won’t let you leave without paying again, so check before you get settled).

Be warned: you might detect a somewhat seedy vibe at some manga cafes. For a more in-depth look at what you can expect all–around, give this honest review of an internet cafe a read.

How much does staying at a manga cafe cost?

If you anticipate the need for a manga cafe within the next week or so, the majority take reservations in advance either through their website, downloading their app (if available), or by phoning the branch directly. You might even be able to score a discount or two.

Where can I find cheap manga cafes in Tokyo?

There are hundreds and hundreds of manga cafe chains in Tokyo, and we can’t include them all (yet). What follows is a non–exhaustive list of some of the best options for a low–cost cyber stay. You’ll find them plugged into the map at the bottom of the page for ease of navigation.

A chain of manga cafes with a frog as their mascot. Simple, straightforward use with reasonable rates and 24–hour access. You’ll need to pay ¥110 and register with some ID if it’s your first time. They’ve got branches in all of the main areas of Tokyo (and a few in outlying areas too). You’ll find a selection on the map below. 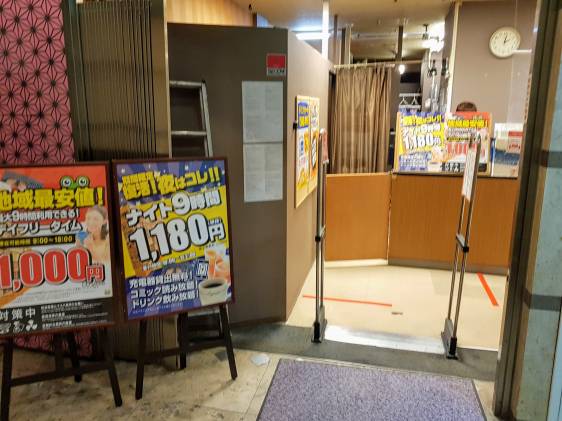 Akihabara–based Nagomi advertises itself as a traditional Japanese-style internet cafe. You can rent samue (comfy traditional old-man clothes), and there is a distinct feeling of faux Kyoto about the place. You can rent hair irons and they serve breakfast sets. There’s also an option to reserve a net booth, which means that all in all, it feels more like a hotel than a manga cafe. Prices start at ¥700 per hour on weekdays and ¥800 per hour on weekends and holidays and you’ll need some ID. 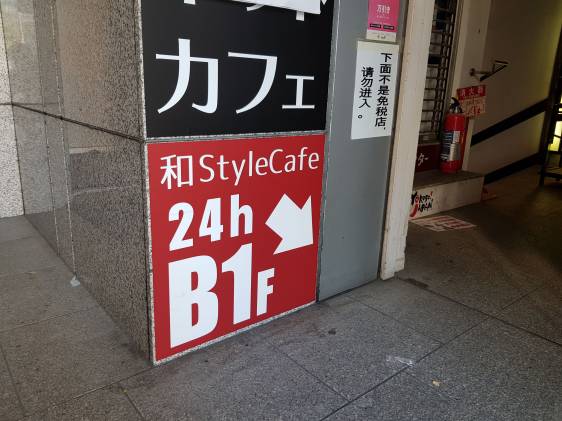 You’ll find this brightly-branded chain across the country, they have about 29 manga cafes spread all throughout Japan with 4 in Tokyo. You can generally rent a private booth or use a computer in a shared area.

A cheap chain of net cafes, about as widely found as Takarajima 24 (see below). You’ll spot multiple branches around the big train stations (Shibuya, Shinjuku, and so on), and solitary branches in outlying areas too. Some branches offer extra services–for example, ladies can have their nails done (their stereotyping, not ours).

Part of the Moopa! chain of internet and manga cafes, Comica is a good option for those looking for a net cafe in the Ebisu area. 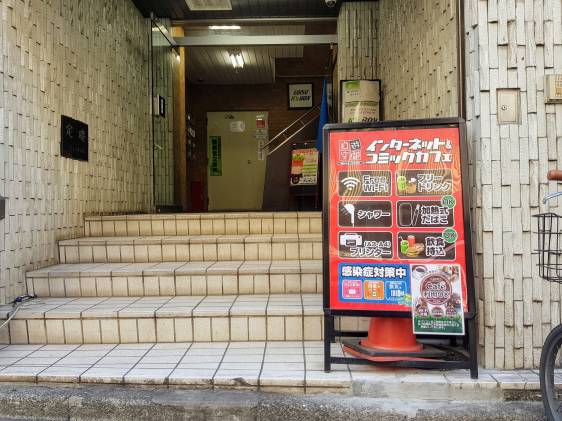 A 24-hour net cafe chain that is (as you’ll see from the map), rather prolific in Tokyo. They boast a variety of different room types, VR games, and even karaoke (branch dependent). They’re a little pricier than some other manga cafes with hourly rates of ¥500. Another thing to note is that they don’t accept anyone under the age of 18.

No, that’s not a typo. Hailey’5 Cafe is a more upscale, modern take on the traditional manga cafe. Generally, the facilities feel and look a lot newer than the previous ones mentioned although it isn’t as widespread with only 5 branches (4 in Tokyo and 1 in Kyoto). To stay here, visitors are required to pay an initial registration fee of ¥330 and prices starting at ¥660.

Similar to Takarajima24 and Hailey’5 Cafe, DiCE offers about the same quality of amenities and services with branches mainly in the northern and southern parts of Tokyo. While most of their locations in Tokyo require a membership fee, some of their branches in Kanagawa (that are relatively close to Tokyo like Kawasaki) don’t.

Out of all the internet cafes in Tokyo, Kaikatsu Club has one of the widest selections of amenities. Some of their branches offer a breakfast buffet, billiards, darts, and karaoke to name a few. To add to that, if you find yourself in need to get some work done Kaikatsu Club has rooms for rent that come equipped with an extra monitor.

Did we miss one of your favorite Tokyo manga cafes that you think we should include? Post in the comments below.

This article was updated by Heidi Sarol in June 2022.

Manga cafes in Tokyo:
Akihabara Ebisu Ikebukuro Shibuya Shinjuku
Written by: Grace Buchele Mineta
Filed under: Places to stay | Things to do
Tags:
Sharing
Questions or comments about this article?
Start a thread on our community forum
Ask our local experts about Tokyo