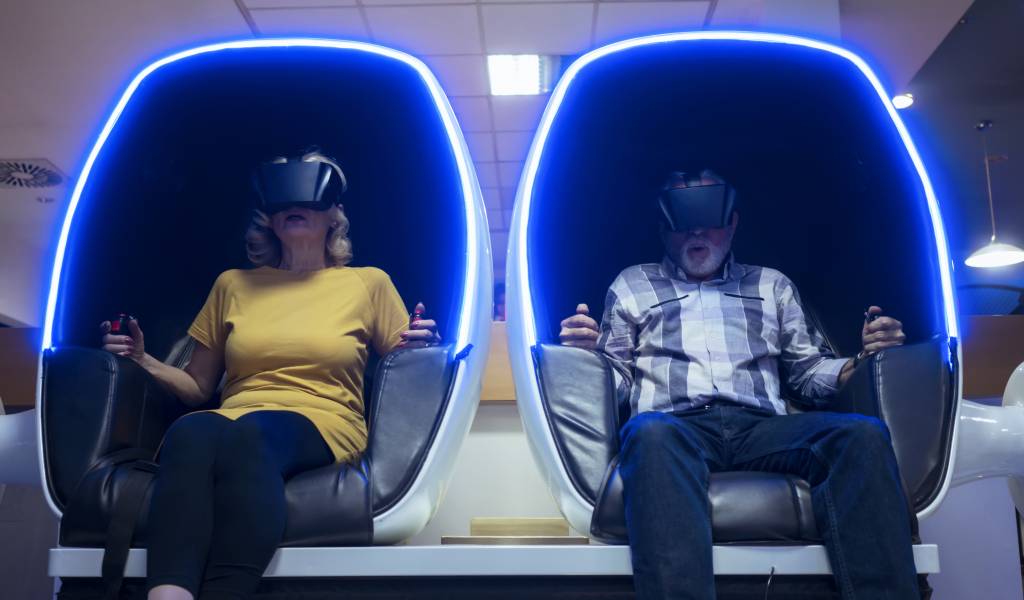 Tokyo doesn’t always live up to its reputation as a high-tech metropolis, but when it comes to experiencing virtual reality (VR), Tokyo is right at the forefront. Interested in seeing what all the fuss is about? There are plenty of options!

Housed on the 6th floor of Sega Akihabara Building 3, this small VR area is your most straightforward option.

Its headline game is Mortal Blitz, a solo, first-person shooter. I won’t spoil any of the details, but the game itself is a pretty immersive shoot-the-aliens-and-get-to-the-chopper affair. You’re jacked in with a backpack and a rifle, so no overhead wires, but the game is quite good at funneling you into the right places. I took some time to tool around peering over ledges, exploring the boundaries of the environment and staring at my floating VR hands. I still got a decent rank, so I’m not sure how the game is scored.

The website gives a time of 30 minutes, which I’d say is very ambitious. I was in and out in closer to 20. That’s 5 or so minutes prep and 10-15 in-game. I’ll chalk that up to getting a much shorter explanation on how to play, since my Japanese isn’t all too hot.

They also offer “Tower Tag”, a 2v2 arena-style shooter. This time you’re wired up via overhead cables, so you won’t be moving around much, but the game has some novel ways of overcoming that. Expect around 10 minutes of in-game action.

Other games include Tiger Knight and Western Cowboy, both of which involve sitting on a motorized saddle and haphazardly shooting aggressors with a bow and arrow or dual pistols, respectively.

It’s a simple fixed pricing system per person: ¥1,500 for Mortal Blitz, ¥1,000 for Tower Tag, ¥800 for Tiger Knight and Western Cowboy. I recommend pre-booking or arriving early, especially on weekends.

Joypolis, Sega’s high-tech theme park on Odaiba also offers VR opportunities. I was surprised to learn that Joypolis doesn’t actually have all that much VR content as such—just two attractions. The others, while pretty fun, are more like traditional rides with standard screens used in novel ways.

The “Zero Latency VR” room allows up to 6 players to play at once. It’s a wire-free setup, so it really is free roaming within the confines of the room.

For 2018, they’re running “Zombie Survival”, which takes around 15 minutes. It requires a booking, so you’ll only need to arrive 15 minutes before your allotted time, but that privilege comes with an additional price tag of ¥2,000 on top of whatever you paid to get into the park.

They also offer Tower Tag, which is available without a reservation. Expect to spend plenty of time waiting in line though. The waiting time for most rides hovers between one and two hours throughout the day.

There are two pricing systems in play at Joypolis. The first is an admission ticket, which allows you to pay an entry fee of ¥800, then pay additional fees for any rides you go on. This can be effective if you’re only interested in two or three rides, but less so if you plan on spending the day.

The second is a passport ticket, which effectively lets you try as many rides as you’d like. This gets cheaper as the day goes on. But be warned, odds are if you turn up too late you’ll spend all your time waiting for a single ride. There are quite a few discounts, especially for foreigners, so it’s worth checking the site to see if you qualify.

This family-friendly “dojo” blends immersive theater and VR, with performances and interactive “training” sessions in the ninja arts. A lot of attention has been paid to detail, and, the price reflects that, starting from ¥6,500. It’s worth saying that the VR game, which sees you cutting down virtual foes with your newfound ninja skills, is only a small part of the experience—so if you’re just looking for straight-up game time, this may not be for you. For more details, check out our full guide.

With VR Zone Shinjuku gone for good, Shibuya VR Park has taken over as the biggest fish in the pond. There are around eight different games available at any given time, mostly using a mix of Oculus, PlayStation VR and custom-built physical props.

The surprise highlight for me was Kaiji, “Steel Beam Crossing of Despair”, which sees you walking a narrow beam between two tall buildings. The game itself is pretty straightforward, but there are a couple of nasty tricks thrown in to play with your sense of equilibrium—making it a fun insight into how easily your brain can be tricked. Maybe give this one a miss if you’re afraid of heights. Aside from that, the simulated bungee jump, Jungle Coaster, Welcome to Panic Mansion and Salomon’s Carpet are all great fun

The strangest attraction by a considerable margin has to be Osomatsu-San VR, which sees you sharing a public bath with Japan’s most notorious (I double-checked, they definitely are) sextuplets. If you’ve not seen the show (or if you don’t speak much Japanese), many of the references will sail right past you. Just enjoy the opportunity to soak in some love from the six surprise sex-symbols. All nudity is strictly virtual (and heavily censored).

What Shibuya VR Park lacks in big-name games, it more than makes up for in price and simplicity of purchase. At 2,900 yen for 110 minutes, it’s less than half the price of the now defunct VR Zone in Shinjuku – and there’s a lot less waiting in line too.

Reservations aren’t required for any of the games, but it might be worth booking an entry ticket if you’re planning on visiting during weekends or evenings. Booking is free, and all you need to provide is your name, booking slot and email address. If you’d rather leave it to chance (as I did), you’re best off arriving 15 minutes ahead of time. I arrived for the opening slot and Friday and walked straight in. At an average of seven minutes per game, it’s very possible you’ll get to try every ride at least once if the place isn’t too busy.

If you’re just looking to try out VR in Tokyo, Sega in Akihabara and VR Park Shibuya are your best bets for both price and waiting time. Like any theme park, you’ll spend the vast majority of your time and money waiting in line at Joypolis, but there’s also a much greater diversity of things to do for more hardcore VR fans—especially if you want to play with a group of friends.

If you’re looking for a more unconventional experience, private VR pornography rooms have popped up throughout Tokyo. From what I’ve seen, prices blow the competition out of the water, starting from ¥2,000 for a couple of hours with a PC loaded with adult films and a VR headset. Presumably tissues and hand sanitizer are included…

For more tech-based fun in Tokyo, visit these spots to come up close and personal with robots.

Akihabara Odaiba Shinjuku
Written by: Felix Wilson
Filed under: Things to do
Tags:
Sharing
Questions or comments about this article?
Start a thread on our community forum
Ask our local experts about Tokyo