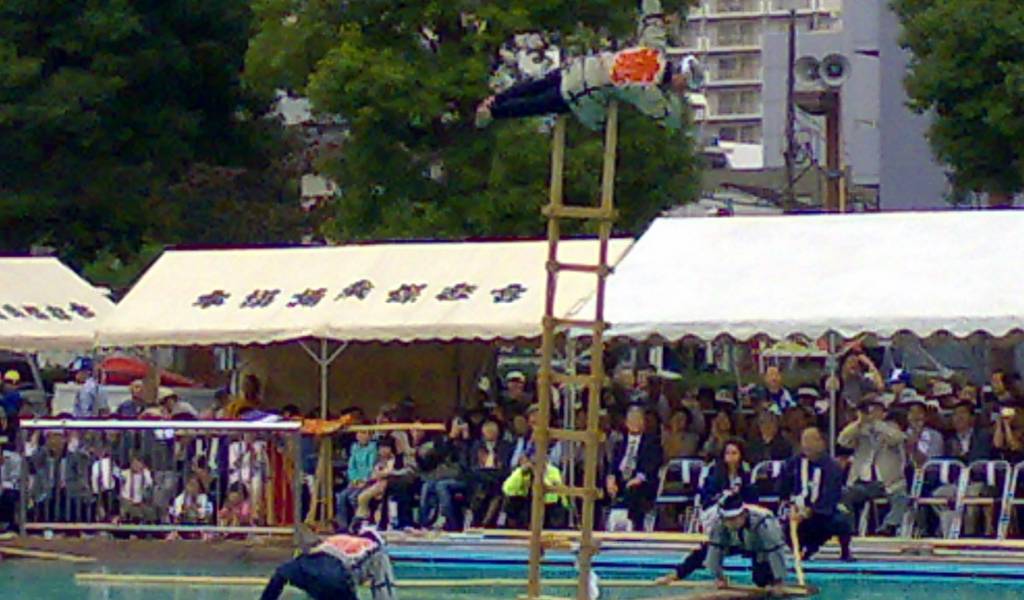 This weekend sees a spectacular range of autumn festivals in and around Tokyo starting with the Koto Ward Citizen’s Festival which takes place at Kiba Park.  As shown in the image above, the festival features a form of entertainment characteristic of old Edo known as “kakunori” in which acrobats balance on floating wooden beams attempting various feats of balance. More details in our events section.

On Saturday night at Enoshima Beach in the Shonan region of Kanagawa Prefecture the still and clear evening skies will be filled with an unseasonal fireworks festival – Fujisawa Enoshima Fireworks 2013. The closest station is Katase-Enoshima on the Odakyu Line and kick off is set for 6pm and will run for 45 minutes.

The events square at Yoyogi Park sees the return of the annual Tokyo Vegefood Festival. As the name suggests, it will not feature any meat – in fact this is a vegan food festival. 100 booths will be serving vegan (and animal) friendly food and drink over the two days of the festival.  The closest station is Harajuku/Meijijingunae on the JR Yamanote Line and Tokyo Metro Chiyoda and Fukutoshin Lines.

If you enjoy the many and varied pickles available in Japan, you will probably enjoy the Nihonbashi Ebisu-ko Bettara Market.  Based around Takarad Ebisu Shrine in Nihonbashi, this is a massive Japanese pickle market. The closest station is Kodenmacho on the Tokyo Metro HIbiya Line.