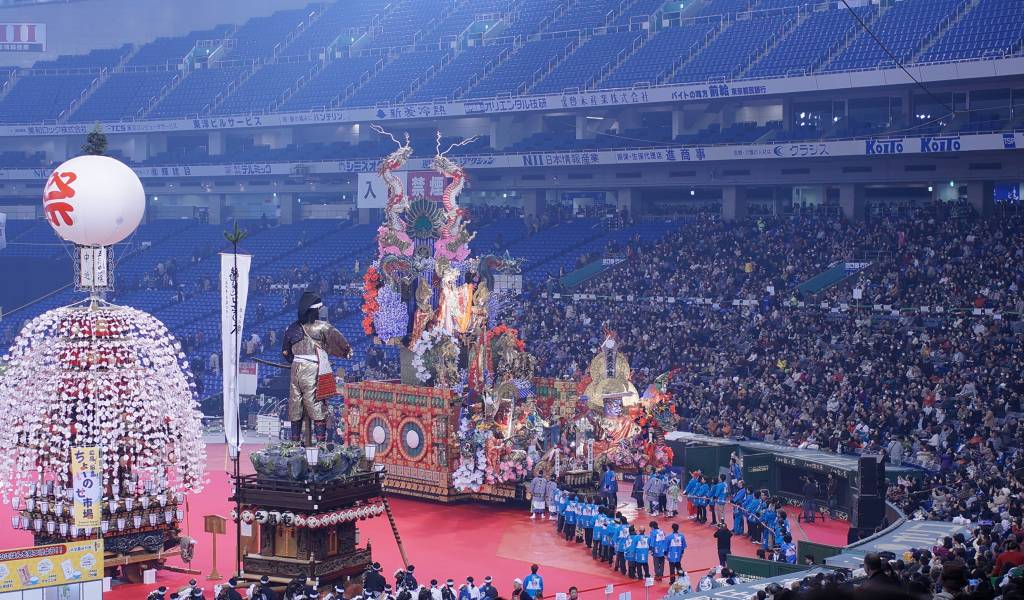 Furusato Matsuri Tokyo (Jan 7-15): Travel around Japan at a very cheapo price! The Furusato Matsuri offers a smorgasbord of regional cuisines hailing from the north’s Hokkaido to the south’s Okinawa. And don’t miss the chance to catch several renowned cultural festivals that will be recreated (like the famous Aomori Nebuta festival). All conveniently located under one roof—Tokyo Dome.

7 Lucky Gods Pilgrimage (early January): For the first 10 days on January, you can set off on a Seven Lucky Gods Pilgrimage—a tradition dating back to Tokyo’s Edo period to pray for blessings and wealth for the upcoming year. There are many different routes throughout Tokyo that you can take for visiting shrines of these lucky gods; however, it’s not an organized event, you’ll have to take on the adventure by yourself or with friend. But, hey, you never know what other wayfarers you’ll meet along the way.

Torigoe Shrine Tondoyaki (Jan 8): Did you deck your halls with boughs of holly—or other such New Year decorations? Don’t know what to do with said decorations now that the holidays are officially over? Head to Torigoe Shrine to have them burned in a ceremonial fire called tondoyaki. It’s claimed that if you get some of that smoke breeze on you from the fire, you’ll be set for good health in the upcoming year.

Japanese Antique Market (Jan 9): This monthly antique market is back which aims to educate people on Japanese culture and art, while creating an opportunity for locals to sell their antique goods. Great spot to practice your Japanese and/or pick up some souvenirs!

Anne Collier: Women with Cameras (Anonymous) (until Feb 19): Each of the 80 photographs presented in this unique exhibition contains an anonymous female subject in the act of either taking a photograph or holding camera equipment. Sourced over many years by New York artist Anne Collier from flea markets and online auction sites, the images in ‘Women With Cameras (Anonymous)’ date from the 1970s to the early 2000s. The exhibition takes place at the Rat Hole Gallery in Tokyo’s Omotesando neighborhood. Closed Mondays.

It’s a Sony (until Mar 31): The demolishing of the 50-year-old Sony Building in Ginza is turning out to be quite the celebration. The event will be split into two parts where you can enjoy a special exhibits about the company’s past, present, and future.

Midtown Ice Rink (Jan 5-Mar 5): The ice rink at Tokyo Midtown will be up and running starting this Thursday. It’s a fun and seasonal way to work off some of those holiday calories.