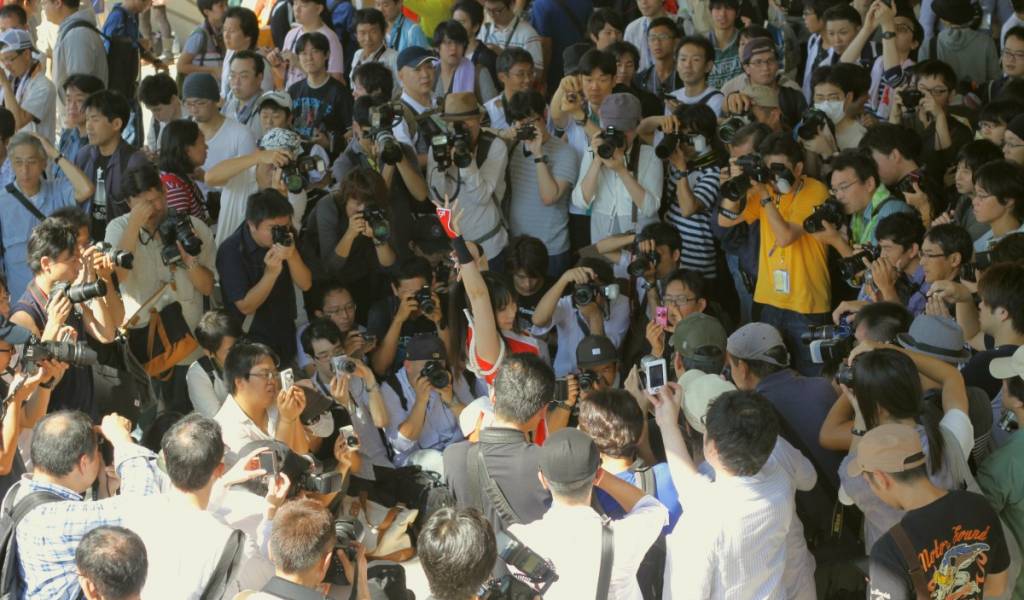 What to Expect at Tokyo Game Show

We got a press pass to this year’s Tokyo Game Show, and, although we’re no gaming site, we’re sure that at least some of you cheapos will be attending this event—so here’s a sneak peek so you know what to expect!

1. Significantly more booths and exhibitors than in 2014

With 480 exhibitors and 2009 booths that take up Halls 1-11 of Makuhari Messe (that’s all the exhibition halls they have!), this year’s Tokyo Game Show is the biggest yet. It seems like the organizers aim to keep getting bigger each year, as last year’s event featured 421 exhibitors and 1715 booths, and took up Halls 1-9 of the venue. The organizers want to give overseas exhibitors and indie game developers (many of which also happen to be from overseas) a chance to showcase their works—hence the increase in booths and exhibitors. Some Japanese universities also have booths to exhibit their students’ creations. We recommend not just checking out the large companies’ booths; that way, you’re supporting smaller game companies and students as well, and your support might just make all the difference.

And what do you do at the booths? In most cases, test-play games, of course! From smartphone games to console games, there are a lot to check out. Just a few examples of games that you can test-play are Project X Zone 2 and Jojo’s Bizarre Adventure: Eyes of Heaven, among others, at the Bandai Namco booth; Star Ocean: Integrity and Faithlessness at the Square Enix booth; Street Fighter V and a multi-player Biohazard (or Resident Evil to Western fans) game called Biohazard: Umbrella Corps at the Capcom booth; Star Wars Battlefront; and Ryu ga Gotoku Kiwami, a remastering of Ryu ga Gotoku (known as Yakuza in the West) at the Sega booth. We even tried an odd smartphone game called Oyaji Girly, in which you catch old men and make them cute. No kidding. There’s much, much more, so go visit TGS for yourself! (And go early if you want to test-play as many games as possible, as lines can get very long!)

But test-playing isn’t the only thing to do at the booths; a few don’t even have anything to test-play at all. Some booths also have stage events (which we’ll get to later) and activities. TGS, after all, is where companies make important announcements about their upcoming games, and product lineup. They also reveal trailers and teasers, interview the production staff of some games, and so on.

Some also have backdrops for photo ops, as well as other attractions. The Capcom booth, for example, has a Resident Evil-themed shooting range, and the DMM booth featured displays of upcoming Kantai Collection figures. Google is also one of the TGS exhibitors, and you can try some of its latest technologies, such as its Project Tango (a 3D motion-tracking device) tablet attached to a Nerf gun.

If you’re looking for event-exclusive merchandise, depending on the games or companies that you’re fond of, you might be disappointed. Unlike in previous events, wherein booths of large companies like Square Enix and Capcom featured both gaming content and merchandise, the merchandise booths have been moved to Halls 9-11, which require some walking from Halls 1-8 to get to. (The indie game booths are also in those 3 halls, so don’t forget to pay Halls 9-11 a visit!). It seems that there are fewer merchandise than last year; this writer recalls last year’s COSPA booth being bigger. Bandai Namco doesn’t even have a merchandise booth this time around, and, surprisingly, there weren’t any new or event-exclusive goods for popular franchises like Touken Ranbu and Kantai Collection. Love Livers should rejoice, though – there will be new merchandise to look forward to on the public days!

Aside from the large booths having their own lineup of programs (they have schedules posted in front of their booths), Hall 1 has an event stage. During the press day, the stage was used for industry-related talks and the Japan Game Awards, among others. On the public days, you can look forward to programs such as the announcement of winners for the amateur division of the Japan Game Awards, stage events featuring the cast of The Idolmaster and Persona, a charity auction, and more. While you don’t need to pay extra to see the stage events, some events have limited seating and thus require a numbered ticket, which staff usually distribute hours before the event.

A term that originated in the anime and manga fandoms, fan service refers to, well, anything that panders to fans, usually gratuitously (e.g. characters in sexy outfits). And at TGS, yes, the games are the focal point of the event, but sex sells, too. Many booths have women in sexy and/or skimpy outfits and costumes that are meant to draw attention to themselves. You’ll thus see photographers happily snapping away at the women; perhaps some of them even attend just for the promo girls. The Sony Xperia booth even had a bikini-clad woman relaxing in a transparent bathtub onstage while using an Xperia phone!

But hey, TGS also has its share of fan service for the ladies. Voltage Inc., a creator of romance apps (mainly dating games), promotes its games not only by letting you test-play them, but also by letting you live out any fantasies you might have had of being pampered by ikemen (handsome men). Perhaps the most normal photo op you can get there would be you standing next to an ikemen, but Voltage also has other gimmicks in store! You can be a singing idol’s number-one fan, thus winning his love. Or you can enter a room and be pampered or seduced by an ikemen. It’s an amusing, interesting spectacle, and even if you may never have had any such fantasies, you might want to visit Voltage’s booth for some laughs. (Photos are also allowed; maybe your friends might want to commemorate the occasion and have something new to tease you over!)

Aside from flyers and catalogs, some booths also give out freebies for test-playing the games. At the DMM booth, you can get special download codes for some of their games, as well as a chance to win some small Touken Ranbu merchandise (a fan and a screen cleaner). There’s also a freebie for trying out Street Fighter V, and you can get a button pin for playing Jojo’s Bizarre Adventure: Eyes of Heaven. If you ever wanted to get into a card game called Weiss Schwarz, one booth gave out a starter pack of 25 cards. And if you’re a fan of the idol-themed anime Wake Up, Girls!, know that you can get a free key chain featuring the main characters by downloading the Rakuten app marketplace app (available only on Android devices) and the sample version of the game Wake Up Girls!: Puzzle Angels. Other booths also have small freebies such as stickers—Amazon.jp gave out stickers of Danbooru, the popular cute cardboard robot. Our favorite freebies, though, come from the various design schools’ booths, where they give away cards with student-designed art that are pretty damn cool!

TGS is one of those events in which cosplaying is allowed. Since we attended the business day, the few cosplayers that we saw were paid to do so as promotion for the booths. The public days, however, should have a good number of cosplayers. There’s even going to be a stage event called Cosplay Collection Night @TGS, which will be held in Hall 1 on the 19th from 6:30 pm-8:00 pm. (TGS ends at 5:00 pm, but some stage events might go on beyond closing time.) You can watch both Japanese and overseas cosplayers—some of them being popular in their own communities—walk down the runway and perform.

But I’m not a gamer! Can I still enjoy TGS?

The answer is: yes, you can! This writer has played very few video games but enjoys TGS because she gets to familiarize herself with games and franchises that her friends keep talking about, and she finds the booths cool and interesting. Besides, some anime series that she watches were also based on video games (or got video game adaptations). Indeed, there is some overlap between some of the geekier aspects of Japanese pop culture.

Yet what if you aren’t into geek and/or Japanese pop culture? That might make enjoying TGS tough, so it’s up to you to decide if it’s worth attending out of curiosity. If you like photography, though, TGS has plenty of large booths that are pretty much sensory overload. They’re colorful, showy, and sometimes even loud. The cosplayers and scale figures (the Kantai Collection figures, for example) should also be worth taking photos of.