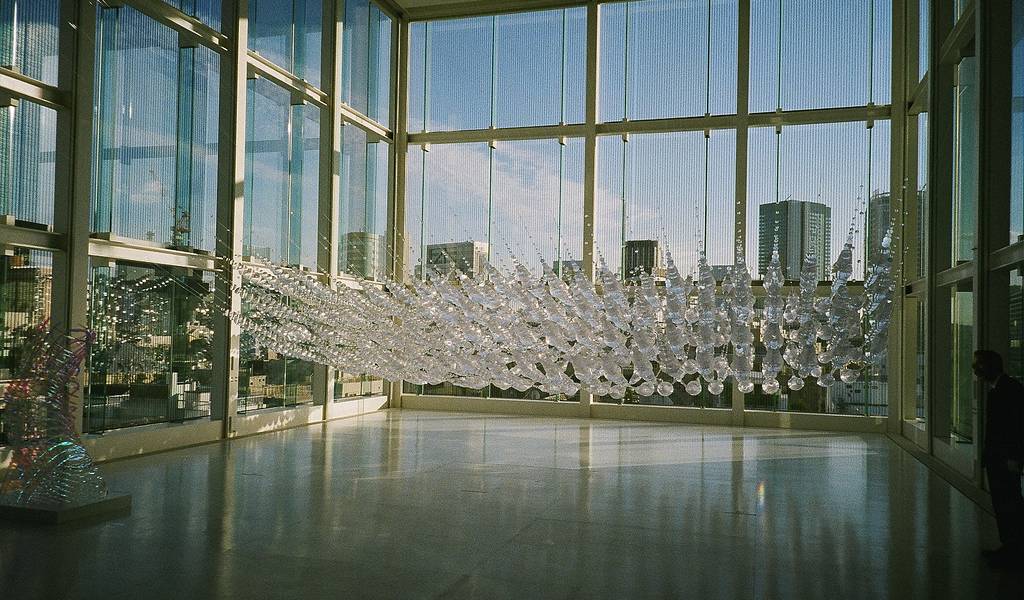 Tokyo’s art scene is impressive, with brilliant galleries littered across the city all showing off cutting-edge work from some of Japan and the world’s most exciting artists. Best of all, many won’t cost you a penny. Check out our pick of the 10 best.

Hidden away in suburban Yanaka, just north of Ueno Park, Scai the Bathhouse is one of the most well-respected, most consistently exciting art galleries in all of Tokyo. Since opening in 1993, the gallery has acted as an incubator for artistic talent from Japan and the world, becoming a central pillar propping up the Japanese avant-garde.

In a former life, the gallery was a community bathhouse, where two centuries of locals would come to soak and unwind. Though renovated, Scai the Bathhouse retains many of its original features, including its original tiled roof, a curved entrance wall (designed to shield bathers from view) and old lockers. The gallery gracefully, innocuously blends into its surroundings, though the art displayed here is anything but benign.

Scai the Bathhouse displays a mix of established and emerging artists, in the past including the likes of Tadanori Yokoo, Janish Kapoor, Kohei Nawa and Jeppe Hein. An hour or two in this light, airy and open space rarely disappoints.

Ota Fine Arts is an intimate gallery located just behind Roppongi’s main road, which, since 1994, has been another of Tokyo’s bastions of cutting-edge contemporary art.

This gallery was instrumental in the rise of Yayoi Kusama, the now internationally lauded multimedia Japanese artist and is always pressing to showcase new and talented contemporary artists, predominantly from Asia.

Being a small gallery, Ota’s exhibitions always feel like they’ve been curated with love, with every last detail thought through. From Nirvana to Catastrophe: Matsuzawa Yutaka and his ‘Commune in Imaginary Space’, a recently closed exhibition demonstrated this perfectly. Displaying previously unseen works and personal items of Matsuzawa Yutaka, the founder of Japanese Conceptualism, the passion of the curator was palpable, making the exhibition experience brilliantly captivating.

3331 Arts Chiyoda is housed within a re-purposed high school; a huge multi-storey building with room for exhibition spaces, workshops, shared offices, a cafe and stores. The enterprise is run by a collective of artists who are committed to creating a community-focused gallery, where everyone is welcome to get involved.

There are typically five different exhibitions per month from a diverse range of artists. What drives 3331 Arts Chiyoda is a radically interdisciplinary approach, however, meaning on top of the exhibitions, the gallery has also created a rooftop garden for community use, has converted the playground into a lush public park and runs regular cooking classes. The gallery, overall, is a refreshing antidote to aloof galleries reserved for art-world aficionados.

Access: One minute from Suehirocho Station or eight minutes from Akihabara Station.

Mizuma Art Gallery was opened in 1994 with the express goal of providing some much needed international exposure for Japanese artists. With phenomenal success in this area, Mizuma has since expanded its remit, now also acting as a platform for international artists to display their work within Japan.

With two galleries in Tokyo, the original in the Ichigaya area and the second in Nakameguro, and now outposts in Beijing and Singapore, Mizuma Art Gallery’s success is self-evident. A visit to any one of the galleries promises an invigorating glimpse at some of the freshest contemporary art around, from up and coming talents and established names alike.

Housed on the top floor of Omotesando’s Louis Vuitton store, Espace Louis Vuitton is a glass-walled, light-drenched space looking out over the city, a place designed to encourage artistic daring and free expression.

Opened in 2011, the gallery follows in the footsteps of the Louis Vuitton’s first foray into the art world in Paris, offering Tokyoites a well-curated line-up of contemporary art from local and international artists, in the past including the likes of Alyson Shotz and Ernesto Neto. Currently, Espace is host to a solo exhibition from Dan Flavin, one of the leading figures in the Minimalist movement.

According to its owners, British illustrator Rob Kidney and Japanese designer Yoko Nagai, WISH LESS is “A space and studio in Tokyo where art, products, fashion and music live happily together” where visitors can “communicate and connect with like-minded individuals.” It’s a place unbound by one particular purpose, where anything goes and everyone is welcome.

The small space is packed with art, clothes and a whole lot more, and radiates good vibes, especially on the evening of an event, when revelers can be found spilling out into the streets. The exhibitions put on here are seldom dull, most often from young, talented and daring artists, in all kinds of mediums. Upcoming is a solo show from textile designer 441 (yon yon ichi) entitled Dig a Hole, which is unlikely to disappoint.

“Living with Photography” is the guiding principle of IMA, an organization that began life in 2012 as a photography magazine and has since opened up its own gallery/bookshop in Roppongi, the IMA Concept Store.

In its magazine, IMA profiles new and exciting art photographers from around the world, with the gallery continuing in this vein. The gallery also hosts regular workshops and lectures from photographers and leading figures in the art world. The concept store is open plan and atmospheric, plus there’s also a great cafe run by the Obscura Coffee Roasters to relax in.

Surviving the bombs of WWII and the frenzied redevelopment in its wake, the Okuno Building in Ginza is among the few remaining remnants of pre-war Tokyo. Its purpose today is thorougly modern, however, serving as a sprawling gallery and studio space for a host of artists.

At any one time, between 20 and 50 of the building’s rooms are open to the public, each displaying work that range from the traditional to the ultra-contemporary. Checking it all out can take hours, but you certainly won’t regret the lost time.

Bunkamura is a well-established and well-respected cultural complex in Shibuya, which since 1989 has provided a home for the city’s cultural avant garde and an accessible place for the public to discover it.

Consisting of a concert hall, museum, theater, gallery, cafe and art store, it’s a place where there’s always something exciting happening, where there’s always something to check out. The gallery can be found on the ground floor facing the Lobby Lounge and hosts around 30 different exhibitions every year, each designed to be accessible to a general audience but nevertheless challenging and innovative.

Take Ninagawa is another gallery that is helping to cement Tokyo’s place as one of the world’s foremost hubs of contemporary art. Names like Shinro Ohtake, Soju Tao and Misaki Kawai have all displayed here in the past, as well as a wide range of international artists, all bound by their common characteristic: innovation.

The art displayed here is challenging and bold, with curator Atsuko Ninagawa clearly at pains to ensure the gallery is at the forefront of the scene.