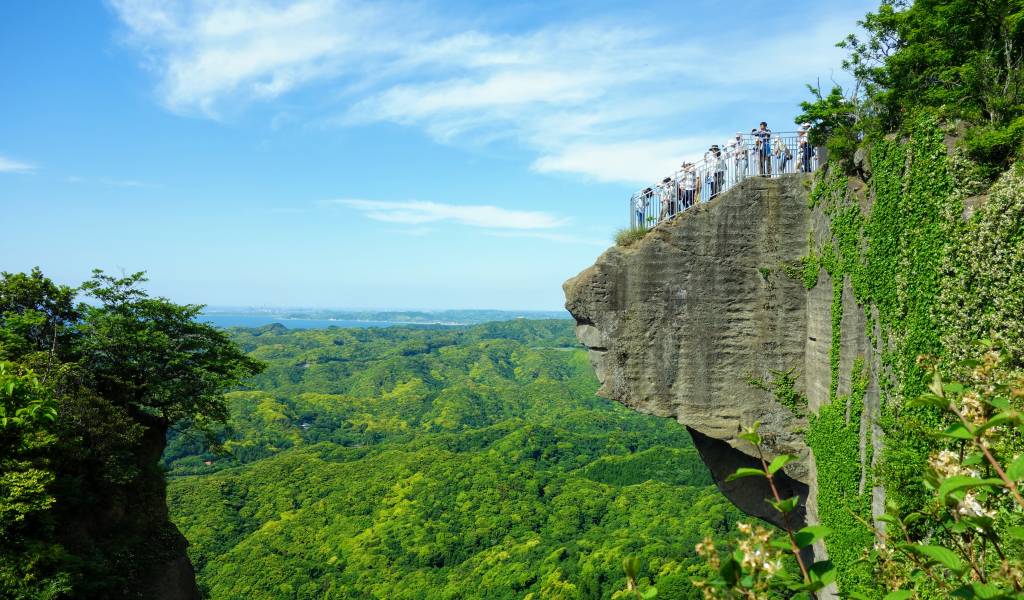 Nokogiriyama: A Hike to Hell (And Back)

Hiking trails provide a much needed escape from Tokyo, and although plenty of mountains have great views, not many are quite as death-defying as Nokogiriyama.

Located in the Boso Peninsula in Chiba, Nokogiriyama (aka Sawtooth Mountain) is a relatively easy hike, with a lot more than a view to reward you at the top. With two giant Buddhas, over 1500 arhat (many of which have been beheaded), temples and incredible quarry caves, this mountain is home to a myriad of adventures. The mountain derived its unique saw-tooth shape from years of quarrying and has been a Buddhist site for over 1300 years.

One great thing about Mount Nokogiri is that if you don’t fancy a hike in the hot sun, there’s a cable car to the top so you can save your energy for the explorations above. For options between hiking and taking the cable car, skip to to the ropeway section—but for all the reasons to go up in the first place, read on.

Jigoku Nozoki: The view of hell

Probably the most famous view of the famed Chiba mountain, this vertigo-inducing drop is safely railed off, but still feels daunting, making your heart beat just that little bit faster. The incredible views encompass Tokyo Bay, the Boso Peninsula and Mount Fuji, with incredible greenery and swathes of autumn leaves in fall.

There are multiple viewpoints here and a restaurant with glass walls so you can enjoy the view and not the wind, as well as a more open seated area.

There’s much more to this Nokogiriyama hike than a single view, however. Marvel at the largest cliff-carved Buddha in the country, view hundreds of small Jizo statues and follow the trail of 1,500 arhat to the 30m Goddess of Mercy…

The oldest place of worship in the Kanto region, Nihonji Temple is a Soto Buddhist temple built over 1300 years ago in 725 CE. The temple was originally a monastery and was home to well-known figures such as Roben, the founder of Todai-ji in Nara and Kukai, the founder of Shingon. Having changed from the Hosso Sect to Tendai and now Soto Zen, the temple has been abandoned and revived multiple times throughout the ages. With the anti-Buddhist movement leading to attacks and high levels of damage as well as fires breaking out after a large earthquake in 1939, the temple  has been undergoing restoration for most of its existence.

There are numerous halls across the mountain slopes, with the main building under restoration and inaccessible at this time, although there is still plenty to see. Entry to the temple grounds costs ¥600 for adults and ¥400 for children up to the age of 12.

As the largest cliff-carved Buddha in Japan, the Ishidaibutsu is an impressive sight, surrounded by trees and blue skies (if you’re lucky)—to call it imposing doesn’t even come close. Carved in 1783, the granite giant is twice the size of his Kamakura-counterpart and is a relatively new addition, built 1000 years after the temple was founded. Being the healing Buddha, he holds a container of medicine in his hand and if you bathe in the radiance of the emerald contained in it, your illness will be healed. There are wisteria-covered seats nearby that are perfect for picnic, drinks machines and a small counter selling charms and seals, so this is a good spot for a break on your walk.

To the left of the Buddha is a smaller Jizo statue surrounded by hundreds—if not thousands—of small white Onegai Jizo statues. Jizo is the guardian of children and the Bodhisattva of Hell. If purchased, the smaller statues can be used to wish upon before being placed at the foot of the larger Jizo.

The 1500 arhat are mortals who have attained enlightenment, and each has a unique facial expression, making them more interesting than you might expect. Perched along the rockface along the winding paths on the mountain slopes, the 1500 statues vary in size and shape, with many beheaded. During the anti-Buddhist Haibutsu Kishaku movement of 1868-1874, after the Meiji Restoration, many Buddhist sites were attacked and damaged.

The statues here suffered greatly, with many beheaded, but their bodies remain, some with repaired heads and some without. This adds to the uniqueness of each though, with the scars and cracks slowly growing over with moss ad softening over time. The trail requires a lot of steps, so you’ll be burning the next day, but it is worth it for the sheer creepiness of some of the faces, as well as the poorly considered “Mind your head” signs that rest above any cave-topped tunnels along the route.

Built in remembrance of those killed in World War II, the 30-meter depiction of the Goddess Mercy stands below the Jigoku Nozoki. Carved in 1966, the statue was carved straight into the rockface. If you stand just at the right angle you can see both her and the famed observation point at once.

There are two main hiking routes up Nokogiriyama, both taking around 50 minutes to reach the top and ascending the same side of the mountain. There are a few sites along each route but your decision may be made by the first glance at the steps vs. the winding path. The Sharikimichi route is to your left on the photo above and the Kanto Fureai No Michi route is to your right, up the steps.  Since both meet at the top, you will see the Edo-era quarry ruins on both.

The two trails are signposted but are quite unclear in some key spots, enough so that the map provides photo instructions as to what paths to follow at the key junctions. If you are hiking, try and make sure you have the section on the top right corner of this guide to keep track of where you are turning. Without it you may end up trapped in a vicious cycle of dead-ends and come stumbling out of a closed-off path past danger signs 2 hours later, much to the horror of a Japanese pensioner’s hiking group. You know, not that that’s ever happened to anyone here…

One of the best reasons to hike is to see the beautiful quarry ruins which have been taken over by nature and are pretty breathtaking in their enormity. The faint imprint of kanji on the walls and small Buddhas carved at impossible heights add to the abandoned feel, plus there are great opportunities for perfecting your echo voice. Along the Sharikimichi trail you can see the old transportation route for the quarried rock, with English information provided about the different techniques.

There are also viewpoints at the top of the hiking trail, with more fantastic views across the bay.

Since there is so much walking to be done at the top of the mountain, there is no shame in catching the handy ropeway to the top. Sanroku Station is about 10-15 minutes from the ferry port and has cars leaving every 5 minutes. You’re ferried straight up to Sancho Station where you can begin your walk across the mountain to see the sights, with a full circuit taking about 90 minutes.

A return ticket is ¥950 and a single is ¥500 for adults, with cheaper tickets for those aged 6-11 and groups. The ropeway only takes about 5-10 minutes and you get some great views of the bay and mountain. The ropeway starts at 9am and runs until 4pm (Nov 16th to Feb 15th) or until 5pm (Feb 16th to Nov 15th). During unspecified ‘summer’ months, it runs till 6pm, giving you a little more mountain time, but best to check this at the office on the day you travel.

Be sure not to miss the last one though, or you’ll end up having to take the final car with the station staff and all the trash, if you’re lucky. Again, that definitely did not happen after a near-vomit-inducing sprint once the ‘going home’ music began playing.

Getting from Tokyo to Nokogiriyama

By train, the journey takes 2 hours from Tokyo Station to Hamakanaya Station.

You can catch the Sobu Line Rapid to Soga, Kisarazu or Kimitsu Stations and change to the JR Uchibo Line (toward Tateya). Get off at Hamakanaya Station. In full, it costs ¥1,980 one way.

The ropeway is a short walk from the train station as are the hiking routes.

You can drive using the Nokogiriyama Tozan Expressway from coastal route 127 if you have access to car, and there is parking around the town.

Getting from Yokohama to Nokogiriyama

From further south of Tokyo, it’s actually easier to travel to the island by ferry. Simply catch the Keikyu Line to Keikyu-Kurihama Station (just over half an hour, costing ¥430). From there, catch the number 8 bus (from right outside the station, number 7 on your way back) to the Tokyo-Wan Ferry Port. This takes about 10 minutes and costs around ¥200.

At the ferry port, you can purchase your ticket from the desk or vending machine (English available) for ¥900 yen one-way or ¥1,600 return. These last for 2 days and 7 days respectively, so if you’re planning to stay overnight you can still travel back. The ferry times and information can be found here.

Once you arrive on the other side, you can follow the road to your chosen route, or to the ropeway, which is signposted. (Basically, turn right out of the port car park and follow the road, turning left when you see the sign, around a 10-minute walk).

For more trails to blaze, see our post on 10 popular Tokyo hikes.

Open with Maps
Written by: Lily Crossley-Baxter
Lily's Tokyo favorites are: Shirohige Cream Puff Factory, Anata No Warehouse, Todoroki Valley
Filed under: Outdoors and Nature | Things to do
Tags:
Sharing
Questions or comments about this article?
Start a thread on our community forum
Ask our local experts about Tokyo