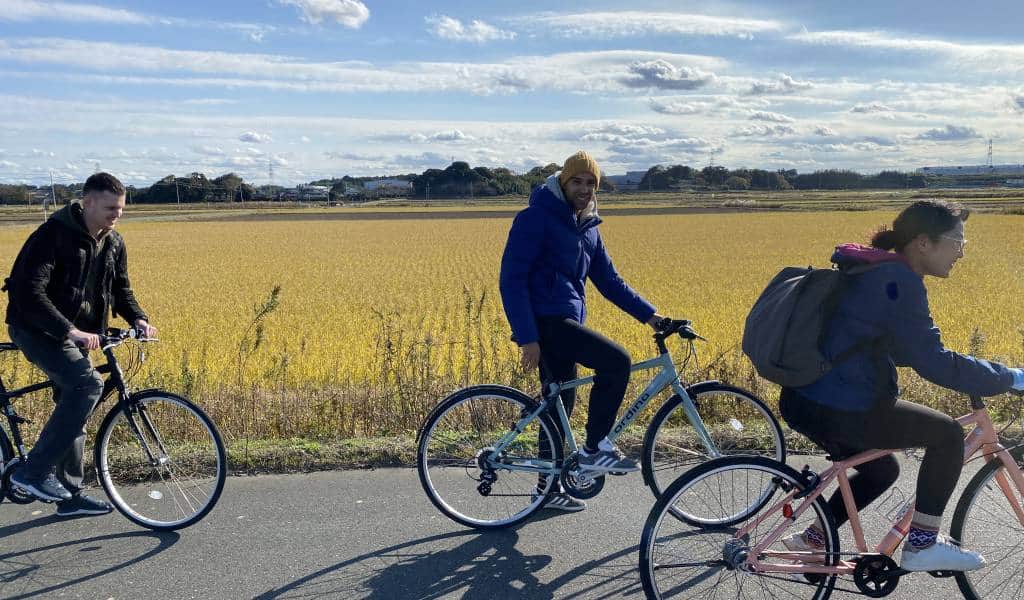 People tend to overlook Ibaraki Prefecture when planning short trips from Tokyo, but it’s time to change that. Just over an hour away from the capital, Ibaraki has a lot to offer in the way of outdoor activities, relaxation and dining. One of the best (and most affordable) ways to explore Ibaraki is by bike—and here we’ll help you do just that.

Fun fact: Ibaraki is often mis-spelled and mis-pronounced as Ibaragi, even by Japanese people!

While you can pedal through Ibaraki Prefecture on your own set of wheels with a DIY itinerary, a small group tour is often easier, especially if you aren’t much of a cyclist, can’t decide where to go, or are just looking for a quick activity for the family. One cycling tour we like is the following overnight trip to Inashiki City, which includes a mix of natural and cultural highlights, and is suitable for all levels of fitness.

Former Tokyo-ite Fujiko Yamamoto runs a fun cycling tour of the countryside from spring through fall, to introduce visitors to the charms of her new home—Inashiki City. Small groups of up to four participants can hop onto bicycles and go on a relaxed ride through the rurals, taking in some spectacular views along the way. 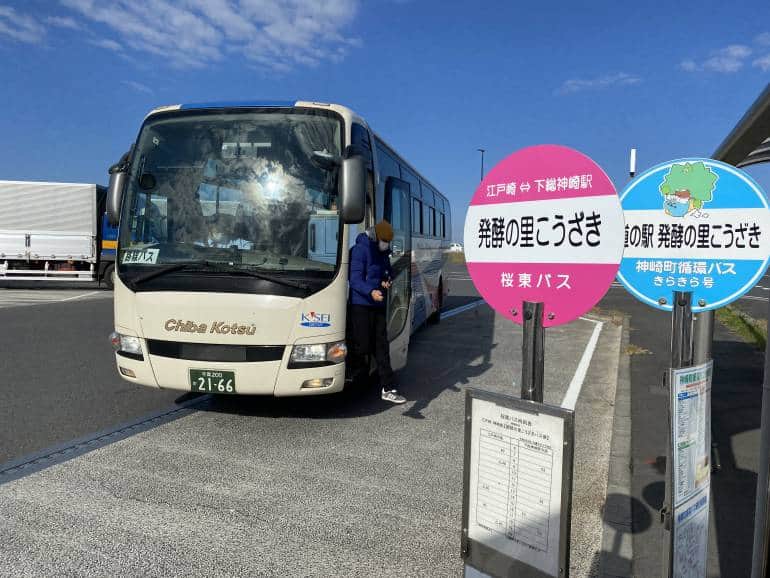 Pick-up at the bus stop

The tour begins at a highway service station called Hakkou no Sato Kozaki (発酵の里こうざき), which is just an hour and ten minutes by highway bus from Tokyo Station (you need to arrange the bus tickets on your own).

Yamamoto-san herself will pick you up from the Hakkou no Sato bus stop in the morning, and shuttle you to the farm-style house where you’ll be staying for the night. It’s a 15-minute drive.

Check in at Inashiki Nest

Called Inashiki Nest, Yamamoto-san’s guesthouse is a traditional Japanese affair, complete with shoji (sliding paper doors) and tatami mats. Newly renovated, it’s a comfortable place to call home—and, side note, some people do: you can actually book the house for long stays, unrelated to the cycling tour. It’s a 40-minute drive from Narita Airport, and is equipped with wifi, making it a feasible base while you figure out your next steps in Japan. 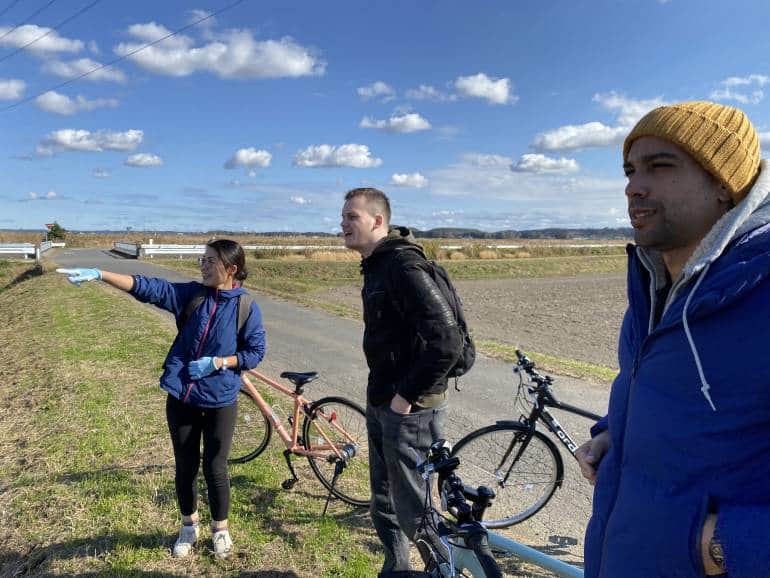 Ride through the rice paddies

Back to the cycling tour—after dropping off your bags at Inashiki Nest, it’s time to grab a bike and get going. Yamamoto-san or another guide will lead you along peaceful, quiet country roads surrounded by rice paddies. These form part of what is known as the Kanto Plain—the largest plain in Japan.

Cycle along the lake shore

Next up is a twirl along Ring Ring Road—a dedicated cycling route that runs along Lake Kasumigaura. Fun fact: this is the second-largest lake in Japan. There are loads of photo opportunities here, and if the weather is on your side, you might even be able to snap a picture of Mount Tsukuba over the lake.

Ring Ring Road is part of a whopping 180 km bike course, but on this tour you’ll only be peddling around a small section of it. The total distance you’ll be covering on the tour is 18 km, most of it flat (except for the climb up to Osugi Shrine at the end). 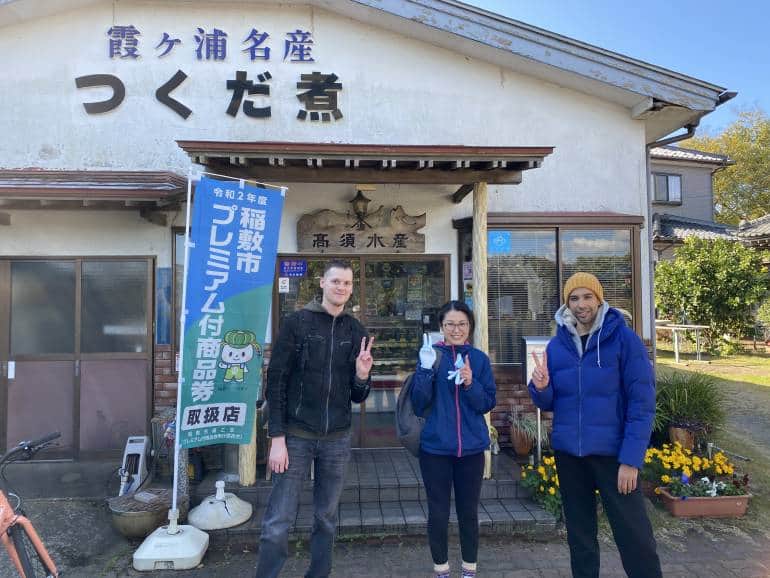 On the way to lunch, after the lake, you’ll get a chance to sample some tsukudani at a local store. Tsukudani is a traditional type of preserved food that is simmered in soy sauce, mirin and sugar, among other ingredients, to create a salty-sweet taste. Among the delicacies on offer is something called dried ice fish, which comes highly recommended. 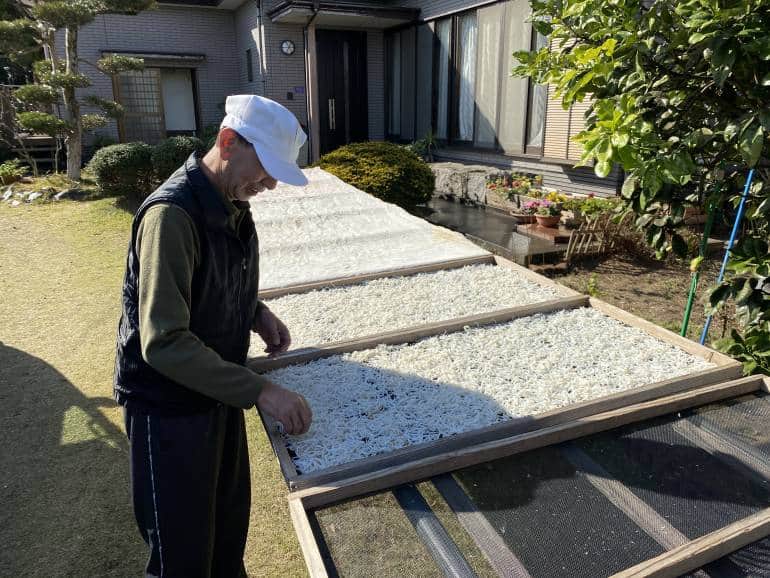 The tsukudani are just to whet your appetite; your actual lunch will be a bento box from the popular family-run Miyamoto Shoten store nearby. The proprietors—like most people in Inashiki City—are friendly and welcoming, so don’t be afraid to try to speak to them in Japanese! 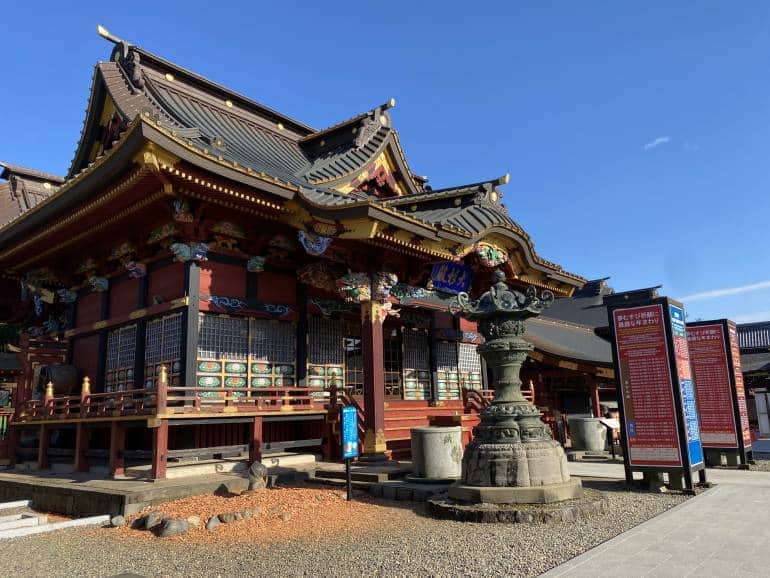 Make a wish at Osugi Shrine

After lunch, it’s onwards—and upwards—to Osugi Shrine, the last spot on the itinerary. Believed to have been founded in 767, Osugi Shrine is a place folks go to make wishes. It’s dedicated to the god of dreams, Anba-sama, and so, according to local legend, visitors’ dreams might just come true. The unusual shrine is a lovely, colorful place to end the day. 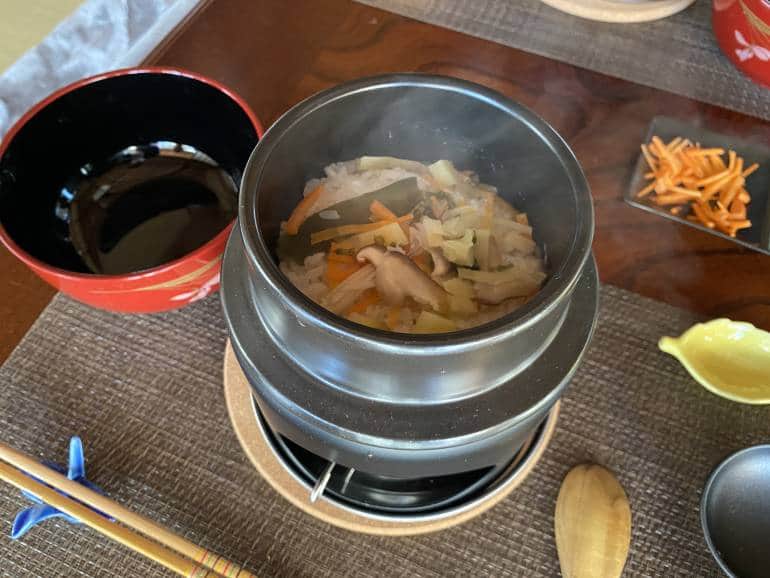 Back at the guesthouse, you’ll enjoy a communal meal of kamameshi, a dish of rice and vegetables cooked in a heavy iron pot, called a kama. In the morning, you can expect a simple breakfast of cereal, after which Yamamoto-san will take you to the Hakkou no Sato bus stop, so that you can catch the highway bus back to Tokyo.

Price: Approximately ¥15,000 per person, subject to change
Bookings: Tour website
Participants: 1-4
Minimum age: 12 years old (must be able to handle a 27-inch bicycle)
Availability: From March onwards. Closed from the end of December to the end of February.
Weather policy: The tour will be cancelled in the event of heavy rain.
Not included: Highway bus tickets to and from Tokyo Station.

Bonus adventure: Inashiki is not far from Ushiku City, where you’ll find the tallest Buddha statue in Japan. If you want to extend your stay in Ibaraki, the Ushiku Daibutsu is worth a visit.