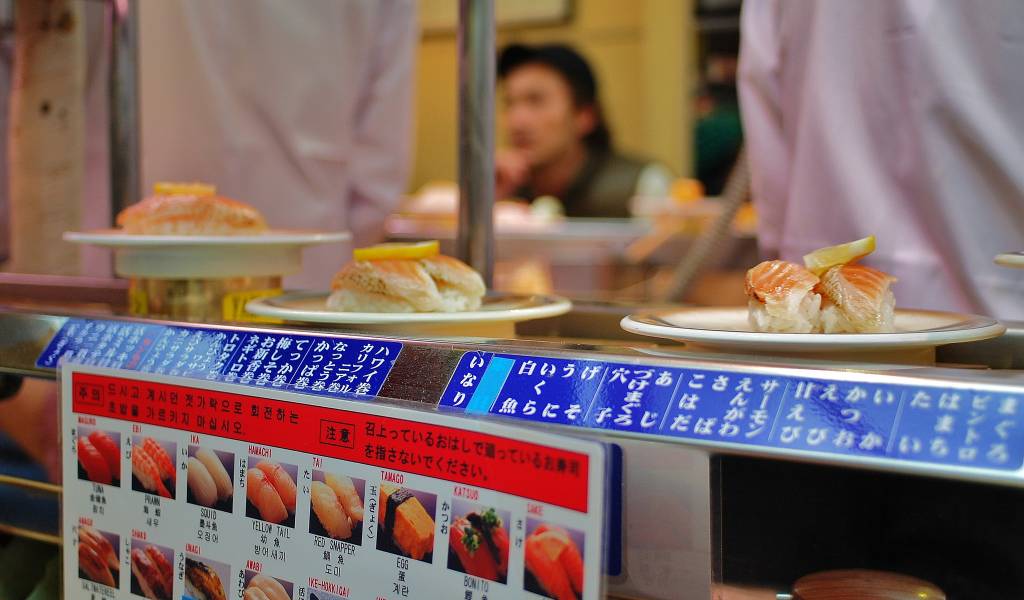 Ikebukuro has been praised time and time again for its cheapo credentials. No surprises, then, that Ikebukuro is one of the easiest spots in Tokyo to pick up some budget-friendly sushi. Our five favorite Ikebukuro sushi joints (plus handy map) below.

With their claim to be the “No. 1 conveyor belt sushi restaurant in Japan”, this place is asking to be brought down a few pegs. Unfortunately, it’s hard to find fault with Katsu Midori. Well, apart from the often daunting queues that can be found outside. If you’re there at a peak time, you’re looking at a 30-60 minute wait (there are chairs if that’s any consolation).

Inside, most of the seats come with a personal iPad to order from, or you can pluck a passing plate from the belt. The quality is top drawer and the portion sizes generous, plus prices begin at 100 yen per plate. The affordability of Katsu Midori makes it very much a budget restaurant, but the charming interior and excellent fish mean it doesn’t feel at all down-market. Found in the 8th-floor food hall of the Seibu department store (right above the station), it also couldn’t be more convenient.

For a more thorough look at Katsu Midori, take a look at our dedicated article.

Just two minutes from the West Exit of Ikebukuro Station, Tenkasushi is another budget option that is well worth seeking out. A place for a hot date or a long, reflective meal this is not; the atmosphere inside is rather frantic, with people seemingly far more concerned with eating than making small talk. It is, then, ideal for a speedy, no-frills bite to eat.

Don’t be deceived, however, the quality of the fish here is hard to argue with and most of the plates are priced at just 140 yen. Moreover, this is one of the most foreigner-friendly sushi joints going, complete with translated menus. Unless you want something specific though, you may not need the menu at all, with the rotating belt never being short of options. Rumor has it that if you head here between 14:00 and 18:00 or after 21:00, you can get your hands on ootoro (a fatty, usually pretty pricey cut of tuna) for the bargain-basement price of only 140 yen.

If you want somewhere backed up by the weight of reams and reams of rave reviews, somewhere that is very unlikely to disappoint, Midori Echika is the Ikebukuro sushi joint for you. It’s only small, with room for maybe 12 people at once, meaning queues are a common fixture outside. You might get lucky if you turn up outside peak times (roughly 11:30-13:30, 18:00-20:30) or you could go for the take-out option which is available all day long.

Right next to Exit C6 of Ikebukuro Station, it’s beyond easy to find and there are picture menus for those without much in the way of Japanese skills. The fish is noticeably fresh and there are plenty of options to choose from, including some very good set deals. Prices are almost disconcertingly low, meaning you can have a satisfying meal for less than 1,000 yen.

Kura Sushi is a well-known chain in Japan, with the Ikebukuro location found on the east side, opposite the Muji store. Again, it’s popular, so you’re probably going to have to wait to get in. Make sure you get yourself a ticket from the machine at the entrance, on which will be printed the estimated time that you’ll be seated and a number. When the time arrives, your number will be called out and you’ll be shown inside.

Once inside, there’s one more obstacle to overcome before you can sit down. You’ll be asked if you’ve dined at Kura Sushi before and whether you know how to open their patented plastic boxes in which the plates of sushi are delivered to your table. Incredibly, if you answer no you’re given a demonstration and told to practice yourself. Don’t worry, it’s as easy as opening a plastic box.

When you’re finally at your table, you can either pick plates off the belt or make your own orders via the touchscreen in front of you. Service is prompt, the sushi fresh and prices are pretty low. Another quirk of this place: for every five plates you eat, you get the opportunity to win a small capsule with a toy inside using the automated plate collector at the end of your table. What will they think of next?

Our last budget sushi pick keeps things simple. Uogashi Nihonichi is a standing sushi bar, crammed into a tiny cupboard-like room under a minute from the station’s West Exit. There are just three small standing tables and a counter to choose from (though chances are you’ll have to squeeze in wherever there’s space), the latter giving diners the chance to see the sushi masters do their thing from close range.

From the outside, it looks like a slightly scary local place, where your lack of Japanese ability will become embarrassingly apparent. Don’t judge a book by its cover, in actuality, it’s very foreigner-friendly, with an English menu and plenty of pictures. The specials board is not translated but try your luck and it’s unlikely you’ll be disappointed. Prices are incredibly reasonable, starting at just 100 yen.

Sushi restaurants in Ikebukuro:
Ikebukuro
Written by: Jack Heslehurst
Filed under: Eating & Drinking
Tags:
Sharing
Questions or comments about this article?
Start a thread on our community forum
Ask our local experts about Tokyo