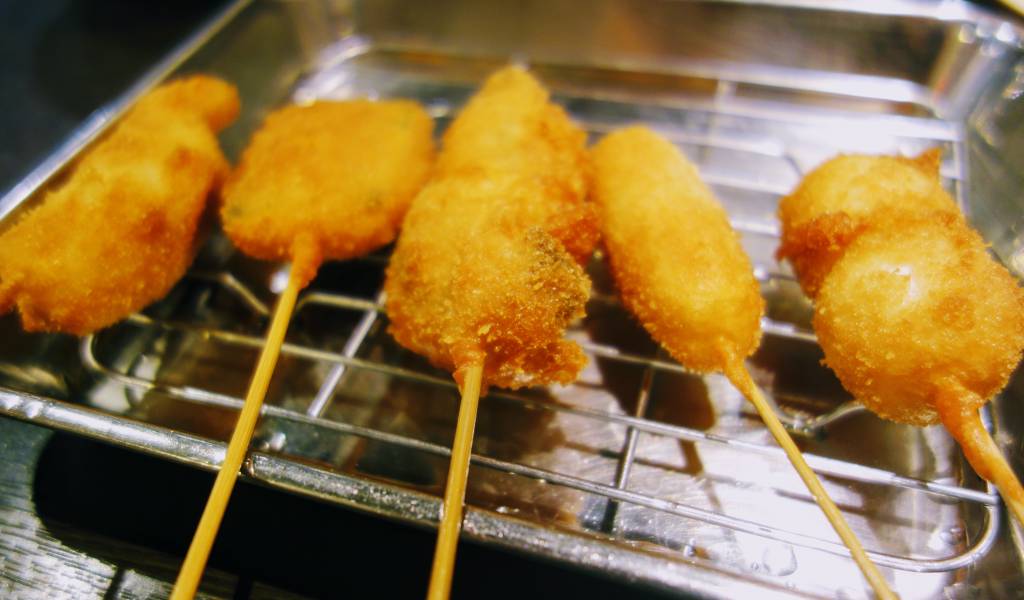 A Winner Every Time: Eating, Drinking and Testing Your Luck at Kushikatsu Tanaka

Looking to get your junk food on in Tokyo? Don’t fancy a giant bowl of rice with that pork cutlet? Enter the humble kushikatsu.

Fried meat, fish or veggies, on a skewer, dipped in a rich sauce. It’s got all the hallmarks of greatness. Variation. A crispy coating of panko (Japanese breadcrumbs). Delicious, delicious sauce.

As with many of Japan’s most delicious junk foods, it’s an Osaka specialty. Apparently created by vendors as a way to bulk up cheap ingredients for local laborers, the style came to dominate the gaudy Shinsekai area of Osaka before making its way to Tokyo and beyond.

There are plenty of fashionable upmarket places these days, but the most widespread no-frills option is Kushikatsu Tanaka, with locations all over Tokyo, including Shibuya, Shinjuku and Ueno. Prices start from ¥100 per skewer, up to ¥200 for premium ingredients.

Fried foods and alcohol are a winning combination, so it’s no surprise that Kushikatsu Tanaka attracts a boozy crowd. If I’ve got noisy friends to entertain and I don’t trust them in a more traditional establishment, a kushikatsu joint is usually a solid bet. Beers, highballs and sours (shochu-based mix drinks) are the usual go-to served cheap and super cold.

Curiously enough, I’ve also seen a lot of families earlier on in the evening. It’s rare to see children in restaurants in Tokyo (at least at the kind of places I frequent, I guess), but for whatever reason I’ve seen my local place full of parents with young kids. Maybe it’s somewhere parents feel less judged. Maybe the ritual of dipping is engaging. Maybe it’s just an easy way to sneak veggies into kids’ diets. Whatever the reason, there’s a chance you’ll be sat near a group of youngsters. If you take your own children, be prepared to sit near smokers.

The beauty of kushikatsu lies in its simplicity. The only real variable is in the quality of the ingredients. For that reason, you’ll find most skewers have a single filling—perhaps two. The set courses are a cost-effective way to sample a few different types of kushikatsu—especially if you have a hard time making decisions.

Fresh vegetables play a starring role in kushikatsu, making this a low-stakes way to explore veggies you might not see too often in your home country. Obviously the oil and sauce offset most of the health benefits—but who knows? It might just keep scurvy at bay for a while. Alas, it seems that everything goes into the same oil, making this a poor choice for strict vegans and vegetarians. The same goes for shellfish—so if you’re allergic to shrimp, oysters or scallops, you may be out of luck.

Many of the ingredients are obvious, but If you’re going a la carte, there are a few noteworthy items:

Boy do I like it when there are rules to tell me in no uncertain terms when I’m doing something inappropriate. None of that unwritten code of conduct malarkey!

There are three golden rules that apply in every kushikatsu place I’ve visited. Apparently, I look like a rulebreaker, because the first thing servers do whenever my food arrives is triple-check I understand them.

The big one. You dip your skewer once, that’s it. Once you’ve taken a bite, keep that skewer away from the sauce. The sauce is communal—and not just for your table. Whoever comes next (probably) doesn’t want to be eating your spittle, so keep it to yourself.

You’ll get trays of cabbage leaves free of charge—whether you ask or not. As with your skewers, they go in once. The obvious workaround is to tear pieces down to size before dipping. I’ve also seen people using their cabbage as a makeshift ladle to spoon extra sauce onto their kushikatsu.

3: Keep those chopsticks out of the sauce

Seeing a theme here? Unlike yakitori (skewered chicken) which can be removed from the skewer with chopsticks for easier sharing, each piece of kushikatsu is a personal experience. If you do plan to take it off the skewer, under no circumstances let your chopsticks touch that sauce!

I’ve never personally seen anyone break the rules. But I’ve seen the speed and urgency with which people can move when somebody (read: me) accidentally crosses the threshold into a shoe-free zone. Expect a little fuss if you screw it up!

Perhaps the quirkiest aspect of Tanaka is the dice game. Just say “Chinchiro” to your server and they’ll bring you a pair of dice. Roll an even number and you get your next regular drink half price. Roll an odd number and you’ll get a mega-sized highball—but for twice the price of a regular. Roll a double and you’ve won a free drink. Good luck out there, you beautiful cheapo hustler!