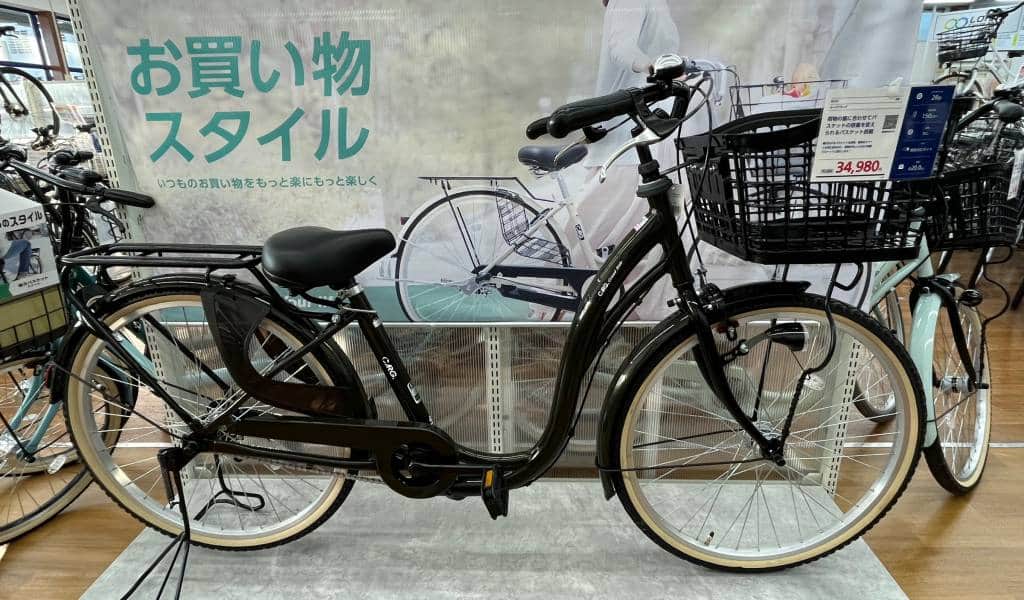 The trusty ‘shopping bicycle’ is ubiquitous in Japan. It’s used for the daily commute to school and work, carrying kids across town, lugging groceries, and taking in the local landscape. You might be familiar with its nickname, mama-chari. Here’s what you need to know about the 2-wheeler; how shopping bicycles came about, as well as handy tips for purchasing, riding and parking.

What is a mama-chari? A brief overview

Mama-chari or ‘mom’s bike’ is essentially an everyday utility bicycle, characterized by a comfortably low-positioned frame (usually double looped L or U shape), easy-hold handles, a kickstand stopper, and a basket. With the right fitted seating, it can also accommodate 1 to 2 children. These days, the bicycle usually comes with an in-built lock and key, and friction-powered light.

Why is it called a mama-chari though? There’s a bit to unpack behind the friendly yet stereotypical colloquialism.
Although bicycles were introduced to Japan in the late Edo period (1603–1868), it wasn’t socially acceptable for women to ride bicycles until nearly a century later. Since bicycles were intended for men, they used to be large, heavy, and relatively expensive.

During the Shōwa period (1926–1989), in the 1950s, bicycle manufacturers needed to pivot as the demand for traditional bicycles dwindled. Finally, it was time for a bicycle to be designed for the needs of women.

The light frame and low center of gravity of shopping bicycles made it easy for women to hop on and off, as well as ride with stability, even with groceries or children piled onto the front or back. So, the first mama-chari models were really a means to empower women in their daily lives.

As the convenient and practical shopping bicycle gained popularity across Japan, it has also evolved from being just a mama-chari to becoming the common mode of transport for many Japanese. Today, the shopping bicycle is just as much for mothers as it is for fathers, youngsters, and elderly, in Japan and even overseas.

When looking for shopping bicycles, you’ll probably see them categorized as ‘city bicycles’.

We’ve got a list of some of the best shops for buying a new bicycle in Tokyo, as well as great spots for reconditioned bicycles. If you’re here for a short visit or only need the occasional ride, you can also rent bicycles.

If you’re after something more sporty or suited to longer distances, you can check out road bikes or cross bikes, too. And don’t forget foldable bicycles; they’re handy if your usual route requires you to take your bike on the train.

As they say, rules are rules, and for good reason. Although on the decline, there were still 67,673 bicycle-related incidents in Japan (according to a 2019 survey by the National Police Agency).

So while you might notice that not everyone will abide by them, it’s important to be aware of the rules and do our best to keep ourselves and others safe. Here are a few special mentions and tips:

You can read more on bike rules at this page on the Japanese Government website (in Japanese).

Space always proves to be a challenge in Tokyo, but there are a range of solutions when it comes to parking your bike. Bicycle parking can be free or paid, outside or covered, multi-storied or underground. Generally located where you need them; look out near the train station, outside the supermarket, or at the rear of buildings.

You can also find bicycle parking near you using Churin or Navitime (in Japanese). For innovative solutions, you can check out robotic underground bicycle storage such as those by Eco-Cycle and Cycle Tree.

At under ¥5,000 for the year, insurance can be a worthwhile investment, to protect yourself from being sued by the person you run over on your grocery-laden bike.

Between insurance marketplace websites Hoken Ichiba and Hoken Kakaku.com, here are a few of the most popular options:

There are also couples and family insurance plans. Interestingly, while bike insurance isn’t yet compulsory in Tokyo, some prefectures and towns have made the move to mandate it, including Saitama, Kyoto, Osaka, Hyogo and Kagoshima.

Whether the shopping bicycle has won your heart or not, you might have a new appreciation for this staple of transport in Japan. While you’re at it, make sure to check out some awesome routes for exploring Tokyo by bike.