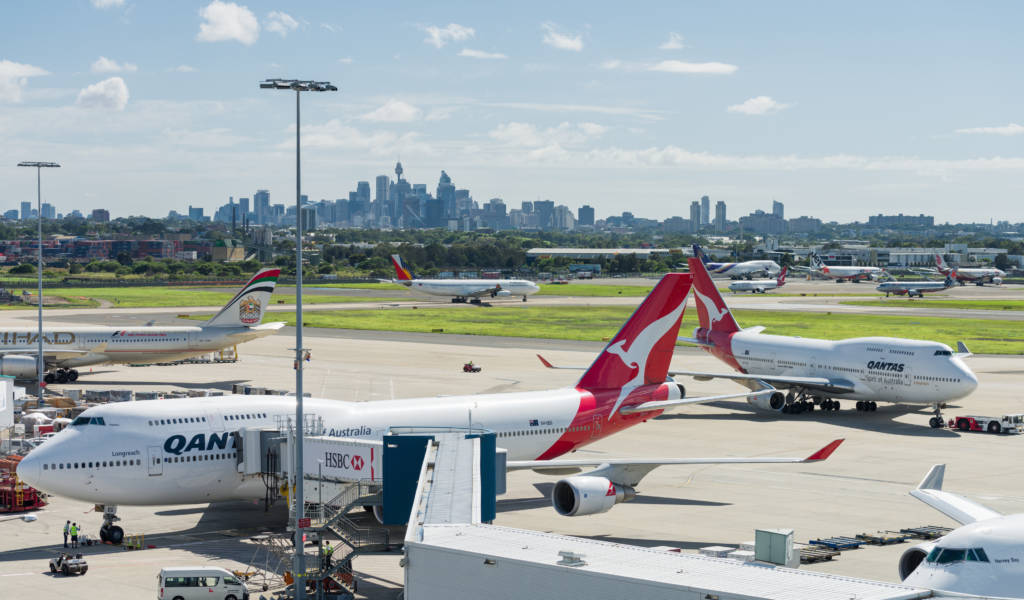 Getting the Cheapest Flights Between Sydney and Tokyo

The Sydney to Tokyo route is a favorite for travelers from down under, as it’s short and well-served by airlines (there are three direct flights a day). You pretty much board, have a quick bite to eat, doze for a bit, and you’re in Japan’s capital—ready to party, do business, or both. Here’s the lowdown on low-cost air travel between the two cities, as well as a few ideas about what to do you when arrive.

On a direct flight from Sydney to Tokyo, you’re looking at just 9.5 hours of air time—making this one of the most chill routes between the two hemispheres. There is one flight from Sydney Airport (aka Kingsford Smith) in the morning, which gets you into Tokyo in time for dinner, and two flights that depart in the late evening, so you can roll right off the plane and into Shibuya for breakfast.

Looking for travel insurance for your trip? Read our guide to Japan coverage.

Opting for a flight with connections (domestic or other) can save you some dough, but will also add an extra 3-26 hours to your travel time (it’s usually somewhere in the region of 10-12 extra hours, if you choose flights carefully). If you’re going to do indirect, your best (and least exhausting) options are routing via either Beijing or Guangzhou, Singapore, Kuala Lumpur or Ho Chi Minh/Hanoi. Going via Bangkok is also a viable option, particularly if you are keen on a brief sojourn to Thailand as part of your trip.

JAL, Qantas and ANA are your choices when it comes to direct flights from Sydney to Tokyo, with JAL operating the early bird option. Unless you are extremely loyal to one of the brands, we recommend perusing the prices on Skyscanner and simply opting for the cheapest of the three at any given time.

If you’ve got time and travel energy to spare, taking an indirect flight from Sydney to Tokyo can save you 300AUD+ (depending on the season and booking options). Your first (and least lengthy) choice is to fly via another domestic airport, like Cairns or Melbourne. This opens up more Qantas flights, as well as access to cheapo carrier Jetstar (don’t forget to pack a blanket and some sandwiches). You can also go through a South-East Asian country on carriers like Air China, China Southern, Air Asia, Thai, Vietnam and Singapore Airlines.

Our advice is to try and keep your travel time to a maximum of +-20 hours to avoid collapsing in a heap of exhaustion upon arrival. Sometimes saving those dollars just isn’t worth the crate of energy drinks you need to recover. Also, try and avoid anything with more than one stop (unless it’s a domestic+international connection combo).

A quick word of caution, too: Non-protected self-transfers are no good. These arrangements require you to re-check in your baggage at your transfer point, and also put the responsibility of catching your onward flight entirely in your hands. If you miss it for some reason (like your first flight being delayed), you could be asked to buy another ticket on the spot. Transferring from one airport to another at a connection point (e.g. in Shanghai) is also less than awesome.

Best time to fly from Sydney to Tokyo

Because Ozzies are heading into the Northern Hemisphere, the seasons get flipped and you can double up your summer (or winter, for your cold cheapo heart) if you like. Tokyo is most comfortable (and picturesque) in spring and autumn, but is perfectly good to visit in summer (as long as you’re okay with saunas) and winter too (occasional snow alert).

You just might want to avoid the following peak (and pricey) periods if you’re on a tight budget/agoraphobic/both: cherry blossom season (late March to mid-April), Golden Week (the series of national holidays at the end of April/early May), the New Year period, O-bon (in mid-August) and, though less crowded, Chinese New Year (around February).

Choice of airports: Narita or Haneda?

While both Narita and Haneda Airports are perfectly good when it comes to touching down in Japan, Haneda is the more convenient and modern of the two. If you have a choice between them for the same price, we recommend going for Haneda. You’ll thank us as you enjoy your much-quicker transfer into Tokyo proper. Narita is out in neighboring Chiba Prefecture, making the transfer time into the city a bit longer and more expensive. For more details, have a look at our articles on the cheapest ways of getting from Haneda to Tokyo and the cheapest ways of getting from Narita to Tokyo.

The reverse route: flights from Tokyo to Sydney

Obviously, it’s also possible to start in Tokyo. Who’d have thought it, right? In case you are starting north and heading south, be of good cheer: various direct and indirect flights are available between Japan and Australia.

Among the cheapest of these are LCC carrier flights such as those operated by Scoot, Jetstar and Air Asia, which might be slow (think two stops, in Thailand and Singapore) but come in at between ¥63,000 and ¥71,000 or so. These are all indirect flights, and the usual caveats apply, especially the whole make-sure-you-don’t-have-to-change-airports-halfway thing we’ve mentioned above.

Direct flights from Tokyo to Sydney are of course much faster — better if you need to get home in a hurry or if you’re on business — but proportionately more expensive. ANA, Qantas, and JAL all offer direct flights from Japan to Australia’s opera city for between about ¥116,011 and ¥373,617.

Always keep in mind that ticket prices change according to demand, so some months are obviously better than others if you’re watching your dollars.

Tokyo as a short stopover

If you’re thinking of hitting up Tokyo on your way to some other cool (but probably less cool, let’s be real) destination, do it! Even 24 hours in this crazy city is enough to catch a glimpse of what it has to offer. Check out our Haneda Layover Guide and our Tokyo in 24 Hours Itinerary for ideas of what you might get up to. Our list of 101 Cheap and Free Things to Do is useful for putting together slightly longer itineraries.

Flying in from even further down under? Check out our guide to Getting the Cheapest Flights from Auckland to Tokyo for advice.