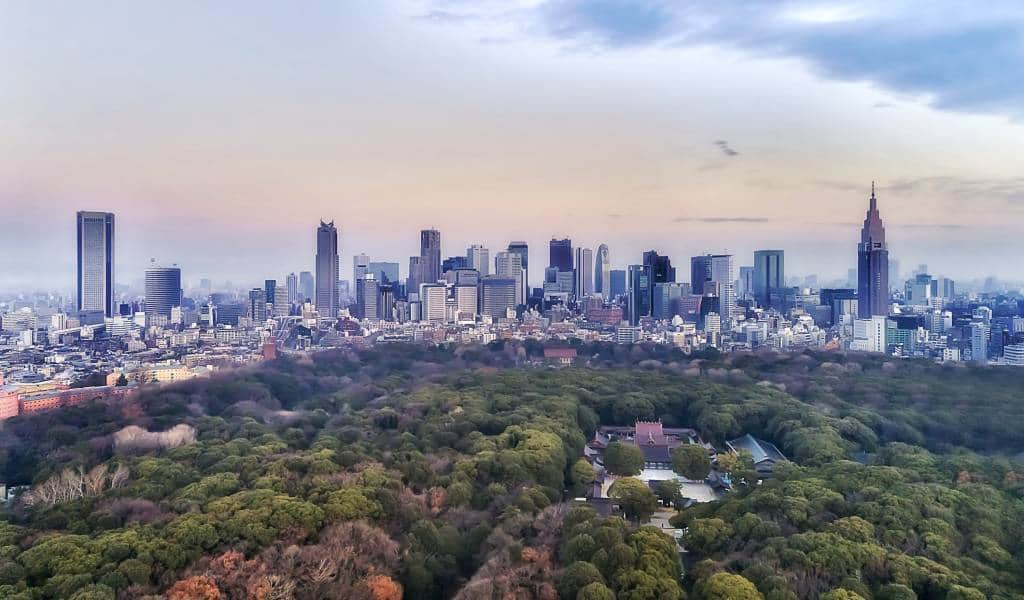 Anime Tours: The World of Your Name, Makoto Shinkai, and More

Being the creative mind behind the best-performing anime film of all time, Your Name, and other titles such as Weathering with You and The Garden of Words, Makoto Shinkai’s work has become a cultural phenomenon. In November 2022, the animator released his newest film titled Suzume no Tojimari (すずめの戸締まり) which has already raked in 10 billion yen at the Japanese box office in just a few months.

Who is Makoto Shinkai?

Born in Nagano, Makoto Shinkai started his career as a video game animator and then went on to produce feature films from the end of the 1990s. He gained critical acclaim with his film 5 Centimeters Per Second in 2007, but it was Your Name in 2016 that led to Shinkai becoming a true household name, with him even being dubbed the ‘New Miyazaki’. Although Shinkai’s and Miyazaki’s films are similar in some ways, with both of their films focusing on the environment, religion and culture, Shinkai’s speciality is his ability to animate the real-life settings of Tokyo, down to the finest detail.

According to this 2016 interview, the animator is said to have been inspired by the many aspects of everyday life in Japan. Many of the locations featured in his films are places you can visit and most likely are already on your bucket list. Plenty of tourists have already taken it upon themselves to explore the different real-life locations featured in their favorite animes.

This following guide provides a perfect itinerary for those who want to visit the places seen in Your Name, Weathering with You, The Garden of Words and 5 Centimeters Per Second.

This film follows the characters of Mitsuha and Taki, both high-school students living in different parts of Japan, who are trying to navigate the fact that they start randomly switching-bodies. In 2017, Your Name officially became the highest-grossing anime film of all time, achieving a massive $380 million in ticket sales.
Since its release, many fans visiting Tokyo have made it their mission to visit all the locations which appear in the film.

Having once been a Gozutennou Shrine and Inari Shrine in the Edo period, the two were eventually enshrined together in the Meiji period and became known as the Suga Shrine. It is regarded as the guardian of the eighteen different districts of Yotsuya.
Although the shrine itself is not featured, the stairs leading up to it have become iconic due to the final scene taking place here. For many, this is the most important location to visit since it is the most recognisable and the perfect place to snap a recreation of the famous scene for socials. Who knows, just like in the film, when walking down these stairs fate may play its part and you come in contact with a special someone.

Located near the entrance to Shinjuku Gyoen, Cafe La Boheme is an Italian-ish restaurant with European-inspired interiors and a reasonably-priced menu. Its atmosphere is both relaxed and casual, with the mezzanine and large windows giving it an airy and open feel.

In the film, the restaurant is named ‘Il Giardino Delle Parole’, which translates to ‘the Garden of Words’, a nod to Shinkai’s previous film. Although in Your Name, the outside of the restaurant is not a carbon copy of the real-life location, Shinkai still wonderfully captures the inside interior and atmosphere. When dining in Cafe La Boheme you’ll notice the staff wear the exact same uniform which the character Taki wears. 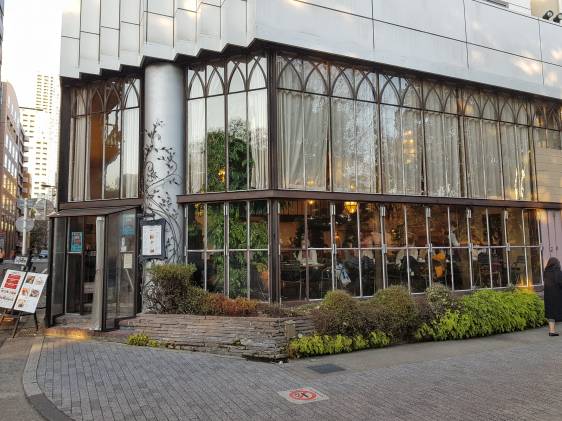 The National Art Centre Tokyo in Roppongi is not only home to some unique artwork but a stylish cafe known as Salon de the Rond. Whether you are wanting a quick bite or simply to take in the surrounding views, Salon de the Rond is an ideal place to relax and unwind during your visit to the museum.

This cafe is briefly featured during the scene where Taki goes on a date with his work colleague, Okudera Miki. Given that both the location is great, and the menu is slightly on the pricier side, Salon de Thé ROND makes a great date spot. 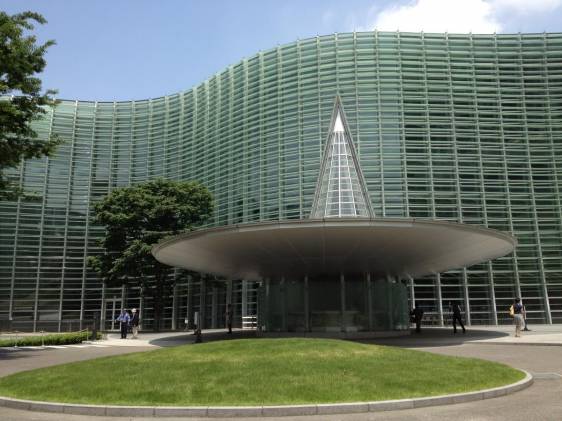 Released in 2019, Weathering with You focuses on the two main characters Hodaka and Hina and a period in which Tokyo is experiencing an unprecedented amount of rain. Hina is a ‘sunshine girl’, meaning she has the ability to change the weather, but with this comes consequences. This film can be seen as Shinkai’s commentary on climate change and how the weather affects people and their lives.

In the film’s trailer, Koenji Hikawa Shrine is featured momentarily. Appropriately, this is a shrine where people go to pray for good weather. There is a shot of the different emas, the wooden plaques used to write prayers, which are in the shape of geta, Japanese wooden sandals. A short walk from the south exit of Koenji Station, this shrine also hosts many annual festivals and events.

When Hodaka first moves to Tokyo, he ends up in Shinjuku and the Kabukicho neighborhood. Although this area has a reputation for being sketchy and is depicted as a rough place in the film, it is home to the famous Golden Gai and a variety of host bars, pachinko parlors, and restaurants to explore. Though we recommend being alert and staying out of trouble when visiting, unlike Hodaka was in the film.

Despite there only being a brief shot, the bird’s-eye view shown of Shibuya is one worth seeing in real life. Shibuya Crossing is arguably one of Tokyo’s most iconic landmarks. For the best view, see our article. 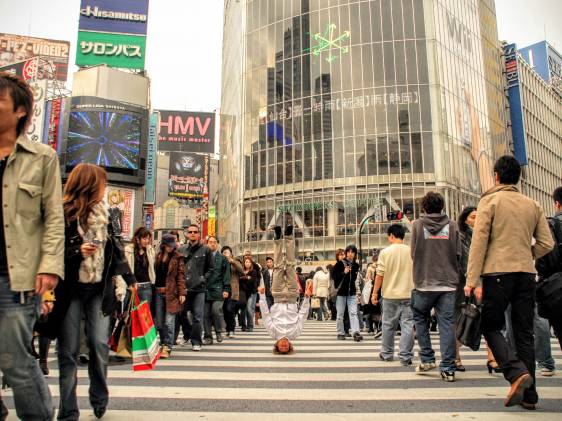 There is a heartwarming scene in Weathering with You which takes place in Shiba Park. Located right near Zojo-ji Temple, this public park is a great spot to take in the views of Tokyo Tower and the surrounding city landscape. 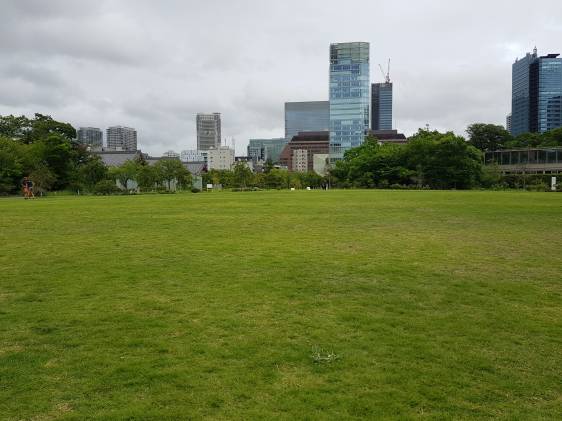 One of the most memorable scenes takes place near here. When Hina shows the world her power to change the weather, you can see the Rainbow Bridge in the background. Though you may not be able to witness such a dramatic weather transformation as the one in the film, the views at night still offer a sight to behold. 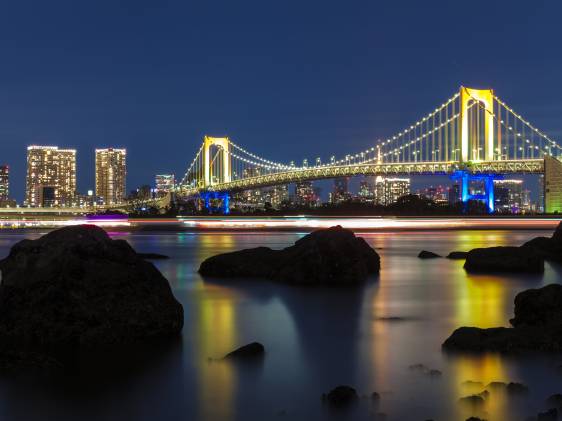 The Garden of Words (言の葉の庭)

Shinkai’s 2013 film, The Garden of Words is about Takao Akizuki, a student and aspiring shoemaker, and his repeated encounters with Yukari Yukino, a 27-year old woman, who never tells Takao about herself. Over the course of the film the characters form a bond and unknowingly help each other.

As the title implies, the majority of this film takes place in a garden, with that garden being Shinjuku Gyoen. Famous for combining nature with the city landscape, Shinjuku Gyoen is the perfect place to see seasonal flowers, picnic with friends, and explore the different global gardens.

In one of the scenes, you can see Takao enter the park through the ticket gate, after paying his ¥500 admission fee, and walking past some of the different areas of the park. It is at the small pavilion located in the Japanese garden where the characters first meet and continue to encounter each other throughout the film. You can see people reading and relaxing in the pavilion, it’s an ideal spot to take in the views. 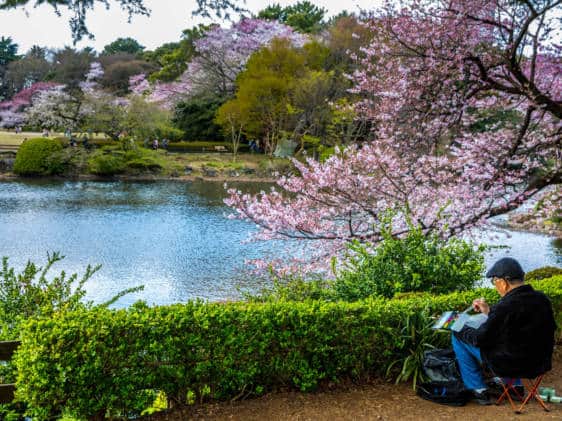 Although there are other locations seen in the film, Shinjuku Gyoen is the primary one where most of the plot takes place and progresses.

A romantic drama, 5 Centimeters Per Second centers around Takaki Tono and Akari Shinohara, two individuals who meet in elementary school and start to develop feelings for each other. Eventually the two characters move away making it hard for their relationship to develop. The film follows both characters dealing with this change and their unresolved feelings.

A Shinto shrine which can be found in Shibuya, Yoyogi Hachiman shrine is dedicated to the war god Hachiman and was founded in 1212. It is best known for its surrounding natural scenery which differs vastly from the city landscape which surrounds it. The gardens near the shrine are where the two main characters share fond childhood memories.

This skyscraper building, which is the 4th tallest in Tokyo, is seen quite a few times in the last part of the film. Unfortunately, you can’t go into the building itself but you can admire the way it lights up at night and how it stands out from the rest of Shinjuku’s buildings.

Notably, the Docomo tower is actually seen in Weathering With You, Your Name and the Garden of Words as well. The iconic building has been featured prominently and appears to be Shinkai’s main symbol of Tokyo.

Mentioned in this article
Written by: Jane Pipkin
Filed under: Anime And Gaming
Tags:
Sharing
Questions or comments about this article?
Start a thread on our community forum
Ask our local experts about Tokyo