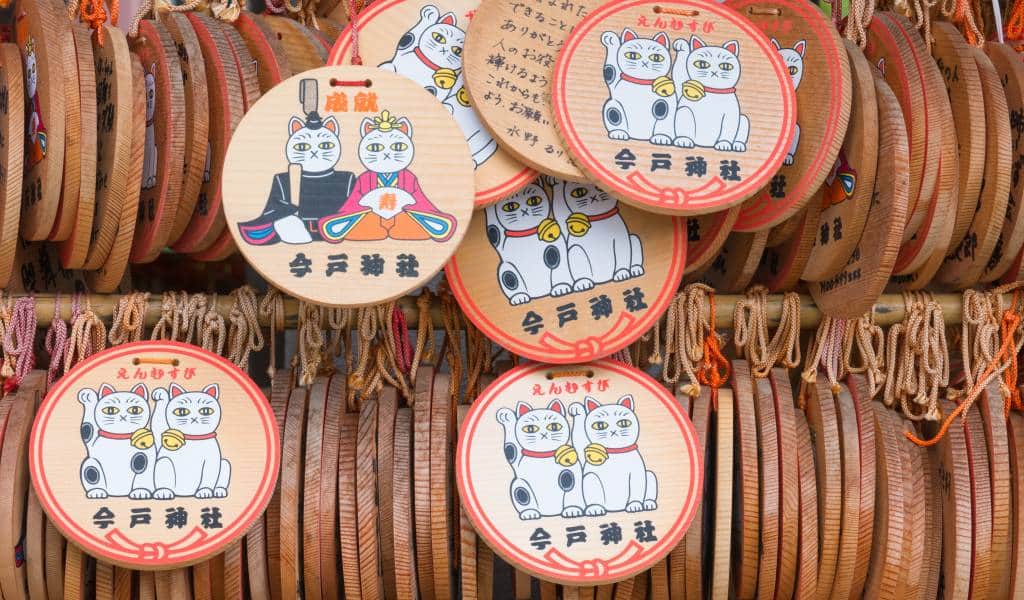 Romance and marriage are something many people want, but both can be difficult to find. If you’re looking for love, you may want to consider visiting one of the many “love shrines” Tokyo has to offer. It is believed that if you visit one of these shrines, the deities of love and marriage will hear your wish and your luck in love will improve.

The following list offers a brief description of Tokyo’s top love shrines as well as the best route for visiting them. Although it may be difficult to see all of these in one day, this guide gives you a good starting point and is ideal for anyone who is getting tired of waiting around for their perfect Tinder match.

When visiting a shrine, there are several practices which should be followed. Firstly, when going through the torii gate, it is customary to stay on the left or right side as the middle is the designated path for the gods. After this, there will be a purification basin where you should wash your hands and mouth before heading towards the shrine. Though it should be noted that due to COVID, this custom has been changing, with many shrines closing this section. See more in our guide to visiting shrines and temples.

Located in the heart of Tokyo, Hie Shrine is not only one of Tokyo’s five major shrines but is also popular with couples looking to bring more blessings into their relationships or marriage. Moreover, Hie Shrine is an ideal place for singles who are looking to establish new relationships and meet new people, since it’s a famous spot for encouraging enmusubi, meaning a love knot.

Despite being surrounded by a built-up urban environment, Hie shrine offers a peaceful escape from the busy every day. As you first approach the shrine from the south, you are met with an impressive concrete torii gate emblazoned with the kanji for Hie Shrine. Once at the top, you’ll see the main shrine as it stands out from its backdrop consisting of towering skyscrapers. Once you enter the inner shrine, you’ll notice a statue of the shrine’s main guardian. Unlike many other shintō shrines which have a dog guardian, Hie shrine’s main guardian is a monkey known as Masaru. If you are looking for some luck in love, it is recommended to rub the left side of Masaru. After this, you’ll want to take the exit to the right of the main hall, and head behind the shrine to the rear entrance and walk through the famous red torii gates. 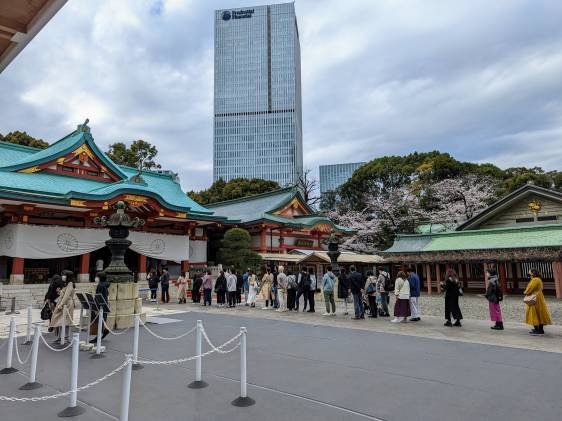 As another one of the five major shrines in Tokyo, Tokyo Daijingū is popular among those who are hoping to tie the knot and to secure a long happy marriage. Originally built in 1880, this shrine was built to allow those living in Tokyo an opportunity to worship major deities like mythical founder of Japan Amaterasu-sume-ōkami, without having to travel to the Grand Shrine of Ise to do so. One of the main reasons Tokyo Daijingū is visited by lovers is because it is home to several deities which bring personal growth into one’s life. Significantly, Tokyo Daijingū was the first shrine to officiate a Shinto style wedding ceremony, establishing its reputation as the best place to visit to improve your chances of finding romance.

The grounds are peaceful and beautiful, especially during the spring when the cherry blossoms are in full bloom. Architecturally, the shrine is similar in style to the Ise shrine with one of its most distinctive features being the purple curtains above the shrine. The shrine is typically filled with young women buying omamori (お守), good luck amulets, as well as leaving ema (絵馬), a votive tablet on which you write down your wishes to be heard by the enshrined kami. 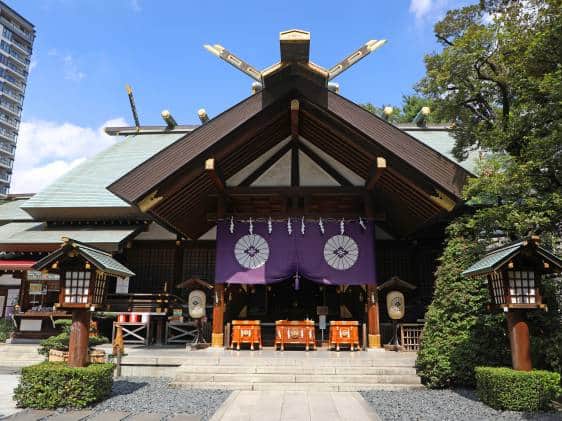 One of Akasaka’s most visited shrines, Akasaka Hikawa Jinja has a reputation of strengthening connections and bringing lovers as well as friends together. It is also the perfect place to pray for a good marriage match, since three deities of marriage are enshrined here. Besides this, the shrine holds a special monthly ceremony to pray for good fortune in love and romance.

Although the shrine looks simpler in design compared to some of the others on this list, you will feel at peace being surrounded by luscious greenery and colorful flowers. The grounds also include a variety of smaller shrines including the Shiawase Inari Shrine. Another highlight is the 400-year-old gingko tree which looks especially beautiful in the spring and late autumn season.

Significantly, Akasaka Hikawa Shrine is one of Tokyo’s 10 major shrines and its goshuin shrine stamp, is a must-have for collectors. 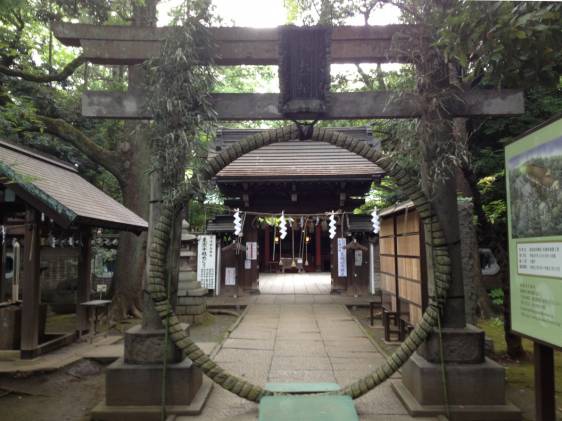 Located in close proximity to Asakusa, Sensoji and Matsuchiyama Temple, is a moderately sized shrine called Imado Shrine. This shrine is most known for deities Izanagi and Izanami, the first couple to marry according to Kojiki, the ancient records of Japan. They are regarded as being guardian deities of love and marital relationships.

Notably, Imado is also the place from which the Manekineko (fortune cat) originated. As soon as you pass the torii gate, you’ll see several Manekineko as well as real life cats wandering the shrine grounds. The main shrine itself is also filled with manekineko figurines. This is one of the features which makes Imado such a unique and wonderful shrine to visit, even the omamori and ema feature the signature cat on them.

Tucked away in a residential area in О̄ta Ward is Nitta shrine, also known as the Shrine of Love. This shrine, named after 14th century samurai Nitta Yoshioki, is a secret gem which is said to bring luck to those who visit.

The grounds are filled with various modern artistic sculptures such as a ‘love’ stone statue, which looks similar to the one found in Shinjuku Island Tower, and a sculpture, inspired by the tradition of offering Hamaya, a decorative arrow which ‘breaks demons’ and which is also a lucky charm. It is said this love sculpture attracts people wanting to fall in love.

There is also a 700-year-old zelkova tree which has survived several fires and disasters. Many believe that if you touch the tree, you will receive good luck and longevity in life. You can also purchase heart shaped omamori here, which are said to further strengthen your chance of a surprise encounter. Although it is a little trek from central Tokyo, this quaint and quiet shrine is worth visiting as you are likely to receive a 2 for 1 offer, luck in both love and health.

Written by: Jane Pipkin
Filed under: Japanese Culture And Tradition
Tags:
Sharing
Questions or comments about this article?
Start a thread on our community forum
Ask our local experts about Tokyo