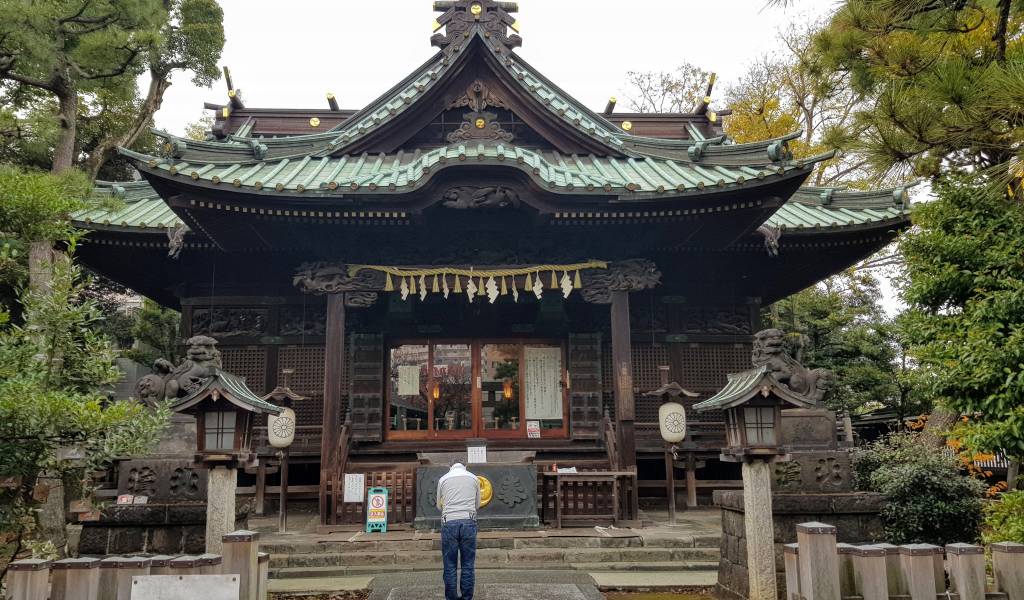 The Tokyo Cheapo Guide to Visiting Temples and Shrines

With Japan having so many temples and shrines (Kyoto alone is said to have over 2,000), most Japan sightseeing itineraries will have at least one on the agenda. It can be said that these places offer a glimpse of traditional Japanese culture (although some are trying their best to keep up with the times). Some even have historical value—as much as several centuries’ worth in some cases! They may have valuable relics, a distinct form of architecture that was the norm back in the day. So, even if you’re not religious, or you’re a believer of a different religion, visiting Japan temples and shrines can be appealing in terms of cultural and historical experience.

Regardless of your faith (or lack thereof), it wouldn’t hurt to conduct yourself appropriately when visiting a temple or a shrine. Perhaps you might even want to try going through the rituals. Here’s our guide to help demystify Japanese temples and shrines for you.

Know the difference: shrines vs. temples

While most Japanese are not particularly religious, they still visit temples and shrines as a way of observing tradition. Shinto shrines are where people usually go for celebrations of life, such as a birth or a wedding, while Buddhist temples are usually associated with death-related rituals, like funerals and visiting deceased loved ones. (Of course, for devout followers of both religions, there are many more ceremonies and rituals in between.)

Generally, it’s safe to say that many Japanese are not religious, but they still can be superstitious and/or have a sense of the spiritual. Some believe that certain shrines or temples are “power spots”— places with high concentrations of spiritual energy.

The Japanese term for “shrine” is “jinja” (神社). Thus, shrine names end with suffixes that have at least one of the kanji characters making up the term “jinja”:

Shrines have a gate called a torii at the entrance; this symbolizes a barrier between the sacred and the profane. They also have a purification basin filled with water for visitors to cleanse themselves before entering, and a pair of guardian dog statues called komainu is also a common fixture.

Temples are known as “tera” (寺) in Japanese. Joined with other characters, this becomes “-dera”, or the pronunciation changes entirely to become “-ji”—as in Kiyomizu-dera or Senso-ji (these can also be spelled without the hyphen). “-In” (院) is another suffix associated with temples (although this character is also used to refer to many other institutions!).

The main focus of worship at temples is Buddha himself. You can also find incense burners at a temple, and large complexes will usually have a pagoda as well.

Temples with shrines? Shrines with temples?

Yes, they exist, and that’s when things can get confusing! At some points in history, some temples were built on shrines, and vice-versa, which is why it’s not surprising that the lines between Buddhism and Shintoism can be blurry. The sprawling Kiyomizu-dera in Kyoto, for one, has a shrine on its premises.

Want to go through all the proper motions when visiting a shrine or a temple? Here’s how.

Bow before passing through the torii, and enter from the left or right side, as the central path is believed to be for gods.

Cleanse yourself at the purification basin by gathering water with one of the provided ladles—just one scoop of water will be good for the entire cleansing procedure. Next, pour water on your hands (starting with the left), pour some water into your left hand, and rinse your mouth with it. (Don’t drink the water or pour water from the ladle directly onto your mouth!) Lastly, keep the ladle clean by pouring the remaining water down the handle.

Toss a coin into the offering box. A 5-yen coin is best, as the Japanese term for 5 yen—”go-en”—is a homophone for “good luck,” and the hole in the middle is said to represent a clear view of the future. If the shrine has a bell, ring it, then bow deeply twice, clap your hands twice, say a silent prayer, and bow once more. Some shrines’ rites may require different numbers of bows and claps—for instance, two more claps after the prayer are common, too—but there will be signs to indicate any variations, so don’t worry.

Face the shrine and bow again before leaving the shrine.

If the temple has a gate, the same etiquette as mentioned above applies: bow first. Some temples also have purification basins, so follow the purification ritual above whenever applicable.

As for praying, the same rules as above apply—except that you don’t clap at temples. If the temple has an incense burner, it’s also recommended to burn incense as an offering.

Unless specified, photography is usually allowed around temple/shrine premises, except in front of the main shrine or altar (i.e. where visitors pray).

If just praying or paying your respects is not enough, you might want to take home a bit of good luck with you.

You’ll only want to take these home if you get a good fortune! Usually costing 100-200 yen, these strips of paper usually dispense fortunes and advice for various aspects of your life—a general reading, love, career, health, and so on. The best possible outcome is “dai-kichi” (大吉 – great luck), while the worst is “dai-kyo” (大凶 – great curse). In case of a bad fortune, you’re supposed to tie it somewhere in the temple (usually, there are designated wires for that) so that the bad juju doesn’t follow you home. (You’re more than welcome to spend more money until you get a good fortune, of course.)

Some temples and shrines have omikuji in English. The more famous with tourists the temple or shrine is, the more likely it is to have English-language omikuji.

Some also have unique, specific omikuji—Iidabashi’s Tokyo Daijingu has paper-doll omikuji and a blood type-based one. Yotsuya’s Suga Shrine, home to the iconic staircases featured in the hit anime movie Your Name, has a fan-shaped omikuji. Lastly, Meiji Shrine has omikuji featuring classical poetry written by the Meiji Emperor and his wife. Also, in an attempt to get with the times, you may even find some omikuji-dispensing vending machines.

These wooden plaques are for you to write your prayers, wishes, and messages on. You’re supposed to hang them at the temple or shrine, but it’s also perfectly fine to take them home. Akihabara’s Kanda Myojin, for one, has ema featuring characters from the popular Love Live! franchise; it’s common for fans to buy them as souvenirs.

You can buy omamori for yourself or as souvenirs—even if you’re not superstitious or religious, these can convey well-wishes to family and friends.

Omamori usually come in the form of cute little pouches with prayers or sutras inside (you’re not supposed to rip them open, though), but some shrines and temples sell them in different shapes, too. (Tokyo Daijingu’s key-shaped omamori, said to “unlock” the heart of your Mr./Ms./Mx. Right, is one example.)

There’s an omamori for pretty much everything—good luck in general, love, career/employment, studies, health, child-bearing, safe transportation, your heart’s desire, money, passing exams, happiness, traffic safety, warding off evil, success, and more. You might also find some pretty specific and unique omamori at some temples. Kanda Myojin, being located near the hub of electronics and geekery that is Akihabara, has an omamori to protect your gadgets.

You’re supposed to keep your omamori as close to you as possible, so attach it to, say, your bag or phone. It would also make sense to keep a money omamori close to (or in) your wallet; some omamori for wealth come small for this purpose.

It’s said that it’s best to not keep omamori for more than a year, because they supposedly lose their effect after a while. At the same time, it’s considered rude to the gods to throw an omamori away, so the right way to say goodbye to an omamori is to take it to a temple or a shrine. Of course, if you’re not a believer and/or you don’t have the time or means to visit Japan to dispose of an omamori, there’s no harm in holding on to an omamori for years. And if you lose your omamori, don’t worry too much. According to belief, it’s because the omamori is doing its job — protecting you from evil, about to grant your wish, or whatever. (Losing it on purpose, however, is a different story!)

Here are just some other lucky objects you might spot:

Note that some of these can only be found during certain occasions. Also, not every shrine or temple will carry all of these items. For instance, don’t expect the popular maneki neko it to be a fixture at every temple or shrine. (Head to Gotokuji at Tokyo’s Setagaya Ward if that’s what you’re looking for.)

Perhaps less known to non-Japanese is the practice of collecting shuin (go-shuin, if we’re to refer to it in honorifics), a seal or stamp unique to a particular temple or a shrine. If you’ve visited a temple or a shrine and seen people lining up with what looks like notebooks, they’re lining up for shuin. This practice is said to have originated in ancient times, when people received this stamp in exchange for donating a sutra.

Requesting a shuin will cost you 300 yen on average. (The fee, which goes to the upkeep, could be higher or lower, depending on the temple or shrine’s popularity or status.) This will get you the stamp in red ink, as well as calligraphy of the temple’s or shrine’s name and the date of your visit. If you’re into visiting as many temples and shrines as possible, this can be a way of keeping track of the ones you’ve visited.

You can’t just use any notebook or piece of paper for your shuin; instead, you’re supposed to use a shuincho, a blank book for the specific purpose of collecting these stamps. Most temples and shrines will have their own shuincho, so if you don’t have your own, you can start with that. If you have your own, you don’t have to buy a new one for every temple or shrine you visit, of course. You can also buy shuincho at stationery shops.

Temples and shrines around Tokyo
Asakusa Harajuku
Written by: Tiffany
Filed under: Sightseeing
Tags:
Sharing
Questions or comments about this article?
Start a thread on our community forum
Ask our local experts about Tokyo