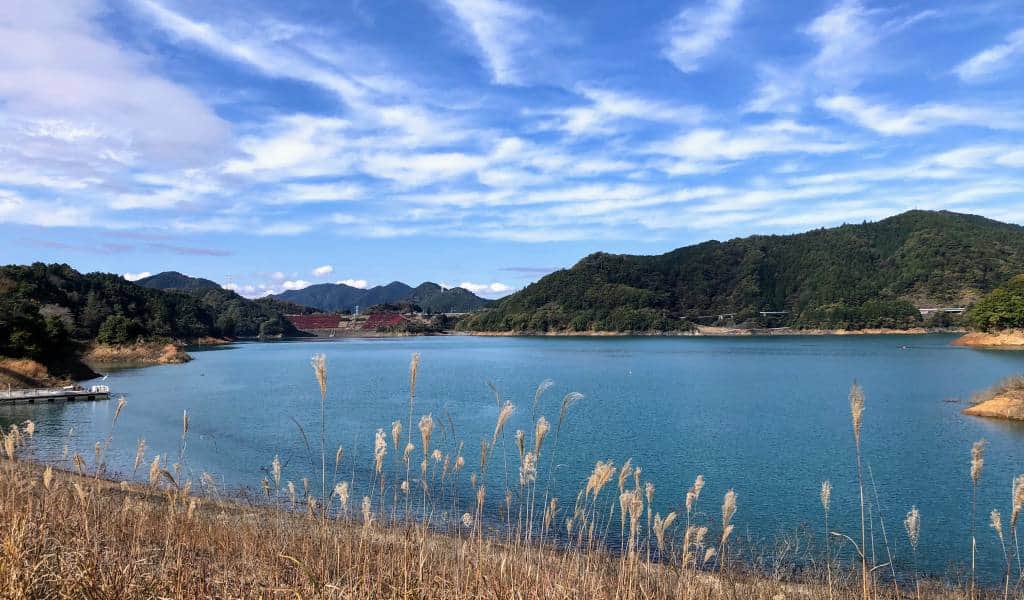 If you’re looking for a relaxing day trip from Tokyo or Kanagawa, Lake Miyagase is the place to go. Less touristy than the better-known spots like Enoshima, Hakone and Mount Takao, Miyagase makes a great getaway for solo travelers and families alike.

Though it’s actually a man-made reservoir (which supplies drinking water to Yokohama and Tokyo), Lake Miyagase, or Miyagase Dam, is a beautiful body of water in the middle of mountains, with hiking trails and wide open spaces where you can just sit and chill while the kids run around. Here’s what you need to know to have a fun day out at the “lake”.

Miyagase Dam straddles the areas of Atsugi and Sagamihara in Kanagawa Prefecture. Built on the Nakatsu River, the dam covers an area of approximately 4.6 square kilometers, and is surrounded by parks and trails, with views of the Tanzawa mountain range.

You’ll find information on how to get there at the end of the article.

What is there to do at Lake Miyagase?

This is a good starting point for exploring the dam area, as you have access to a bunch of restaurants (including soba, udon, curry, pulled pork and teishoku), small shops and a big picnic area. The opening times of the restaurants may change according to the day and season, but when we visited in November, they were open from roughly 11am – 4pm.

Kids can climb all over jungle gyms and the like, and can also go “grass sledding” down a sizeable hill. There is an outdoor stage, and you might hear some live music while you’re walking around. You can have a picnic in the large green area downstairs from the shopping street (watch out for opportunistic hawks, though), and from there it’s a short walk to the suspension bridge over part of the dam.

Sightseeing ferries (complete with pre-recorded details about the dam and its harmonious relationship with nature) depart from a small pier beneath the bridge (a 30-40 minute cruise will cost you about 1200 yen). These are actually quite fun, and provide different views of the reservoir and its wall.

If you time it right, you might be able to board a ferry across to Toriibara Park or the dam site, too. You can check the Miyagase Dam ferry timetable here (in Japanese). On maps of the area, there seems to be a canoeing course around the dam, but we did not see any evidence of this on the day that we went. Still, it’s worth enquiring about if that is something you are interested in.

Other things to see and do on the Miyagase Lakeside Park side of the dam include forest trails, the Kiyokawa Village Lake Miyagase Mizunosato Museum, and—on winter evenings—Christmas illuminations, which include a light tunnel on the bridge, and a giant Christmas tree. A road train runs around the Lakeside Park area.

If you want to see the massive dam wall, up close and personal, this is the place you need to be. You can actually witness the water being discharged if you plan ahead: this takes place on Wednesdays, the second and fourth Friday of the month, and the second Sunday of the month. There are two discharge times: 11am and 2pm, and each lasts for about six minutes. Water is discharged at about 30 cubic meters per second, creating a pretty mind-blowing artificial waterfall. There is no discharge scheduled between December and March each year.

The dam wall is 156 meters high, and if you want an even closer look, you can take the “Incline” cablecar up to the top. You might also want to pop into the Miyagase Dam Water and Energy Museum, where you can learn more about the construction and workings of the dam (which is one of the largest in the Kanto region).

Other things to do on this side of the dam include roaming around Aikawa Park, visiting the Aikawa Town Museum, making crafts, checking out the Aikawa Solar Park, letting the kids loose in the Adventure Forest, and strolling along more of those forest trails. There is also a restaurant where you can try a special dam-inspired curry. A road train runs around the area.

The main selling point of this part of the dam is the views it offers. There is an observation platform for panoramic photos, as well as a lakeside garden and small shop. Unless you’re one of those pros on teH Instagrams, though, we suggest starting with either the Miyagase Lakeside Park or the Aikawa Park side, and adding Toriibara to the itinerary if you have time.

Walking between the three areas

The three parts of the dam are connected via paved roads and forest paths, but the distance between them means you’ll need a sturdy pair of shoes, a decent level of fitness and plenty of water, if you want to try and walk.

Here is an English map of the entire dam area, from 2019. Note that some prices have changed, and times might have, too.

The easiest way to get to Lake Miyagase is to take a train on the Odakyu Line to Hon-Atsugi Station (about 47 minutes from Shinjuku), then hop onto a Kanachu bus bound for Miyagase. Just follow the directions to the Miyagase-direction bus stop, which is just outside the station, and settle in for a 60-minute ride. The last stop is the Lakeside Park. You can take Bus 20 or 21, and the price is ¥690 one way (half that for kids)—be sure to charge your IC card in advance.

The bus back to Hon-Atsugi leaves once an hour until about 8pm (do check the times before you go, though).

If you want to see the dam wall itself, you’ll need to take a different Kanachu bus. Board one bound for Yagai Center via Hanbara, and get off at Aikawa Bridge. From there, it’s a 15-minute walk. The fare is about ¥580 one way for adults, and half that for kids. Alternatively, board a Hanbara-bound Kanachu bus from JR Fuchinobe Station and hop off at the last stop (this bus ride also takes about 60 minutes). From there, it’s a 20-minute walk.

To access this part of Miyagase, you’ll need to take the #7 Kanachu bus bound for Toriibara Fureai Shop from JR Hashimoto Station, and get off at the final stop. The bus ride is about 50 minutes and costs ¥580 one way for adults (half that for kids).

If you have your own set of wheels or want to rent a car, you’ll have access to all three areas of the dam, and you’ll probably also have a shorter travel time (if you use the expressways, anyway). You can find more information for driving on the Japanese website for Lake Miyagase.

This is also an option for those with strong legs and good bikes. Lake Miyagase is both a popular cycling and jogging spot.

If you want to make a weekend of it, you can book a room at Miyagase Resort Ryokan Miharu, which is on the Lakeside Park side of the dam.

Looking for more day trip ideas? Flick through our guide to the top 25 day trips from Tokyo. You might want to check out these 14 hikes near Tokyo, too.